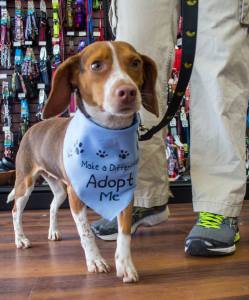 This morning I took Galina for a run with me. We went without Gracie, who has proved herself to be a less than ideal running partner. G did great, keeping up with me for 3 ½ miles. I’m used to running with much larger dogs. Maybe the best thing about running with a little firecracker like Galina is that when the Asplundh trucks roared by and she set off for the hills, I simply held tight to her leash and she ran at warp speed in place like Wylie Coyote.

G has had several days of firsts recently.

On Sunday she was scheduled to attend her first OPH “Meet and Greet” in search of her forever family. It was to be held at a local pet store. I wasn’t going to be able to accompany her for big debut because I was already committed at the exact time (of course) to give a presentation on my new book about 30 minutes away. Although I’d love my fulltime job to be fostering sweet little puppies, it’s actually writing and selling books, so my event trumped Galina’s. Bummer.

All week I worried about her upcoming event. Many times when Galina meets new people, she is nervous and hangs back until the new friend either produces a treat or gets down on her level to greet her. I know G is a happy, adorable, lovable, super-smart, fun little beagle, but would strangers be able to see that in a busy pet store with lots of other dogs/people/toys/treats/activity around her? I worried she wouldn’t shine.

I was feeling like a mom who was going to miss her child’s little league debut, so we spent Saturday afternoon preparing her.

We took her to the Pet Shoppe nearby which has a dog wash and a dog café. I’ve walked past that dog café section many times over the years and thought, “What kind of crazy person takes their dog out to lunch?” But now, I was excited at the prospect of sitting down with Galina for treats and visits with other doggies.

G entered the store bravely, happy to be with us and game for whatever adventure we were setting off on. But the moment we entered the store she was startled by a very talkative and large bird behind the register who greeted her with a loud squawk that might have been “hello” or might have been “get the heck out of here you furry overeager canine before I peck your eyes out.” Galina hesitated, but followed us in, creeping very low to the ground with one eye on the life-threatening raptor. We walked past the cat enclosure where several cats who were easily Galina’s equal in size and weight gave her an unconcerned once over and didn’t bother to even move away from her sniffing nose.

All was well until I lifted her up to place her in the dog wash. To put it mildly, she was not a fan of the dog wash. Considering how happily she splashes in puddles, I expected her to enjoy the water, but she strained to escape the entire time, gagging on the collar that held her and shaking like a leaf. I soaped her up and rinsed her as fast as I could. The hair dryer pushed her beyond the brink, so we skipped that step and toweled her off as best we could.

Next we bought her some bacon-infused treats and took her to the dog café. She relaxed and happily gobbled up her reward. We hung out for a while, but alas, no other dogs came in. I suppose we were too late for the lunch crowd.

Here’s Galina looking out the window of the dog cafe, hoping for a friend to stop in. (I think she closely resembles a prairie dog in this shot)

Looking for people to interact with, we stopped in the beer store next door and took her to a Guinness tasting. She was all about this, even sampled some Guinness (and liked it!). She was friendly with the other people, even though they had no treats to offer. 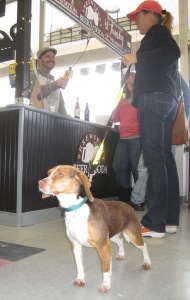 That was as much as I could do to prepare her. It would have to do. She was shiny clean and she’d had a positive treat-filled experience out on the town. Hopefully Sunday would go well and she’d have a fun time even if I wasn’t there. I coached my husband on talking up her finer points and he packed a bag of her toys to take along.

The next day I went to shuck books and Nick and Ian took Galina to the Pet Valu for her premiere. As soon as I finished speaking, I checked my phone and was rewarded with a picture of Galina wowing the crowds (at least in my mind).

Ian reported that she was the friendliest dog with other dogs and made a few friends. Nick said a few people came in to see her and she was on her best behavior, but just like me at my Jr. High dances, no one asked her to dance.

I made it for the last ten minutes and was happy to see Galina engaging with everyone. She was wearing a little blue bandana and wrestling with a dog about Gracie’s size and temperament. All of the dogs but one, were twice Galina’s size, which made her seem even smaller than she is. But I was proud at how she held her own, busily casing all the humans for treats and inviting all the other dogs to play. She even let them put a silly little leprechaun hat on her. What a trooper.

When we got home, Galina napped for three hours. She was wiped out. I was too. It’s hard to be “on” for all that time, presenting your best self and trying to get people to like you. It’s hard work being an author or a foster dog, but I think we both had a good day. Even if I still haven’t made the best-seller list and G hasn’t found a forever home.

Somehow, I think she might beat me to the goal line on this one. At least I hope she does.

2 thoughts on “My Little Debutante”