Fiona, the puppy formerly known as Pigweed, took off for her forever home. Chuggy (and the rest of us) are missing her. Minutes before her adopters arrived, she and Chuggy had one last King/Queen of the Frank Bed battle and I captured it for posterity. My phone is clogged with these videos because every time I witnessed them I wanted to share them with the world, but despite my best intentions and most likely, because of my limited technical abilities, they remain trapped on my phone. You’ll have to stop by if you want to watch any others.

Life got much easier this morning. As cute as they are, Pigweed and the rest of the puppies were a LOT of work. Chuggy is not. He is a delightful and gracious house guest. I’m afraid the puppies have been upstaging him during his time here, so let me properly introduce him.

First off, Chuggy Alabaster has more expressions than your average dog. Sometimes he can look at you like he knows exactly what you’re thinking, and once more, he agrees with you.

Sometimes, he can look very weary. As in, he’s so sorry that I have to be burdened with him. He’s a polite guy and there are moments when I’m cleaning something up (generally a puppy pee), when he truly seems to feel bad that I’m having to do something so undignified because of another member of his species.

Sometimes he looks manic. Like when he starts on a crazy tear with Pigweed and can’t stop gnawing on her ears. He also gets this look when dinner is about to be served. He’s not pushy like so many fosters before him, but he is SO READY. The moment the bowl hits the ground, he’s on it. 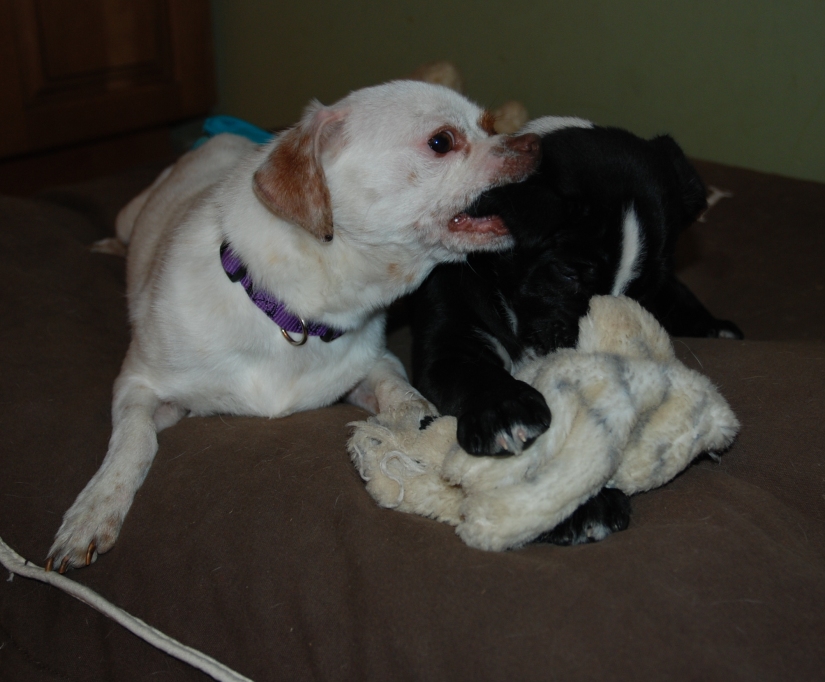 Sometimes he can look concerned. I’ll call his name, which he seems to know a little, and he’ll cock his head, as if to say, “Might you be talking to me? I’m not sure I know exactly what it is you’re saying?” (I also imagine Chuggy has a British/Bronx accent.) 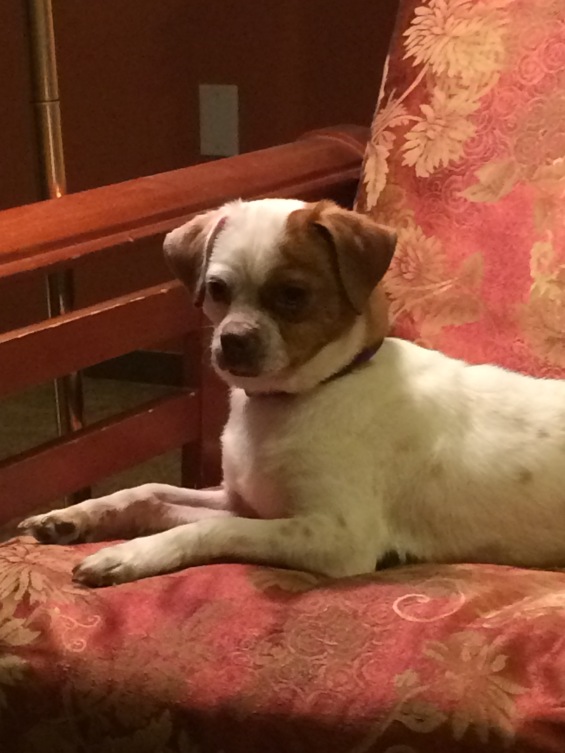 Sometimes he looks truly grateful. This is the look he wears when we snuggle on the couch, or I stoop down to give him a real petting as opposed to a quick pat on the head. It’s a big smile. It’s hard to capture because these smiles are often close up. This one doesn’t do it justice, but I’m tossing it in here, along with the next one in which he’s winking at ya.

He bustles around with his toe nails going clip, clip, clip, like an efficient little supervisor. Sometimes I lose track of him because he’s so quick to follow me, and he’s following so closely. More than once, I’ve worried about stepping on him, but he seems to be used to this possibility and he has lightening reflexes.

For the past week, he has been the most amazing babysitter. He’s kept Pigweed entertained, happy, and even a tad bit disciplined. I can imagine him saying, “Okay now doll, it’s nap time. No more of those shenanigans.” (Not sure, but now I think he’s adopted a gangster accent.)

I googled Chuggy Alabaster thinking it must be a name from a book or movie, but I came up empty. The only Chuggy I found was THE Chuggy, residing right here in my home. I suppose he got his name because it fits. Someone, somewhere, looked at him and thought, Chuggy Alabaster. Clever soul. Whoever it was should be put in charge of naming all the rescue dogs.

I know I said in my last post that I’m not a small dog person. I’m still not, but I am a Chuggy Alabaster person.

If you’d like to meet him, stop by the Petsmart on Route 30 in York tomorrow, Sunday Jan 17, between 11 and 2. Chuggy will be there with a bunch of other wonderful dogs all looking for their forever homes! Here’s more information about this exciting event.