Yang is a solo puppy now, although she’s been trying out the role all week. 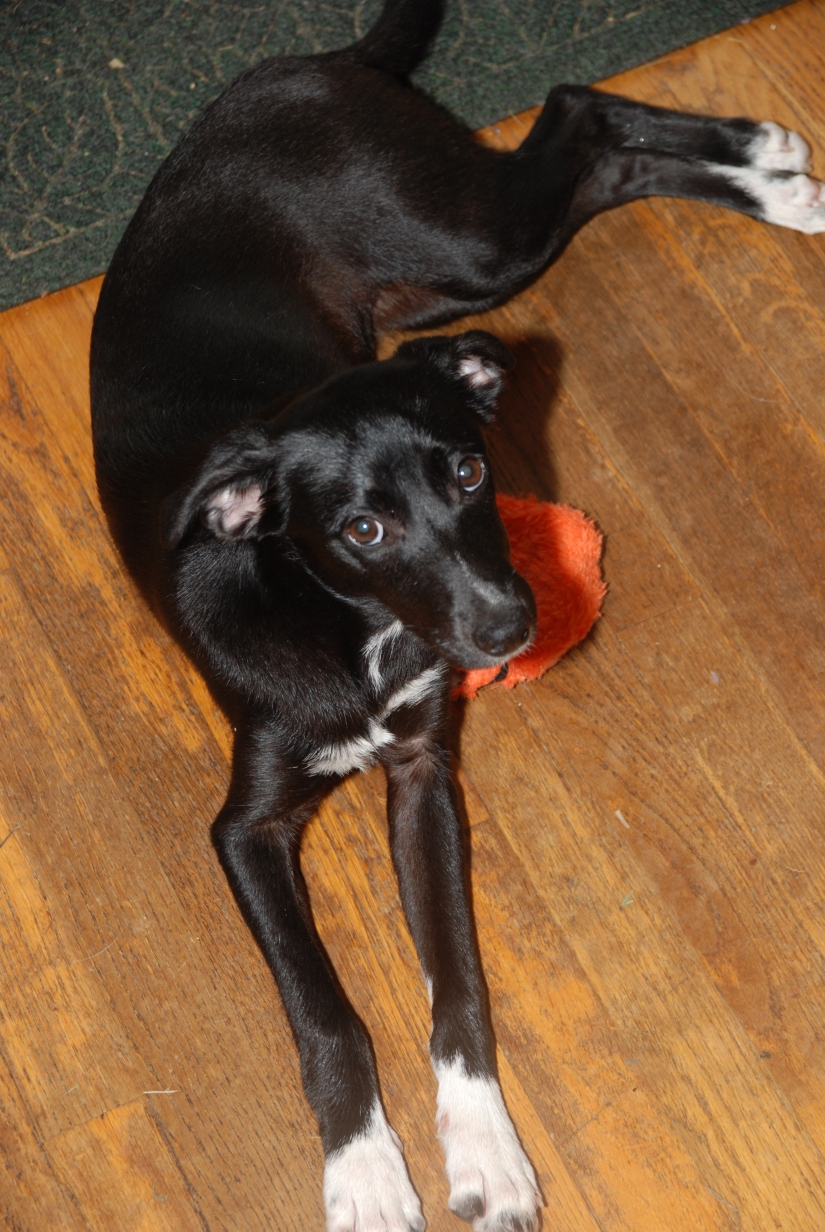 Last Friday, she discovered she could jump the puppy fence in the puppy room. Ever since the night we put them in there and she stood on her hind legs and peered over the top of the fence, everyone has wondered why she hasn’t jumped out. It wouldn’t be a great feat.

I suppose she had no motivation to jump because she didn’t know us or our scary house, she only knew her stubby sister who couldn’t jump the fence, so she was sticking with her.

After Yang jumped the fence and then celebrated by unloading as many shoes as possible from the shoe cubbies across the hall from the puppy room, I installed our tallest fence.

Five minutes later I heard her dragging shoes across the hall again. Urgh. We were supposed to leave early the next morning to meet friends in Virginia for a day/night of wine tasting and friendship. Nick quickly assembled a ‘fence topper’ similar to the one we’d used for the last fence jumper.

That held her for one night, but in the morning she somehow scrambled up and over it just as we were loading the car. Double Urgh.

With no other option, we pulled out one of the big crates and set her up in that for the day.

We also got a medium crate out and set it up in the pen with Yin so she could sleep near her sister. With us gone, though, Ian informed me that she stayed in the pen just fine and didn’t have to utilize the crate.

On Monday we began allowing her in the kitchen. Happy to be with us, she didn’t jump over the kitchen gate which I’m certain is no match for her.

So what happened to Yin, you ask? She found her family!

Yin (now Lucy) took off for her real life on Monday. She is one lucky dog and I’m certain she is enjoying having two little boys all to herself, though I hear the resident cats aren’t thrilled that she’s moved in. Hopefully, one of those cats will explain the hierarchy to that upstart puppy. Her sister is also enamored with cats and spends a portion of her day barking at the kitty in the window.

It’s much easier to deal with Yang’s energy dissipated than it was crammed in a pen or crate. She takes easy laps around the kitchen and greets any/all visitors with leaps and kisses. I have been pleasantly surprised at her near instantaneous housebreaking. She already knows how to let me know she needs to go out and is happily peeing in the yard for treats.

Because baby gates can’t hold her in anymore (at least not when there are people to love on the other side), it’s been necessary to teach Yang how crates work. I’m happy to report that after some half-hearted protests, she seems perfectly content in her crate.

Consequently, this puppy was crate-trained and housebroken in less than 24 hours! No, I’m not a puppy whisperer, she’s just a super smart, super agreeable pup. I’m guessing there is some border collie tucked away in that DNA. Hard to believe she hasn’t been snatched up, but we’re happy to host such a nice guest.

Gala is here…..for now. I don’t want to jinx her, so I’m going to keep mum on her circumstances. In the past when I wrote about possibilities for my dogs they didn’t happen. So forget I said anything, but tune into the Another Good Dog facebook group for updates.

If you’d like to know more about Yang, Gala, or other adoptable rescue dogs (or get involved by fostering, volunteering, or donating), visit OPHRescue.org.

If you’d like to know more about my writing, books, or other blog, visit CaraWrites.com.

6 thoughts on “Yang, the Clever One, Goes Solo”