Assuming anything about your dog is probably a mistake.

(Same goes for most people.)

When Gomer arrived, he was a manic, frenzied force, racing around my kitchen on his noisy toenails, tongue hanging out, pausing only to leap on any persons who happened by.

We took him for a walk with Frankie and he lunged at him over and over, snarling and yipping and frothing at the mouth. And when he was on his own, he attacked the leash itself.

I tried to contain him in the kitchen, and he leaped over the gate to follow me.

Turns out, that was a silly assumption.

Gomer, like so many dogs, was turned into the shelter with a sketchy history. The only thing clear was that he knew trash cans were the best places to find food. He didn’t know about leashes or crates or rules or expectations or manners. And Gomer, like all dogs, wanted to know what was expected of him. He wanted to be a good dog.

And in just two short weeks, that’s exactly what he’s turned out to be. He’s gotten better each day thanks to a structured day that includes time in his crate, behavioral expectations that earn him playtime with Frankie, time with me in my office, and supervised free time in the house. We got for short leash walks around the pasture and explore the woods.

He’s happy and calm. Yes, he can still get his happy going on overdrive, but the manic look in his eye is gone. He walks beautifully on a leash (unless a squirrel happens by – squirrels are his kryptonite). He sits at the door before he goes out and again when he comes in while I take off his leash. He refrains from jumping on most people (although the boys have a hard time enforcing this expectation).

The first time he jumped over a gate, I told him ‘no!’ and put him in his crate for a little time out. He tried it one more time and never again. He’s a quick study.

He knows he must sit nicely before he gets his dinner and he’s learned to hop right in his crate for a treat without hesitation.

I didn’t have time to take him on long walks this past week and I assumed this would make him harder to handle, but in fact, it’s been the reverse—he’s calmer. While the long walks were good for him physically, they maxed him out mentally. He’s anxious away from the house—passing cars, loose dogs, construction equipment, the neighbor’s donkey—these things worried him and sometimes caused him to panic. Eliminating them from his day has produced a calmer pup.

Ian has remarked that when Frankie and I are out, Gomer is very ‘chill’. He likes being the only dog. His manners and his control multiply exponentially. He sits in Ian’s lap, gobbling up the attention, happy as a little clam. In fact, the two have become best buds. Ian made this little video of Gomer yesterday-

At this point, Gomer’s worst fault is that he likes to lick you. All. The. Time. Legs, ankles, arms, faces, hands, whatever he has access to. It’s almost comical, except with Addie—she shrieks and yells at him, much like Lucy from peanuts, she doesn’t appreciate the dog germs.

What Gomer wants more than anything isn’t to run around my house or jump over gates or tackle the other dogs.

What Gomer wants it to make us happy. He wants to please. Seriously.

This dog. He’s like an earnest, fuller brush salesman willing to do anything to get you to buy what he’s selling – his absolute devotion.

So many of my assumptions about Gomer were wrong – I assumed that Gomer needed tons of exercise, time with other dogs, and that he would fight the enforced crate time. I was wrong on all counts. Gomer doesn’t need any more exercise than the next dog. While he likes to play with other dogs, they worry him and ramp up his anxiety. He’s happier and calmer on his own. And that crate? That’s the place where he can truly relax and feel safe. 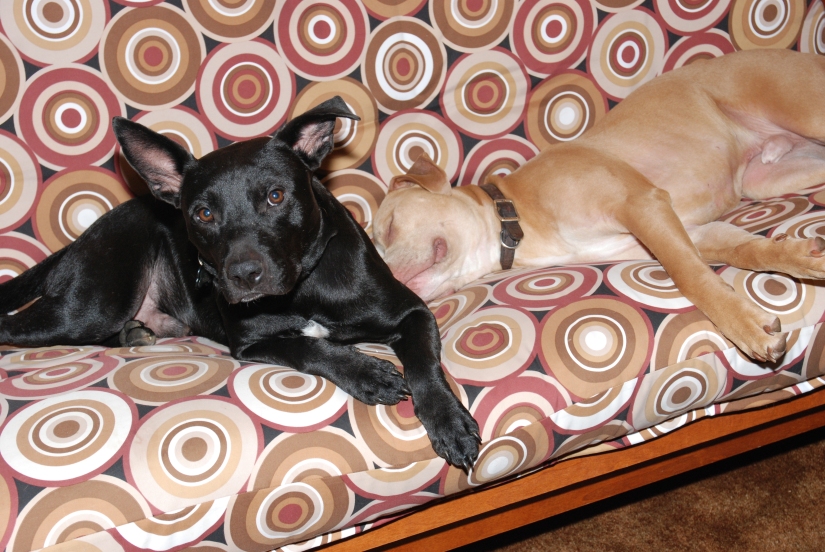 What we have two weeks out, is a completely different dog than the one who arrived here– a pup ready for his forever family.

Gomer’s story is an unlikely one—he turned up at a crowded shelter as a basically feral dog and he was heartworm positive. Not many dogs with his history would have had a chance of getting out a shelter alive. But OPH believed in him. He’s been treated for heartworm and is well on his way to being an awesome family dog for some lucky family. And you know what? I think Gomer knows that. I think that’s why he’s so eager to please. I think that’s why he can’t stop kissing everyone. 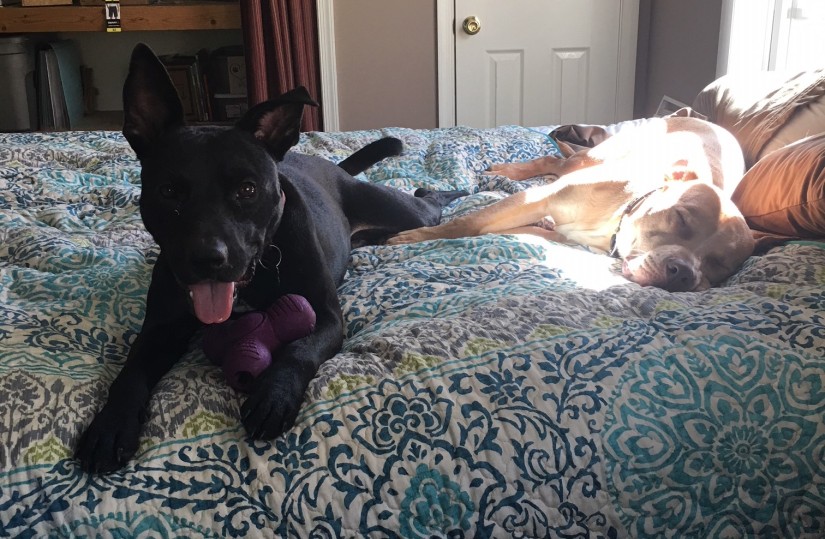 And my other assumption – that Frankie was destined to fail his Canine Good Citizen Test? Well, after five weeks of preparation, leaping in the faces of dozens of ‘friendly strangers,’ endless loops of Home Depot where he dragged me towards passing children and away from passing forklifts, countless ‘high value treats’ fed to reinforce his sit-stay and hours on the leash working on not pulling me along like a toe rope, I still drove towards the test on Saturday already talking myself into accepting that he wouldn’t pass on the first shot. And that would be okay. He’s still my wubba bubba, I reminded myself. 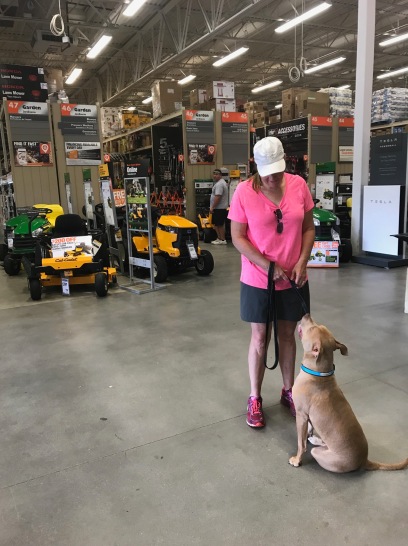 Now Frankie is officially a Canine Good Citizen! The CGC certification is from the American Kennel Club. I’ve been asked why it matters, and other than enabling him to compete in AKC events, it wouldn’t matter, except that Frankie is an American Staffordshire Terrier.

As a ‘bully breed,’ his CGC is a big deal. It certifies that he’s not a dangerous dog and it will open doors for him – to train as a therapy dog, to take agility classes, to visit dog parks with bully breed restrictions, and if I lived in a county that had BSLs (Breed Specific Laws), having a CGC could mean the difference between being able to rent certain homes or get homeowner’s insurance or not. When Michael Vick’s dogs were rescued, none were allowed to be adopted out until they passed their CGC. While a CGC is good for any dog, it just matters a little bit more when you’re a pitbull.

And those puppies? They are sweethearts! With their happy attitudes, long noses and lanky, endless legs, I’m going with some kind of collie in their genealogy. It’s been fun to play with them in the puppy yard – Frankie has especially enjoyed them.

Sherry and Brinkley are very people oriented – choosing people over toys, treats, and other dogs. I’m surprised they haven’t got a line of adopters vying for them, but maybe it’s the time of year. The girls (as I call them) are easy to have around—they aren’t noisy (other than a few whines, I haven’t heard a sound out of them). They are neat, as puppies go, are enthusiastic eaters, and love everyone—even Gracie who continues to growl at them. 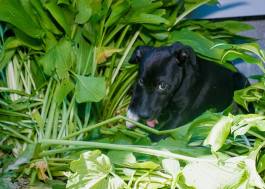 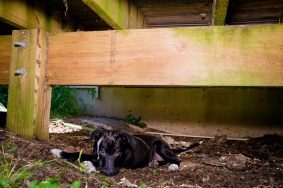 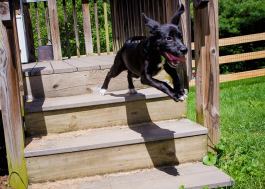 The ’80’s Ladies’ are excellent little guests, but I’m hoping they find their forever homes soon. No doubt they are CGCs in the making.

And as for Gomer, my money says he would be an ace in any doggie class.

If you’d like to know more about my blogs and books, visit CaraWrites.com or subscribe to my monthly e-newsletter.

If you’d like to know how you can volunteer, foster, adopt or donate with OPH, click here. And if you’d like more regular updates of foster dogs past and present and extra puppy pictures, be sure to join the Another Good Dog facebook group.

COMING AUGUST 2018 from Pegasus Books and available for preorder now: 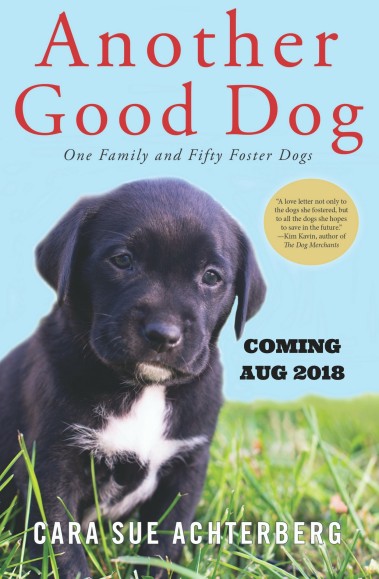 7 thoughts on “Testing My Assumptions About My Canine Good Citizens”