It’s official – we definitely have a toddler in the house. How can I tell? How about this?

Or the fact that every trash can now resides upon a large piece of furniture, out of reach.

More evidence is that my husband and I regularly discuss poop and pee. I thought we’d finished having those conversations about nine years ago. Very proud to say our smart little girl is picking up on the we-pee-outside-not-inside rule very quickly. And she has yet to poop in the house – oh my, potty talk. And on my blog! 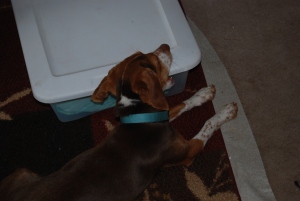 Galina is a little delight, bringing sunshine to this bitter, cold week. Aside from the pencils, cardboard, toilet paper, dice, an errant Christmas ornament, and yet another wine cork, she hasn’t chewed up anything important yet. She’s been working on an under the bed box, but I’m not sure she’ll win that battle.

When we received Galina, we were told she was one year old. I’m gonna guess that might be more on the higher end of the possibilities. That’s the thing about a rescue dog – they are mysteries. Because so few come with a previous owner and because they can’t speak for themselves, much is guess work.

My little pocket beagle has given us a few clues about her babyhood.

She craves our touch, but always shrinks from it at first. Not every touch in her life has been a good one.

She gobbles her food, worried someone else might take it. Maybe it hasn’t always been available in such abundance or maybe she’s had to compete for her share. I’m fairly certain I know exactly what time they feed the dogs in the South Carolina shelter where she came from because she will jump up from a dead sleep and begin following me around with an expectant air, pausing occasionally to lick the floor and search for crumbs that may have fallen off the counter.

She is frightened of big movements, loud noises, and horses, but she’s so curious she can hardly contain herself, running from one new experience to another.

And tonight we discovered (and maybe Galina discovered!) that she is a bird dog!

I was walking her, waiting for her to focus and take care of business, when there was a commotion in the driveway. My husband had begun hauling hay. Because of the snow and ice, the hay truck couldn’t get up the hill to our barn this afternoon, so we’d had to have the hay delivered to the driveway instead. Nick had begun the task of loading bales into our SUV and hauling them up to the barn. Galina was very much interested in this activity, so I took her up the hill to help.

Inside the barn it was a challenge to keep Galina from tripping Nick as he carried the bales in from the car. I then stacked the bales while still holding the leash, a trick I had no idea I was capable of performing. While we were working, the chickens gathered in the barn to see if there were treats to be had.

There’s no other way to say this – Galina flipped out. “Oh joy! Oh sheer happiness! What are these delightful creatures?” she yapped in a high pitched bark we hadn’t heard her use before. A voice that clearly said – “I have found my people and they are chickens!!”

She threw herself in to the task of reaching the chickens. By sheer energy and single-minded determination she herded them in to a corner, even while restricted by the leash from actually touching them. I believe she was interested in more than just playing with them, although I can’t speak for her.

It was quite the effort to drag her away when we’d finished our chore. She came with me, but couldn’t avert her gaze from the barn full of feathered bliss. She had assumed a certain swagger and seemed larger than her previous self.

Every day we’re learning more about our precocious little mystery pup. Who knows what tomorrow might bring!