“They are so much smaller than they look in the pictures!”

This is pretty much what everyone says when meeting the puppies for the first time.

To me, they’re giant poop-filled monsters compared to the little moles they were when they arrived five weeks ago. At that point most of them weighed less than a pound, with tiny George weighing just 10 ounces and Beatrix weighing the most at 1 pound 1 oz. Hemingway is now the biggest puppy. At nearly nine pounds, he’s four pounds bigger than George. According to the lab growth charts he could top out at 82 pounds! That’s a big dog. Whoopi-size.

So, to give you some scale, I took a few pictures of the puppies with random items. I used Virginia in the first two pictures because she is one of the average size puppies. In the third picture (you’ll note my attempt at free advertising in this one), I used Beatrix because in my absence there had been a rumble and she had the least amount of poop on her. Beatrix is one of the largest puppies, generally trading off second place with Zora.

On the warmer days, I’ve been taking the pups outside for an hour or two. Setting up the pen (two or three puppy pens linked together) and then carrying them out/in is a serious investment in time I don’t have, but we make the most of it. I try to time the outdoor play with at least one meal, saving me work on the back end (so to speak).

Luckily, I’m getting a fair amount of help with the puppies. (Not so much with the cleaning up, although Nick dealt with them when I went away overnight on Sunday and Ian lucked into two dinner meal/clean ups this week.) I can generally find someone to help me haul them in and out of the house, and we’ve had a steady stream of visitors who come to play (but we would welcome more!). Maybe playing with the puppies doesn’t seem like work, but it wears them out and is much better than listening to them whine or picking up after bored puppies who have shredded a towel/puppy pad/newspaper/toy/random-object-left-too-near-the-pen.

Edith and the pups have also received some much-needed supplies from a few generous angels. Sarah, another OPH volunteer, sent over a case of Edith’s favorite canned food, plus a bag of kibble. And an anonymous angel has been sending surprises via UPS. The first was a box with two large bottles of bleach and the second was a case of paper towels. At first I thought maybe this was a commentary on the condition of my house, but then I connected the dots and realized bleach and paper towels were meant for puppy clean up. Last week two boxes of extra-large puppy pads arrived. Big thank you to you whoever you are!

And then there are the dozen or so angels who have donated to Edith’s Heart, the fundraiser I started to help cover the cost of Edith’s heartworm treatment and raise funds to save more dogs like Edith. We’ll run this fundraiser until Edith’s treatment is complete, which should be around Christmas time. She has a long way to go and is far from out of the woods, but is doing well and has almost weaned the pups which is the greenlight for us to focus on getting her well.

Edith has one more angel—the most important one for her. Nancy is her adopter who will give her a forever home. Nancy is also a seriously talented photographer. She took the beautiful puppy portraits in my recent post. Now she has turned those portraits into a calendar. 12 pups for 12 months! She printed twenty copies and donated these beautiful calendars to OPH to raise funds for Edith’s Heart. If you’d like your own copy, stop by the Shrewsbury Pet Valu event THIS SUNDAY 12-3, or send me an email cara.achterberg@rocketmail.com. The calendars are $20, plus shipping (if necessary). And remember- you can always pick yours up and play with puppies!

Fostering Edith and her twelve darlings is a daily adventure, but one I’m grateful for as I’ve been privileged to experience again and again the generosity and support of a community of people committed to rescuing every dog we can.

Here are a few more pictures and one video to enjoy. Don’t pay attention to collar colors in the pictures because the pups have recently discovered that if they chew on their sibling’s neck long enough, they can remove the colorful velcro toy which is so good for tug-of-war. Luckily, it’s getting easier to know who is who, although at this point all I see are poop-machines. 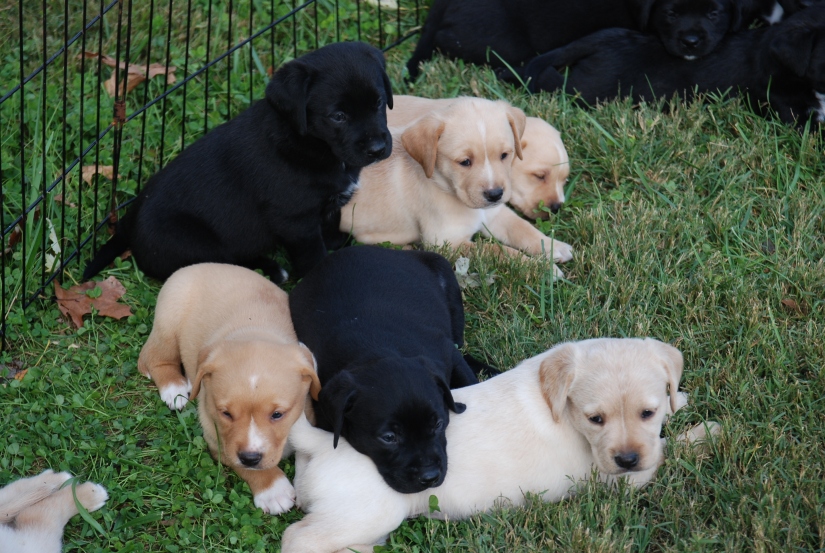 If you’d like a near-daily dose of puppy pictures, plus news of past fosters, be sure to join the Another Good Dog facebook group. If you’d like to donate directly to Edith’s Heart, click here.