The first week Gala was with us, I wrote about how she was prone to adventures. Excited to be here and curious about the really large dogs in our pasture, she found many ways to escape our house.

Each time we managed to catch her just in time and then reprogram everyone to lock that door, not let her on the deck, etc. On one of her early escapades, she raced for the barn area and chased the horses around the field, ignoring our pleas to come, only leaving them when she caught a hoof to her side from my elderly mare. I breathed a sigh of relief, hoped she’d learned her lesson and got much better at keeping Gala contained. I wrote: “If she had gone after one of the other horses, I’d be writing a much different post today.”

Well, three months later, here’s that much different post. She escaped again, and no, she didn’t learn a lesson that first time.

This time she chased after my alpha mare, again ignoring our pleas. She trapped Cocoa in the run-in shed and when she lunged at her, Cocoa kicked Gala in the head. I’m still sick at the sound or actually the lack of sound. That was the moment her happy barking and Cocoa’s panicked pounding hoofs fell silent. Gala slunk out of the shed and went right to Ian who was standing on the other side of the fence, white with shock.

Gala’s jaw is broken, but more than that, her spirit is. My vet examined her and took xrays and taped her jaw together. He pumped her with antibiotics and pain meds and we spent the weekend trying to keep her quiet and still and medicated while we wait for OPH to find a surgeon to look at the xrays and make an expensive decision.

Watching her lie sadly on the Frank bed, uncharacteristically still and silent, Nick said, “Every time a dog gets loose and you panic and say, ‘We have to catch her before she gets her head kicked in,’ I thought you were exaggerating. I didn’t really think it would happen.”

In the two and half years that we’ve been fostering, this has always been one of my greatest fears. Horses kick dogs. At least the ones who chase horses. And when faced with snarling teeth, a horse will run. If those teeth close in, a horse will kick. I’ve watched my horses throw warning kicks at neighbor dogs, occasionally making contact. Most dogs learn quickly to stay away.

Before she trapped Cocoa in the run-in shed, Cocoa had already run her over twice. Each time, I thought, “Okay, now she knows.”

But no, Gala is a determined and confident girl. Her heart is much bigger than her head.

I’ve spent the last few days wishing I’d just done one thing differently. The door that Gala finally managed to escape through has held her for over three months. This time, her enthusiasm and intense energy managed to hit the latch and the lock at just the right angle to release it.

If only I’d crated her while the kids were outside.

If only it hadn’t been so hot, then Cocoa wouldn’t have been in the paddock.

If only I’d gotten up there faster.

If only she’d gone after the chickens instead.

If only I’d thought to open the big gate to the pasture, maybe Gala wouldn’t have been able to trap Cocoa.

If only she’d come when we called.

I could make myself nuts reciting them, searching for a logical explanation, some kind of excuse, some reason why this was unavoidable. I desperately want to rewind the tape and get a different outcome. One that doesn’t leave this sweet dog in such agony.

We’ve watched her confidence leak out these last few days until she is only a shadow of her former self. She walks slowly around the house, occasionally standing frozen for minutes at a time. I don’t know if the pain is overwhelming her or if she’s lost in thought or if the kick to her head also shook up her brain and maybe she’s forgotten where she was going. My poor girl.

The first morning after, she followed me everywhere, a sad brown soul slinking along behind me, bumping me with the plastic cone she wears to keep her from removing the tape-muzzle that’s supporting her jaw. When I needed to attend to Dug, I closed Gala in the kitchen with the baby gate. Healthy Gala would leap over that gate in half a breath, but hurt Gala pawed at it pathetically.

Later, though as I cleaned up the puppy room, I heard a commotion and then Gala appeared. While I was worried about her jaw, I was also heartened to know that she was still in there. Spunky Gala wasn’t completely gone.

I’m guessing it’s this spunky Gala who will make recovering from jaw surgery easier and harder. She won’t give up, she will eat and exercise and hopefully heal quicker than the average dog, but keeping this girl quiet and still while the healing happens will not be easy.

We are feeding Gala watery gruel and she slurps it slowly. Already I can see her losing weight. The morning before her escape I remember watching her on our morning run and thinking how gorgeous she looked – healthy and strong and beautiful. The shaved spots from her heartworm treatment have almost dissappeared. She looked so different from the dog who arrived here three months ago. 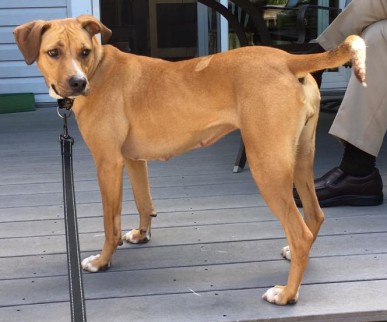 My heart feels bruised like Gala’s head. Nick and I are re-considering how we keep doing this. I don’t want to see another dog go through what Gala’s going through. And how can I know it won’t happen again? Even with Gala?

She needs us and is clingy, staying close, only eating when I stand beside her. Even though I’m certain it hurts, she whines and tries to bark when I go out to the barn or gardens and leave her inside. As much as I want to be the one to help this dog heal and find her forever home, I know that it’s not safe for her here anymore. She will need to go somewhere else. Which is cause for more tears. I’m worn out worrying over this dog.

He is thriving – happy and growing and sweet and fun. He makes me smile. He is an easy puppy and gets healthier every day. He’s nearly housebroken and is content to spend time in his puppy pen chewing squeaky toys or to chase me around the yard. Dug is the perfect antidote for my sadness over Gala.

I’ll try to post later in the week after we have a plan for Gala’s recovery. Once we have an idea of the cost for her treatment, I’m going to put together a fundraising page to help OPH pay for her expenses.

If you’d like more regular updates on Gala, Dug, and other fosters past, please join the Another Good Dog facebook group.

If you’d like to know more about my writing (including informaton about my latest novel, Practicing Normal, which came out only 2 weeks ago!), visit my websiste, CaraWrites.com.

For information on adopting, volunteering, fostering, or donating to help Gala, Dug, and lots of other deserving dogs, visit OPHRescue.org.