I’m out of breath just thinking about them. My two new pups, Yin and Yang, bring a whole new meaning to the words ‘whirling dervish’.

They are billed as lab-mix puppies, but I’m gonna walk that back a bit and say lab-mix is overshooting it. I’m not any kind of expert, but my personal experience with lab puppies is that they are playful and fun – but not manic and bouncy. I’ve yet to be able to get a decent picture of these pups thanks to the constant motion. Even when I try to sneak up on them (I know they can be still because I see them on my puppy cam), they sense my presence and become airborne before I even reach the doorway.

I have discovered two ways to still them (neither of which leaves a free hand for a camera). The first is to catch one mid leap and snuggle her in your arms. These girls LOVE people and will allow you to hold them for a few moments before their exuberance gets the best of them and they squirm to find the best angle to bath your face with their tongues.

The other way to still them (momentarily) is to reach in the pen for them, which causes them to collapse to the floor in ecstasy or fear (not quite sure which) and then furiously rub their bellies. They are belly-rubbing fools. It never lasts long, but it’s worth the effort. 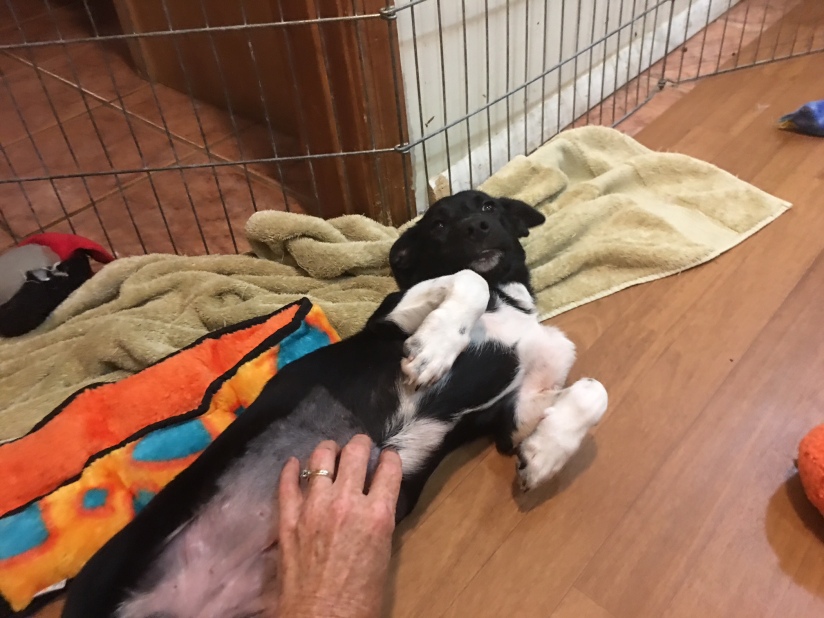 Today I’ve enlisted the help of a professional photographer to come capture some individual shots of each pup. We’re also going to get them outside and set all this energy free to run in the pen. They’ve used up every inch of their indoor space – tearing in circles and eventually forcing all bedding, toys, puppy pads, and bowls to the outer edges of the pen as if a tornado has touched down, which perhaps it has (two small black and white tornados).

Naming them Yin and Yang may have been a jinx of some sort – infusing the opposite of calm and balance. They are quite different and complimentary, though. You just can’t quite see they are different in the blurry pictures.

Yin is smaller, but stockier, built a little like a corgi. Yang is tall and lean, more like a Vizla. Yang also has a near constant smile, which if you’re not accustomed to a smiling dog,  I’ll warn you it can look a little like barred teeth. They both have narrow faces and pointy noses (very UN-lab-like), sleek black coats with longish hair, splashy white markings on their chests and tummies and a whisper of white on the tips of their tails. Yin has long white socks, too.

They arrived already microchipped, but the only identifying picture I have is one of both of them. I wondered how I would know which pup got which chip, but then I saw the names they were given at the shelter – Smiley and Boots.

They are both sweet, submissive dogs who LOVE people and seem very enthusiastic about the other dogs in our house. They love to play and chase after balls and squeak squeaky toys. Yang is already playing fetch. I imagine they would both be excellent family dogs – uncomplicated and happy and always, always, always ready to play.

Gala is still very much here (she’s not a dog you can ignore for a moment). Thanks to one of my OPH sistas, Juanita, we’ve been trying out an e-collar. She didn’t notice the sound or light settings, so we’ve been using the vibrate function, in the hopes that we can avoid the shock setting. When I activate the vibration, she immediately comes back to my side. It’s been helpful with pulling and has curbed her pouncing-on-the-cat habit. I’m a little slow on the draw, so the training is occasionally spotty, but I’m trying. Luckily, she’s pretty darn smart.

Gala had another adventure today, as I was writing this post, in fact. She was hanging in my office, which resembles a war zone. In some kind of lucky-streak-curse-avoiding weird decision, I’m not vacuuming up the mess until she leaves (or a houseguest arrives), so there are a gazillion tiny white pellets from and exploded Beanie baby, shreds of my old leather sandals (initially ruined by previous foster dogs), several old sneakers pulled to pieces, and countless ravaged dog toys littering the floor, alongside the one kong toy she can’t destroy but squeaks for hours on end (the purple plus sign). 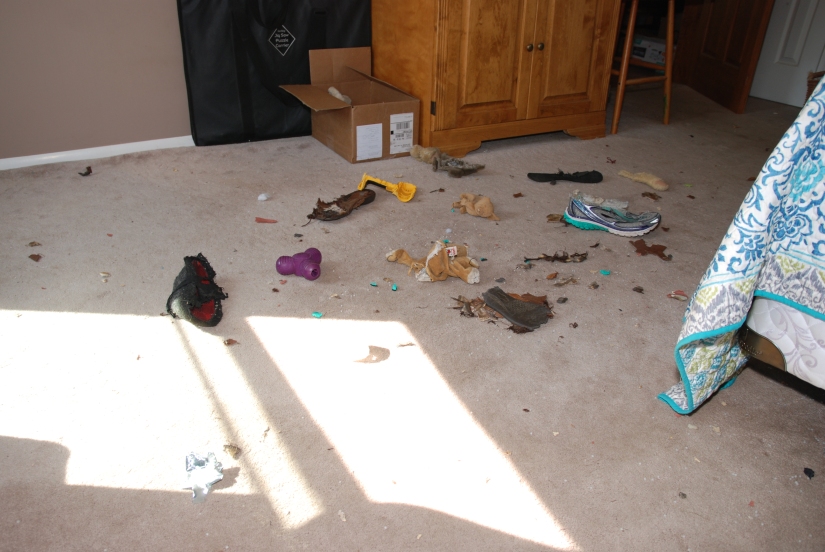 Nothing particularly exciting was happening outside, but Gala spent a long time staring out the office window. And then very quietly, with no fanfare, she simply pushed the screen out and took off out the window.

Lucky for me Nick, Brady, and Addie were home. Nick ran for the paddock to keep her away from the horses. Two were in stalls, but one was shut in the paddock. Brady followed Gala into the pasture, wandering aimlessly towards her but not chasing, I called and pressed the vibrate button on her collar, but she could have cared less. She galloped all over the pasture, occasionally challenging Nick for access to the horses.

Finally, she stopped to sample a little horse poop (dogs LOVE horse poop). Addie and Brady walked slowly towards her from different directions. I could see her glance at them, but she continued her snack. Brady got to her first, calmly saying things like, “That looks tasty, Gala. Yummy horse poop. You enjoying that?” Gala, feeling no threat (since Brady never walks her or disciplines her, just receives her kisses and when she jumps on him, he takes her paws and dances with her) continued to nosh. Brady grabbed the leash and just like that – crisis averted! I have such awesome kids.

She’s shut in her crate now since not only did she pig out on horse poop, she also rolled in it. A bath is in her very near future. Maybe it’s time to vacuum the office. Maybe leaving the mess is having the reverse affect. Maybe if I finally clean it up, Gala’s people will come for her. I’m also thinking seriously of removing the rubber covers on the prongs of her e-collar so next time I have a better chance of getting her attention.

Never a dull moment. Ever.

The thing about Gala, though, is she wants to be good. She wants nothing more than to please me, but it’s not easy being Gala, what with the intensity and smarts and endless energy and the challenge of controlling impulses (she’s a little like a few kids I used to know).

She’s learning, though. Sometimes when she’s overly excited and jumping around, she’ll mouth my arm like a puppy. I’ll growl, just a little, to warn her and she’ll immediately go find a toy and chomp on it for all it’s worth. She just has to chew, but she’s learning to make a better choice.

Same with our walks, she’ll make the motion of bounding away, but stop herself before she hits the end of the leash and glance back at me before walking sanely as if she’s saying, “See, Mom? I was gonna run, but I remembered!”

Moments like these make me certain that all she needs is the right person. Someone who is committed to working with her and can see the diamond in the rough, here.

Because certainly Gala is a gem.

If you’d like to adopt Yin, Yang, Gala, or another deserving rescue dog, visit OPH Rescue. You can also find information there on fostering, volunteering, and donating to help save more dogs.

If you’d like to see the pictures Nancy of WAGS Pet Portraits took of Yin and Yang today, watch for them on the Another Good Dog facebook group.