Christmas week was joyous and dog-filled at our house. Frankie reveled in the presence of family and the presents under the tree. My mom gave me a sign that says it all –

My happiest news for you is that Daisy Duke was adopted!

Before she left, though, Nick and I took her along on his birthday trip to the Shenandoah Mountains. She was a great traveler, but just about the time I said, “I don’t know why her previous adopter said she was an escape artist….” she threw in a few parting shots.

For the past three weeks she had been Velcro-ed to my side at all times and never gotten out of crate, gate, door, or window. Honestly, I had even forgotten to worry about it.

There was a fair amount of driving involved in our adventure between getting there, climbing mountains, visiting breweries and wineries, and looking at properties.

For the first day, Daisy was excellent company for Frankie. They were both buckled into the back seat and content to look out the window when the car was in motion or chew the cheese-filled gigantic bones we had for them when parked (and not invited to come along).

The little house we rented was nestled in a valley between mountains where the sun didn’t come up until 8:30am and went down before 4pm (very conducive to napping I must say). 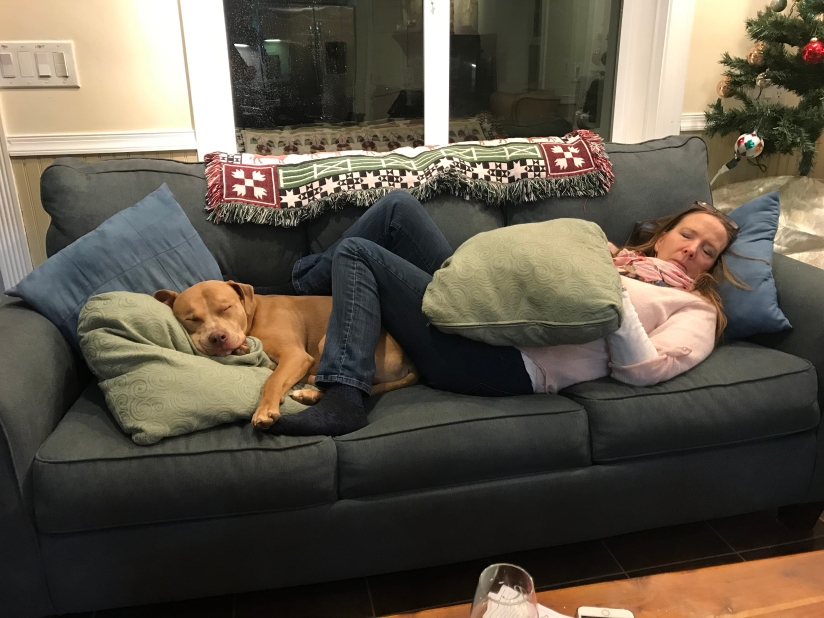 It had a large fenced yard surrounded by a pasture filled with goats (!). Frankie enjoyed ‘herding’ the goats whenever they ventured near the fence. Daisy was unimpressed with the goats.

The fence was pretty secure for larger dogs (or dogs with larger heads, like Frankie), but Daisy-sized dogs had many options for sneaking out between gates or under fenceboards. Each time she ventured near an exit, a quick ‘Nnnnnnttttt!” from me stopped her in her tracks and she happily moved on to other explorations.

That night Daisy slept quietly in her crate and the next morning the dogs had a few romps in the yard while I listened to the quiet. (Truly, it was so quiet I could hear the creek burble on the other side of the valley nearly a half mile away.)

In the morning, we drove to the nearby national forest and hiked three miles up a mountainside. 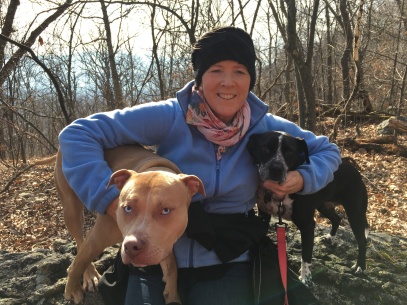 Daisy was awesome and Frankie served as an excellent tow-rope. On our way back down we encountered an older man hiking with three tiny Yorkies. He alternately carried one of them at a time and the others were loose. Frankie was ready for a good-natured rumble, but Daisy snarled and snapped at them—a first, as I’d never seen her react that way towards another dog. Maybe she thought they were woodland varmits?

After our six mile workout, I figured the dogs would be exhausted and sleep in the car while we went inside a brewery for lunch. The car was parked just outside the brewery door and Nick and I both went back out to check on them during our lunch. I went out about twenty minutes before we left and saw Frankie on the seat sleeping and Daisy on the floor in the back, chomping a bone. We’d tethered them out of reach of each other just in case an impromptu wrestling match started up (I didn’t want someone to inadvertently hang the other!).

When we finished our lunch and returned to the car, Daisy was sitting in the driver’s seat waiting for us, as if to say, “C’mon kids! Hop in—let’s get this show on the road!”

She had chewed completely through the nylon seatbelt that had secured her and helped herself to the rest of the treats I’d packed but seemed no worse for wear. 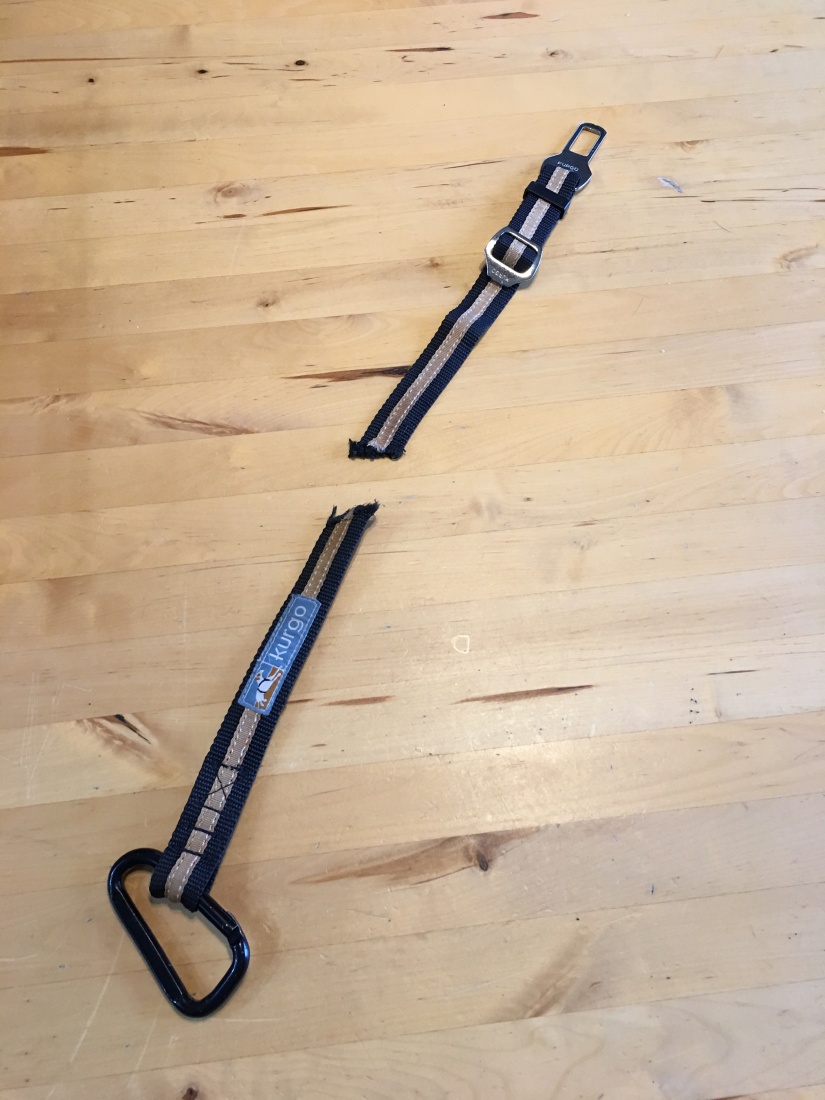 After that, minus a seatbelt, she roamed the car freely and caused no trouble.

But later, back at the house, she slipped out of the fence at the first opportunity, perhaps having gotten a taste of freedom and wanting more. Luckily, she didn’t go anywhere and came right to me when I called.

The day after we got home, she was adopted by a delightful couple who have a large fenced yard and warm and friendly spirit, plus a few grandchildren for Daisy to entertain. It’s a great home and lovely family. One Daisy truly deserves.

On Christmas Day, Flannery O’Connor returned. It was a first for us. 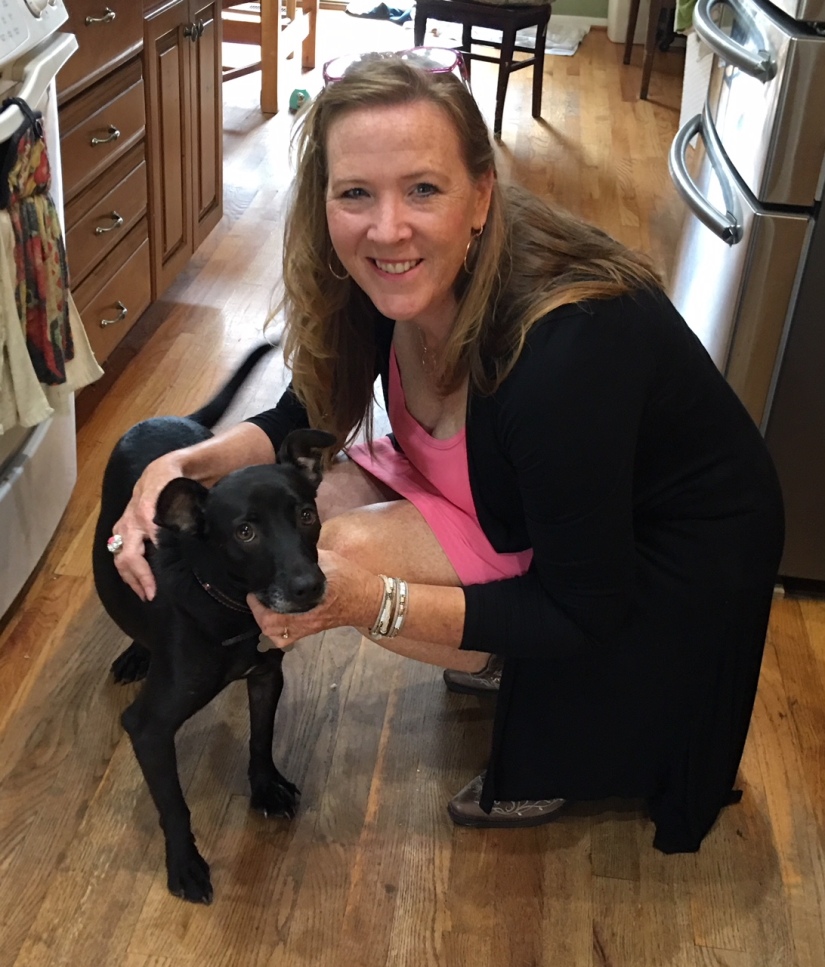 Other than Frank and a puppy who both came back within their one-week trial period, and Meredith who went from one adopter to another, Flannery was our first real returned dog. I’d say 1 for 134 is a decent record.

She is currently finishing up a ‘shut down’ period in which we’ve kept her world very small – mostly in the crate or on walks and limited interaction with new people or dogs. She was frantic and overly defensive at first, but in the last few days she has settled into her old busy-Flannery personality.

If you recall, she was always an industrious pup happy to entertain herself if no other form presented itself. 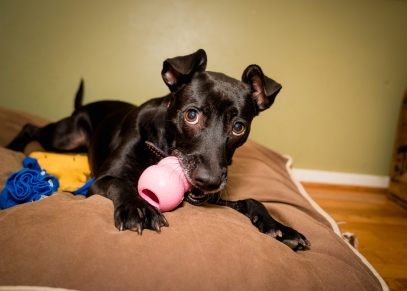 I’m sure she’ll be here amusing us for a while as she returned with a few new challenges that need to be addressed.

And then there are the puppies! 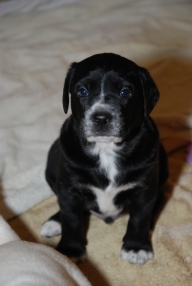 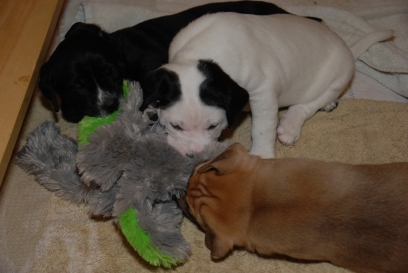 They are getting bigger, but still quite the butterballs. I’m not sure if it’s the fact that the milk fountains are so plentiful, but they are not the least bit interested in solid food as they should be since they’re approaching 4 ½ weeks. I’ve begun keeping Hula Hoop away from them for most of the day in the hopes that they’ll finally get hungry enough to give the puppy mush a try.

Weaning these puppies needs to be a priority since Hula Hoop is still deathly skinny, and desperately hungry thanks to the tapeworms she is battling.

This week the puppies will be shared with the PWL (Puppy Waiting List) and in another week, they’ll be listed on the website for adoption. If you’re in the market for a puppy, getting on the PWL is a good idea since they get first dibs on all the puppies in OPH’s nursery. I don’t expect these cuties to last long, but if you’ve had your eye on one, don’t fear because we have several litters about to appear on the website.

I don’t know about you, but I’m ready to put down the cookies and get back to my routines. I’m excited about what 2019 will bring. May it be filled with joy and lasting peace, and plenty of forever homes for deserving dogs.

If you’d like to know more about my blogs and books, visit CaraWrites.com or subscribe to my monthly e-newsletter (which is rarely monthly, but I’m working at it…everybody needs a goal).

If you’d like to know more about the book, Another Good Dog: One Family and Fifty Foster Dogs, check AnotherGoodDog.org, where you can find more pictures of the dogs from the book (and some of their happily-ever-after stories), information on fostering, the schedule of signings, and what you can do right now to help shelter animals! You can also purchase a signed copy or several other items whose profits benefit shelter dogs!

If you’d like to know how you can volunteer, foster, adopt or donate with OPH, click here. And if you’d like more pictures and videos of my foster dogs past and present, be sure to join the Another Good Dog facebook group.

4 thoughts on “Have Dogs, Will Travel”