My heart is so broken.

I don’t remember a hurt like this—it’s everywhere, in every thought, every breath.  My eyes are slits and my nose is raw and sore and the tears just keep coming and coming til it doesn’t seem possible I have more, and then I do.

I’m making myself move—fold the laundry, clean the counter, weigh the puppies and worm them, walk Thelma, pull a few weeds, put shoes in their cubbies, anything so that I don’t just sit and sob, which is all I’ve been doing for days. I can’t eat and I’ve had so much tea, I have the shakes. I can’t talk because it comes out a squeak and if anyone says anything nice to me I fall apart. If you’ve called or messaged me and I haven’t answered, I apologize.

I’ve canceled every puppy visit, moved the party we were supposed to host. I am hunkered down, doing only the things I can, which is nothing that requires my heart or my brain because my heart is in a million pieces and my brain is doing all it can to keep me upright.

I have had to make the most impossible decision. Maybe the most painful of my life. And, while some of you will argue with me, there truly wasn’t a choice.

On Thursday, Frankie attacked my daughter. She was entering our house and he went after her, chasing her outside and biting her twice before I could reach them. I drove her to Urgent Care and thanked God that it was not worse. That I was there. That I could stop him. I won’t allow myself to think what would have happened if I wasn’t there.

This dog of my heart hurt my daughter. This sweet dog that I spoon with sunk his teeth into my baby girl. This precious boy who snuggles with Flannery, this ace agility student, this best friend at the dog park, he attacked my child.

Addie will be okay. The wounds are deep punctures that hurt immensely but will heal. She is one tough cookie, incredibly cool in stressful situations, and probably way too forgiving. I don’t want her to forgive because it isn’t forgivable.

We went home from Urgent Care with bandages and a prescription for antibiotics and Addie postponed her move to New York City by a week so that we can care for her here as she heals.

Nick was in France on Thursday when this happened, but because I couldn’t speak, he talked to our vet, who said he would euthanize our dog if that’s what we wanted but suggested we talk to an animal behaviorist. The next morning I spoke with this kind, compassionate, knowledgeable woman. She asked me questions, I tried to explain. She wanted facts. And then she carefully, gently but clearly told me what I already knew.

Frankie is a dangerous dog. This is the third ‘attack’. The other two incidences haunt me now but were easy to justify at the time, as they were ‘strangers’ entering our home without me present. We were lucky that the people escaped without the serious injuries that Addie sustained. The behaviorist told me that the next time would likely be worse.

She asked about Frankie’s upbringing, our training practices. I told her that Frankie had been to manners classes, had passed his Canine Good Citizenship test, that he was in agility training now. I told her how good he is with foster dogs, how gentle with puppies, how much he loves other dogs. How friendly he is when we are out, how much he loves Ian and Nick and me.

The behaviorist, said many dogs are anxious, full of anxiety, just like so many humans. Frankie reacted out of fear. I think he loves people, but the behaviorist said she could prove to me that he doesn’t love people, only fears them; she could do that in only a few minutes if I wanted her to. I didn’t.

I asked her if he could be fixed. She said he couldn’t, we could learn to manage him to the best of our abilities, but he could never be trusted. Never. She could help me to train him to back away and lie down when people come to the door, but if he were her dog, she would never allow him to come near the door.

My home is a welcoming place. Intentionally so. I have worked to make it a place where people enjoy coming, where my kids’ friends always have a place at our table, where friends or neighbors can stop by for any reason. Our door is always open. That’s the kind of home I want and I have.

And so Nick and I cried on the phone as we came to a painful decision, the only option. The same one that is preventing me from eating or sleeping or speaking to anyone.

I would not rehome Frankie and take the chance that he would very likely hurt someone again.

I would not pay five to ten thousand dollars to place him in a sanctuary where he would basically be living in a boarding kennel the rest of his life. It would be only a half-life and I would rather use that money to save more dogs.

The only answer was to peacefully let him go.

And I could only do that knowing that we have given him a wonderful, happy, loving life. Yes, it was a short one. So much shorter than I can bear, but it has been a good one.

Nick would not return until Saturday night and I knew I couldn’t do this without him having the opportunity to say goodbye and to be by my side when I did. Ian sat with me on my bed late Friday night and we cried as Frankie rolled around looking for belly rubs and giving out kisses. We love this dog. With all our hearts. And he has had a wonderful life.

The least we could do was give him a compassionate, painless ending. So I spent his last day spoiling him rotten. On Saturday morning, we met his best pal Edith at the dog park to play. Nancy took a few pictures. 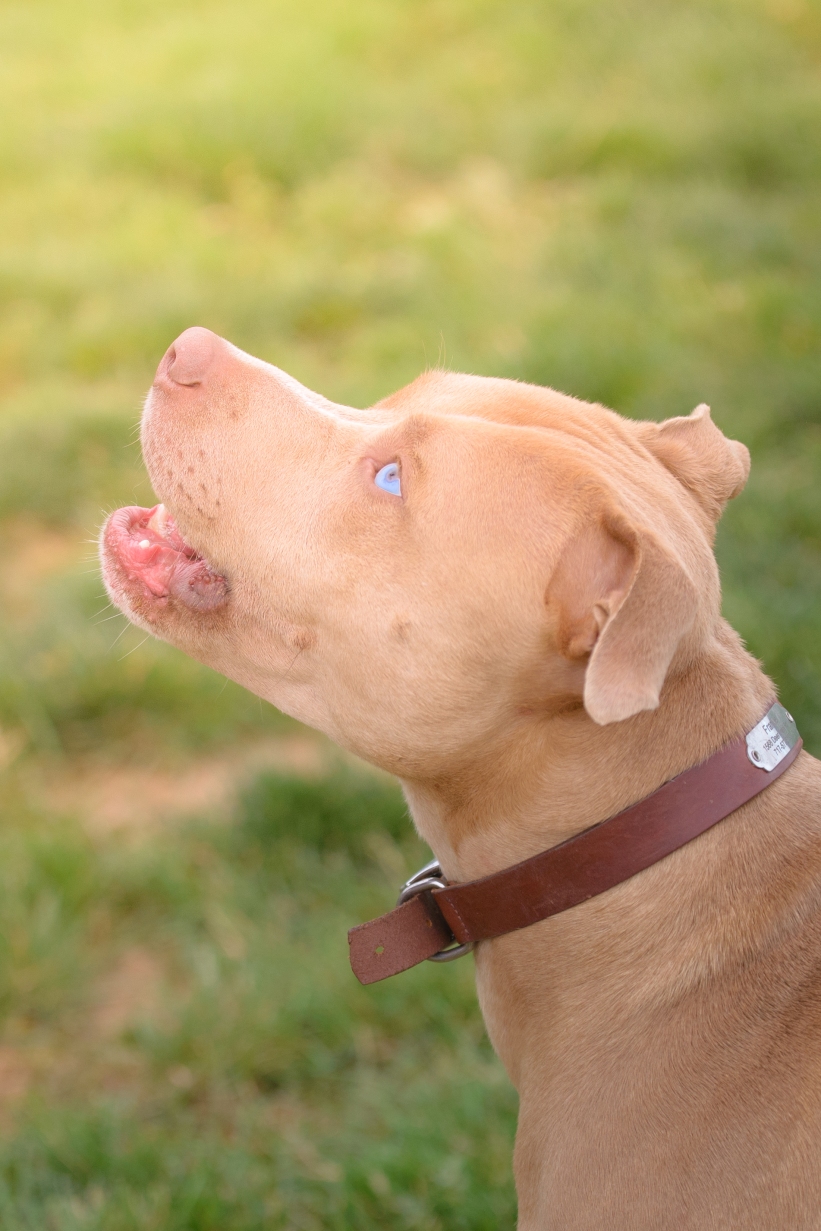 After that I took him home and cooked him an enormous plate of eggs with ham and his favorite treats piled on top. Then he watched birds and napped on the screened-in porch with Flannery and Gracie, while I sat and soaked him up, memorizing all of him. Next, we went for a long hike and I let him stop and sniff as long as he wanted to wherever he wanted to. It took us two hours to go just over a mile. He drank from the creek and got his paws muddy and pounced on a snake. 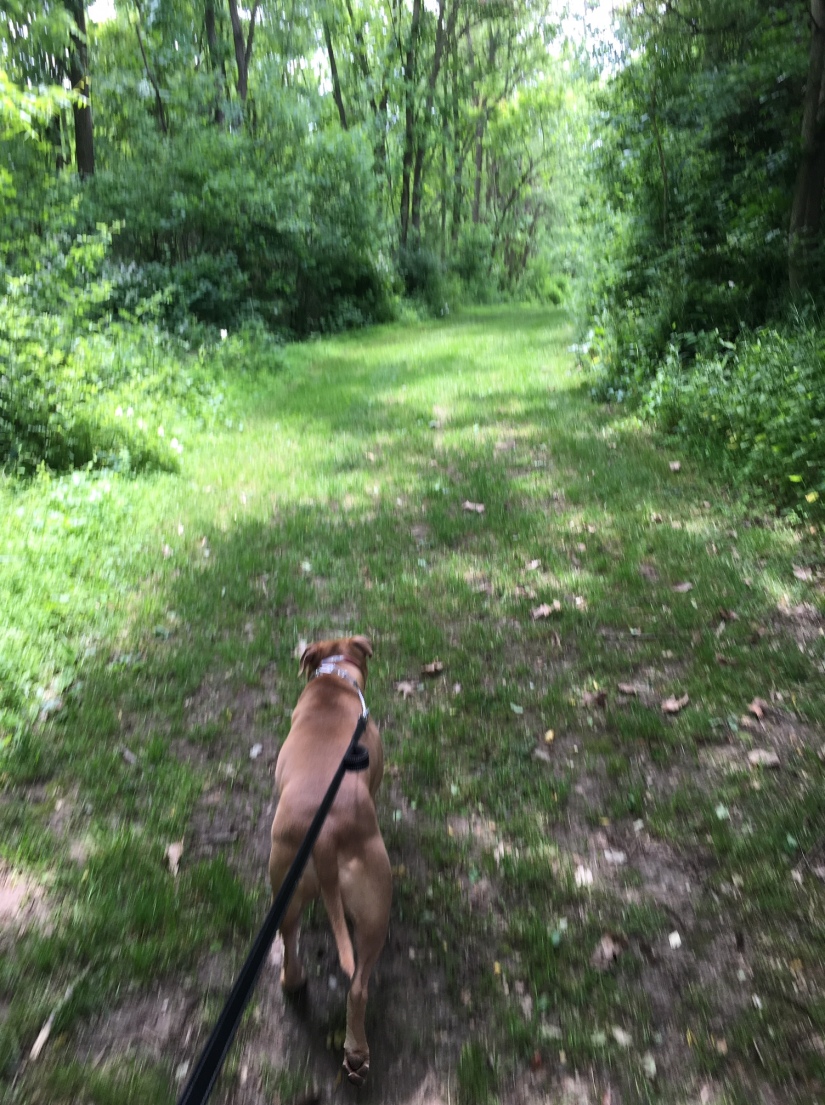 On the way home, we stopped at the pet store and I let him steal as many treats as he wanted from the low shelves (and then paid for them while the clerks fed him even more treats). Late in the afternoon we took a walk in our woods and had an extra-long visit at the fox den.

Just before dinner, I let him play with the puppies. His tail was going like a windshield wiper as he snuffled and licked the puppies and let them gnaw on his face. 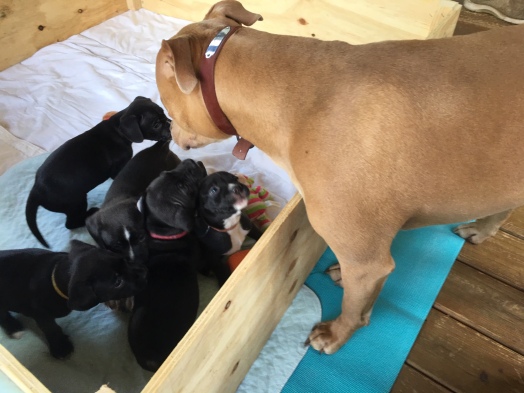 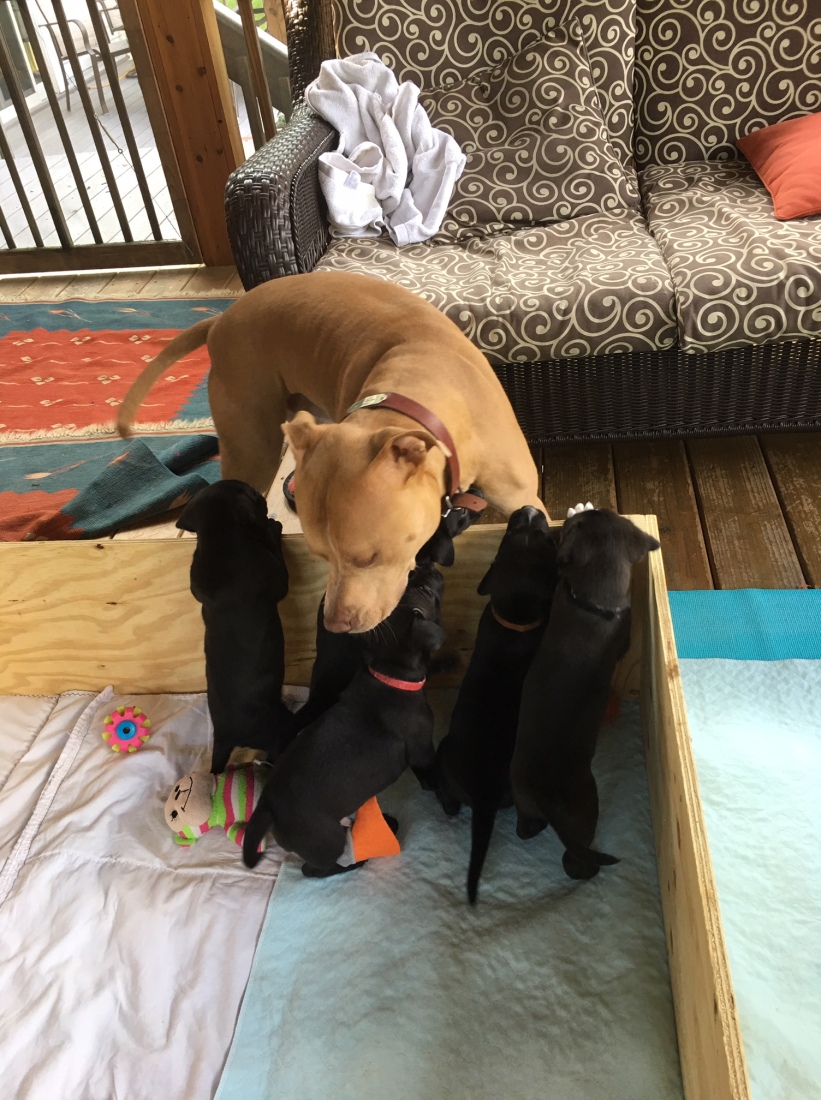 And later, after Nick finally came home. We snuggled him all night, neither of us sleeping, but Frankie snoring contentedly after such a good day and both him humans with him.

In the morning, we took him to our vet’s office, a place he loves, and I tried very hard to keep it together so Frankie wouldn’t think it was any different than any other time he’s been there for a shot. He passed peacefully, and we brought him home and buried him on our hill below the spot where he has chased so many squirrels into the woods.

Addie painted a stone to place on his grave. (Sadly, she did not have the opportunity to say goodbye to Frankie, as he continued to threaten her through the glass door that separated them.)

I am devastated. Leveled. Beyond repair at the moment. When I close my eyes and try to sleep, I hear Addie’s happy greeting and then her scream in terror and Frankie’s bark and snarl and ferocious attack. On repeat. But then I open my eyes and I miss my boy. I miss his snuggles and his big pitbull smile, his happy energy, his eagerness to please, and how he loved all of our foster dogs.

I don’t know yet what I will learn from this, but the behaviorist told me that she gets ten calls like mine a day, so I know I am not the only person forced into this impossible place that hurts so very much and will haunt me all of my life.

But I won’t let this be the end. Something good will come of this.

I will share Frankie’s story. And in his name, I will save as many dogs as I can save. I will work until there is no need to save dogs like Frankie from shelters.

I don’t want anyone to take from this that pitbulls are dangerous. They aren’t, they’re just dogs and like any dog they can have issues – mental, physical, or the ones created by disrespectful or cruel humans. When our dogs shows signs of dangerous aggression we need to manage them and when we can’t manage them, we need to make hard choices, not pass them along to a shelter or another home unawares.

I loved Frankie more than I’ve ever loved a dog. This hurt will be with me forever, the guilt, the sadness, the everlasting ache for what could have been. It is not right or fair, but it was the only choice. I did not want Frankie to be a tragic headline someday and I could not bear to see him live out a life in a kennel. A compassionate death is much better than a live half-lived without someone to love you.

If you disagree with me, that is your right, but please do not compound my pain by sharing those thoughts with me. What’s done is done. And I will forever be scarred by this, the dog-shaped hole in my heart will never be filled.

Hug your dogs close. Don’t take a moment with them for granted. 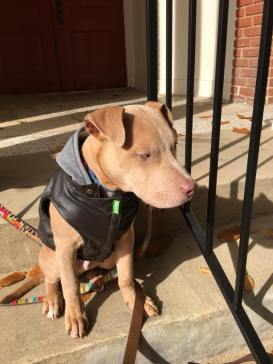 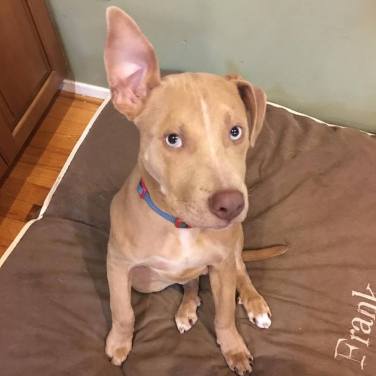 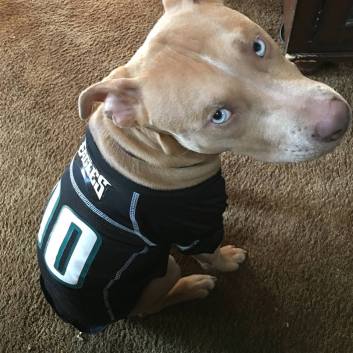 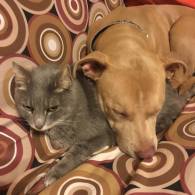 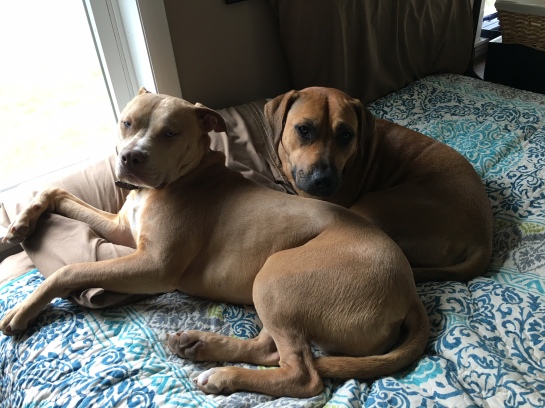 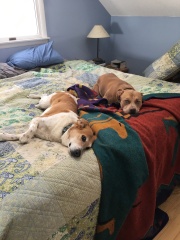 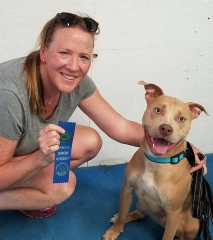 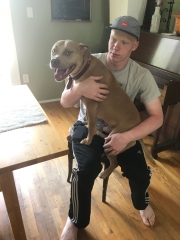 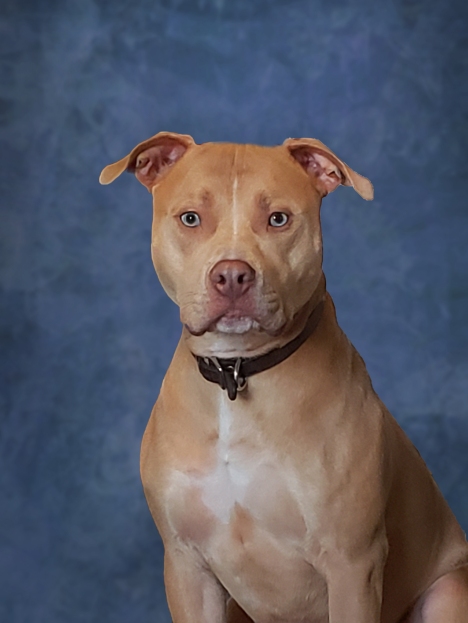 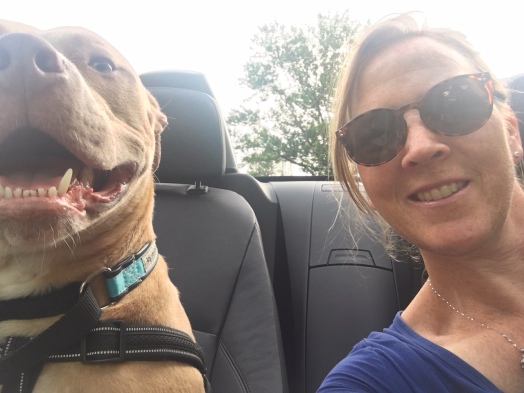 If you’d like to know more about my blogs and books, visit CaraWrites.com.

Another Good Dog: One Family and Fifty Foster dogs was released August 2018 from Pegasus Books and available now

98 thoughts on “The Most Impossible Decision”