Houdini was adopted on Sunday by a lovely family who met him at an event the week before. He’s a first family dog and they were over-the-moon happy to welcome him to their family.

Nick handled the adoption because I was attending the volunteer seminar for OPH.

The day had nearly wrapped up and I quick checked my phone to see if there were any messages from home regarding the adoption, the ten-pack of puppies, or their mama.

Nothing from home but there was a message from the adoption coordinator who handled Houdini’s (aka Hot Diggity) adoption. He had slipped his collar moments after the adopters arrived home and he was now missing. OPH was already on the task, circulating a flyer, contacting Find Toby in PA, and the adopters were out looking for him.

My heart was in my throat as Nancy, who was my passenger on the drive to seminar and was now my hostage in the search for Houdini, and I raced to Hanover to see if we could help.

Several sightings had already been reported. Houdini is a hard dog to miss and he was apparently running all over north Hanover in a panic. Nancy plotted his progress as we drove and it was clear that he was doing what many missing dogs do – he was circling ‘home’, but his circle was at least a mile or two in diameter.

My biggest fear was that he was truly lost – having only spent a few minutes in his new home before escaping on his first potty break. His movements though, made it seem as if he knew where ‘home’ was, he was just frightened and panicked.

(Except one report that claimed he was a loose white pitbull – why is it that everyone seeing a loose dog immediately thinks it’s a pitbull? Does it just make the situation sound ‘scarier’? Or has ‘pitbull’ become the catchall for any dog in trouble? And, I’m compelled here to remind everyone that there is no such thing as a pitbull. That’s an umbrella term for dogs with muscular builds, large heads, and small ears – none of which, I might add, describe Houdini.)

I’ve only ever been involved in one other lost dog situation and as then, I truly wasn’t sure what the best approach would be. All I really knew was the missing dog. I loved him and I knew he trusted me, so I raced to Hanover in the hopes that my presence would help in some way.

When we arrived, we spoke with the adopters, who were devastated. Houdini had slipped out of his collar and bolted, something I assured them was sadly common for newly adopted dogs. At the same time I cursed myself for not sending him home with a martingale collar. I just didn’t think he needed one. He’d never tried to slip his collar, he doesn’t have a small head, and he was pretty much glue to me while he lived here. Even on the occasions when he escaped his fence, he only did it to get to me.

You can bet that no adopted dog will ever leave my house without a martingale collar or harness again, but that vow didn’t help the current situation. I assured the adopters, who were adopting their first family dog that they did nothing wrong. They didn’t know better; this was on me. It didn’t help that some unkind people were slamming the adopters on Facebook for not have a martingale collar or slip lead on Houdini when they brought him home. Why people are compelled to do this, I’m not sure. Yes, there is a lesson to be learned here, but not until we safely get this dog home, and pointing fingers helps no one.

Nancy and I searched near all the sighting spots; my fears grew that Houdini would get hit by a car. Everywhere we went there was traffic. There were so many spottings because it’s a busy, populated area.

It soon grew dark and the sightings stopped. Hopefully, he was hunkered down somewhere safe. We encouraged the adopters to leave food out in front of the house, plus a few of Houdini’s ‘things’, and I promised to be back first thing in the morning.

The next morning I checked in with the adopters and learned they had spotted Houdini in front of their house next to a telephone pole the night before. It was the same spot where Nancy and I had stood and talked with the adopters. Such relief! He did know where ‘home’ was. I quickly got dressed, dealt with my pack, and raced to Hanover.

I took Fanny with me since she was Houdini’s buddy and I figured he would recognize her scent. 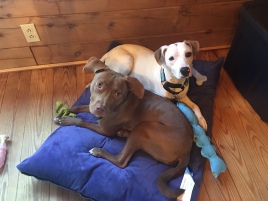 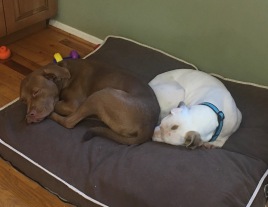 We walked many, many loops from the adopters’ house and back, hoping to leave scent trails for Houdini to follow. But hours later, there were still no reports, no sightings and I was honestly terrified that he’d been hit.

Finally, near lunchtime, as his adopter and I were talking in front of their house, Houdini flitted by between houses across the street. Fanny and I set off to see if we might encounter him. We spotted him nearly two blocks away. Fanny barked, and Houdini paused, and then took off in the opposite direction, only to encounter a car and then turn and go another way. Clearly, he was running blind.

I put Fanny in the car, gathered the treats and hot dogs (thanks Karen Roland!) and spread them in a trail across the yard of the empty house across the street and along the front of the adopter’s house, and then I sat on a rock in their garden and hoped.

An hour later, a neighbor reported seeing Houdini sitting in a yard nearby but running at the sight of him. The adopters who had been walking and walking and walking and desperately trying to find some way to help, went to the store to get more hot dogs (and a harness for Houdini when we caught him).

I changed my position and sat in the yard of the empty house across the street because I was worried about all the traffic on their street. All the sightings had been on the opposite side of the street from their house and I didn’t want Houdini to get hit crossing the street to get to their house or to me. I also worried that the sight of a person at the house might set him off again.

I had just settled in for the long wait, when he appeared across the street circling my car with Fanny in it parked near the adopter’s house. I grabbed a bowl of treats and began creeping towards him, channeling the advice of another OPH volunteer, ‘go low and slow.’

I was halfway across the street walking in a crouched position and hoping that by some miracle no cars would come up the busy road, when he saw me. He immediately ran back across the street, but crossed my path as he did and slowed. I thought he would stop and said, ‘good boy’ quietly, but that only seemed to send him running. What finally stopped him was a hot dog in the grass. As he paused to chew it, he looked back at me, still crouched in the middle of the street. (Thankfully, a dog-saavy good Samaritan had stopped her car in the middle of the road twenty feet or more away to block traffic but didn’t get out of her car.)

The moment when he recognized me still brings tears to my eyes. He wagged his tail, dropped the rest of his hot dog, and raced to me with a big grin on his face. I put my arms around him and ushered him to the side of the street while he licked my face.

The woman in the car, didn’t move until she could see that I had the slip lead on him and he was secure. She paused as she passed and said, “So glad you got him!” and then drove off, before I could thank her. I don’t know that I would have gotten him if she hadn’t done what she did.

So, many, many lessons to learn here. And yes, I’m tired of learning everything the hard way, so please take all this to heart.

Any new dog, no matter how easy-going, calm, sweet, whether it is from a rescue, a pet store, a breeder, a friend– is frightened. Everything is new. Their instinct will be to run. They need their new people to make them feel safe. Use a martingale collar, harness, and/or slip lead (I would use two of them) whenever the dog is outside. Even if you have a fenced yard. Even if you think the new dog already loves you.

In the new home, for the first few days, or even a week. Give the dog plenty of time in a crate to ‘reset’, and when the dog is out of the crate in the house, keep a leash on the dog so that you can quickly gain control if the dog panics for any reason. It’s also handy so you can quickly re-direct the dog outside if he has an accident. Keep doors locked and be sure all family members check where the dog is before going in/out.

The adjustment to a new family will take time – more for some dogs, less for others. I have no doubt that within the week Houdini will be happy and secure in the knowledge that he finally has a much deserved forever family. They are wonderful people who only want the best for him and I am confident will spoil and love him all the days of his life.

I asked Houdini’s family what they were going to call him and they said, “Probably Houdini. We thought of other names, but he seems to know this one and it kind of fits.”

I suppose it does, but part of me hopes they’ll change it because his disappearing days are over.

If you’d like regular updates all my foster dogs past and present, plus regular videos of the PA pups, be sure to join the Facebook group, Another Good Dog.

For information on me, my writing, and my upcoming book, One Hundred Dogs and Counting: One  Woman, Ten Thousand Miles, and a Journey into the Heart of Shelters and Rescues, visit CaraWrites.com.

Recently released from Pegasus Books and available anywhere books are sold: Another Good Dog: One Family and Fifty Foster Dogs.