It’s been a three-dog weekend. Which means that I’ve spent a lot of time on the other end of a leash. This morning I successfully walked “big dog” (new foster Carla) and “little dog” (old foster Wheat Penny) at the same time. We made it just over two miles before Wheat Penny began dive-bombing Carla. Carla was unfazed, ignoring her full body pelts and then simply dragged the varmint along after she grabbed Carla’s leash and attempted to fling her about (effectively flinging herself about instead.) Carla’s got a few pounds on Wheat Penny. 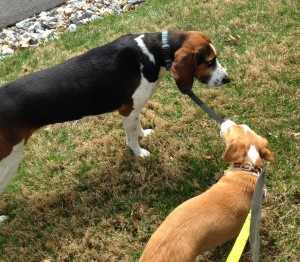 Let me introduce you to Carla. She has a regal way about her, rising above the other dogs snarls and craziness. She is a gorgeous 65+ pound Treeing Walker Coonhound who was surrendered by her owners (previous OPH adopters) after four years. The owners are expecting a fourth baby and Carla became too much for them. As her previous owner put it, “Carla is just existing here, she’s not living.” Here was this enormous hound dog trying to be a suburban pet in a busy household who increasingly had no time for her. I can’t resent these owners for surrendering her, only be glad that they did. Carla deserves a better life and they knew that. I’m sure it wasn’t an easy decision. Because who could toss out a face like this-

Having grown up in Alexandria, Carla has obviously tried to fit the suburban neighborhood dog mold with only limited success. Unlike your typical coonhound, Carla has wonderful manners. She waits patiently while I prepare her dinner, she walks nicely on a leash rarely pulling, and she is polite with the other dogs. I’m hoping her time here will help her rediscover her hound roots.

On our first walk Saturday morning she was terrified at the sound of the neighbor’s rooster. Now, what self-respecting coonhound is afraid of a rooster? One raised on a street with a neighborhood association.

And when we walked past the neighbor’s burned out clunker car sitting on blocks, she shied from it warily but couldn’t take her eyes off it. (I’m thinking somewhere in the recesses of her heart, she knew this was a car her granddaddy probably roamed the countryside riding shot gun inside.)

She accompanied me up the hill to let the horses out and almost slipped her collar in fright when the horses set off away from the gate at a gallop. But she couldn’t take her nose from the ground as we circled the chicken pen – maybe the smell triggered a little dejavu.

The biggest thing about Carla is she’s big. She takes up a lot of space. When she wags her tail it can take out nearby objects that are not tied down. When she’s in her crate and she wags her tail it thumps the sides of the cage so loud it can wake the household. Upon watching her tail-wagging reaction to the return of my husband to the house (another dog who seems to like him more!), my oldest son said, “That looks like it hurts.” 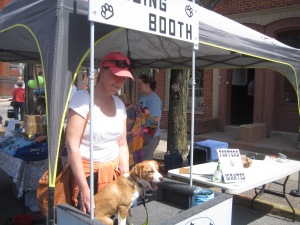 On Saturday, OPH had a booth at my favorite York festival – Green in the City. I took Wheat Penny up and she rocked the kissing booth all morning. She was so exhausted after her morning of slobbering the faces, fingers, and strollers of half of York City, she couldn’t even walk to the car. When I pulled her out of the booth for the last time and attempted to set her on her feet, she collapsed to the ground instead. She loved being pimped out for spare change at the OPH booth and spent the rest of the day snoozing happily.

I’ve enjoyed having three dogs this weekend, but it’s been a full-time job. Between keeping shoes out of Wheat Penny’s mouth, taking Carla out for frequent walks, and admonishing Gracie to “stop being such a bully,” I haven’t had time for much else. Very few chores were ticked off my list. It’s way too distracting for me to have these busy girls underfoot. Made me wish I worked full time at a doggie day care (which is basically what I did all weekend).

The other major problem with three dogs is that I only have two hands so inevitably someone is missing out and making me feel guilty. I had the same issue with three kids. 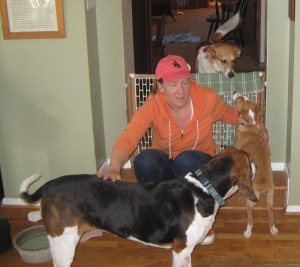 At the transport Friday night I listened to other fosters talk of their households of four and five dogs and thought, “Maybe that will be us someday.” I’m pretty sure it won’t be. We may have physical room for that many dogs, but I haven’t got emotional or mental room for that many.

Note: Wheat Penny is scheduled to be officially adopted tomorrow afternoon! I’ll miss my little imp and her crazy enthusiam for everything (note the picture below the cherry blossum tree above where she’s about to dive bomb me and Carla), but I won’t miss my office looking like this-