We had two charming visitors for the holiday weekend. After surviving ten days of three dogs, I was confident we could handle four, especially on a gorgeous weekend with no actual plans, just lots of ideas. Kylie and Hitch (sounds like a movie title) are foster dogs we dogsat over the holiday weekend while their foster parents went camping. 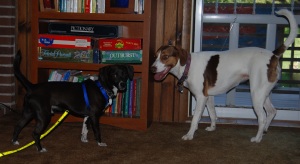 Kylie’s endless energy kept us from relaxing too much and Hitchcock’s quiet, gentle presence reminded us to slow back down.

Hitch’s foster mom, Erika, explained that Hitch was very timid and “hand shy.” When you reached for him he cowered and if he was loose he ran from you.

The first few hours went fine. I walked both dogs (or Kylie led the dog-person-dog train) around the yard. Carla was not impressed with either dog and spent the afternoon lounging on the porch, occasionally lifting her head to watch the antics of Kylie when she spotted a BUG! or a BIRD!! or a CAT! or a OMG-SQUIRREL!!!!

Because Kylie was so demanding of my attention and arm strength, I decided to take Hitch out on his own. Turns out the little guy is excellent company. Perfect manners on the leash, happy to go wherever I wanted to go, and quick to do his business. He was happy to be out on a little explore and seemed to be relaxing around me, although he still froze when I reached for him. I can’t imagine what circumstances of life brought him to this point. Seeing his terrified face when I reach down to scratch his ears, broke my heart. We sat in the sunshine for a bit, side by side, but me keeping my scary hands to myself, and then it was time for me to get back to work, so we headed to the house.

As we approached the door, Hitch balked. Luckily, he was wearing a “martingale” collar so when he stopped and I pulled, he didn’t slip his collar. (After watching Carla charge away without me this morning after slipping her collar on our morning run, I’m going online to order one!) I explained to Hitch that we had to go back inside, but rather than pick him up (since he was afraid of my touch), I pulled a little stronger on the leash and stepped into the house. Hitch didn’t move and I tugged again, this time the collar snapped and Hitch took off like a shot up the hill away from the house. Bizarrely, the nylon martingale attachment had simply broken off. Hitch weighs all of 10, maybe 15 pounds so it wasn’t his brute strength or size that snapped it. I didn’t have to time to wonder about it.

I grabbed Kylie, figuring Hitch knew her and we took off up the hill after him. I wasn’t sure if calling his name would make him run faster or bring him back. I could hear Erika saying how hard it was to catch him in a fenced yard. Now, I’d have to catch him in Southern York County, unless he made it to Maryland, since that was the direction he was running.  I was already picturing me and the rest of the search party out with our flashlights that night tromping through the surrounding fields. And then tomorrow the girl scouts would organize search teams and maybe bring us bottled water…..

Dreading making the call, but knowing I had too, I called Erika. She doesn’t know me very well, so I’m sure her first thought was, “Why did I leave my little dog with this idiot?” To her credit, she didn’t say that, she said something like, “He won’t go far, he wants to be with you. I’m sure he’s scared. Just try to get him to follow Kylie.”

We spotted Hitch at the top of the pasture just on the other side of the fence. As Erika predicted, he ran gleefully towards us, tail wagging. Erika stayed on the phone with me and talked to me as we walked back to the house with Hitch running big looping circles around us and Kylie practically levitating on the end of the leash in her joy at the adventure.

Following Erika’s advice, I led Kylie (and Gracie who had joined us at this point. Carla couldn’t be dragged into our drama and just thumped her tail as we passed) into the house, leaving the door open for Hitch to follow. We kept walking without looking back and I hid around the corner in the hall, leaving Kylie in view. After several tries, Hitch followed her in and I quickly closed the door.

When the kids got home from school, I told them about my afternoon’s adventure and said, UNDER NO CIRCUMSTANCES are you to let this dog out of his cage. Then I went and bought a small blue harness for Hitch to wear.

I thought our crisis for the day was over, but as usual, I was wrong.

Later I was in the kitchen preparing food for our impromptu cookout that evening. It was a belated birthday dinner/new tractor celebration with several other families. Because I knew I’d have to keep Hitch in his crate all evening, I’d put a babygate up and brought him in the kitchen with me so he could have an hour of freedom. He was good company. In fact, he was such good company, I forgot about his earlier escapade and realized too late that I should have warned my 18-year-old son as he paused in the doorway on his way out for the evening (my birthday and new tractors don’t register on his radar). Hitch shot out the door in a blink and took off up the hill.

This was not on my agenda. I had people arriving in 30 minutes, shrimp to marinate, a kitchen to tidy, dishes to find, veggies to cut up. I did not have chasing down a slippery, crazy-shy dog on my agenda. And yet, it is the tyranny of the urgent that dictates our days, isn’t it?

I spent the next 45 minutes trailing Hitch while trying to maintain control of Kylie. Of course, the moment we almost had him back in the house was when a van full of kids pulled in the driveway and off he went again. Happy ending, though. He did eventually follow me, Kylie, and Gracie into the house while our newly arrived guests hid in the kitchen. Everyone enjoyed playing with all the dogs, even Hitch, and it was a fun night. 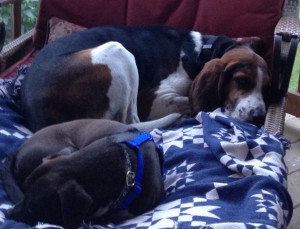 In fact, it was a fun weekend. We took our little guests on several adventures and Carla discovered they both liked playing in the stream with her. Gracie watched their antics with disdain from the shore. Hitch turned out to be a major-league snuggler and everyone got a little time in with him, even Carla.

I’m not sure I’m ready for four dogs again any time soon, but this weekend did teach me a few lessons –