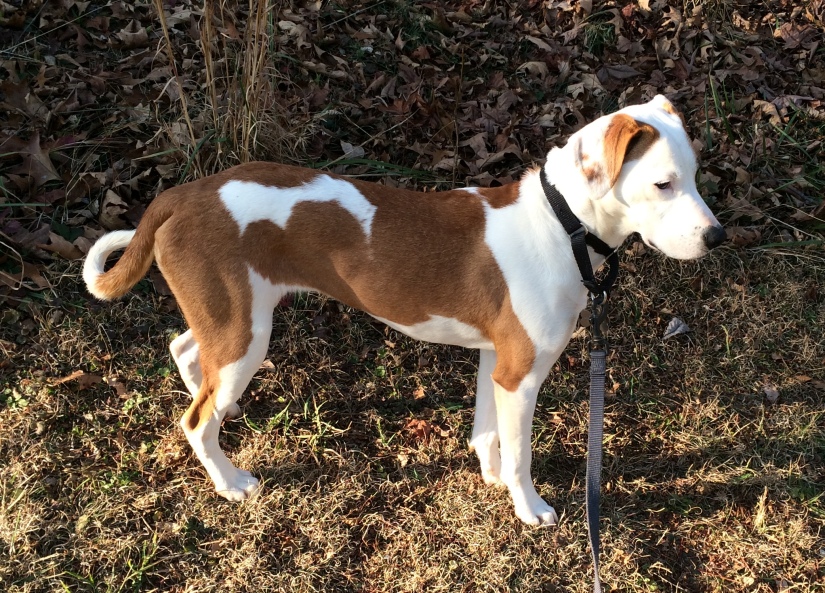 So, the gloves are off. Hadley may be a traumatized little soul, but she still has powers beyond her little thirty pound self. 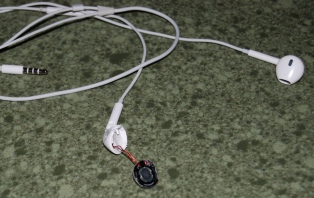 This week she ate the remote control, destroyed Ian’s favorite set of ear buds, and obliterated countless nerf darts. She seems attracted to things that smell like us – shoes, devices, playing cards, etc. I was forced to put away my puzzle and now there will be no puzzling for the duration. I like to keep a puzzle going on the coffee table in the wintertime. It’s great for occupying my busy mind while watching football/basketball/whatever nonsense hubby has on the tube and is the perfect activity to do by the woodstove. But, alas, Hadley also likes puzzles. Eating them.

As she’s gotten comfortable with those of us who live in the house, we’re getting glimpses of confidence. Last night, my nearly six foot 13-year-old was lying on the couch where she likes to nest, so she simply sat on top of him. 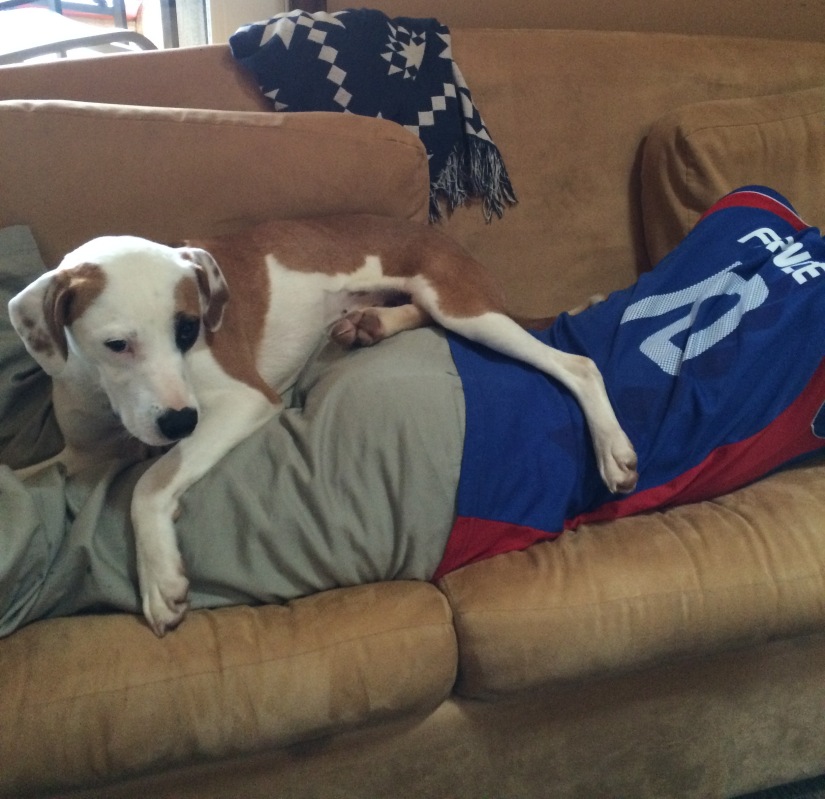 She’s finally eating dog food on her own (yay!), but because she is easily spooked off her kibble (and Gracie is a porker who is happy to pick up the slack), I have to feed her in her crate which I generally don’t like to do. Choosing my battles here.

She’s begun hoarding toys, piling them up around herself in all her favorite spots. She’s an excellent enforcer of the put-your-shoes-where-they-belong rule. 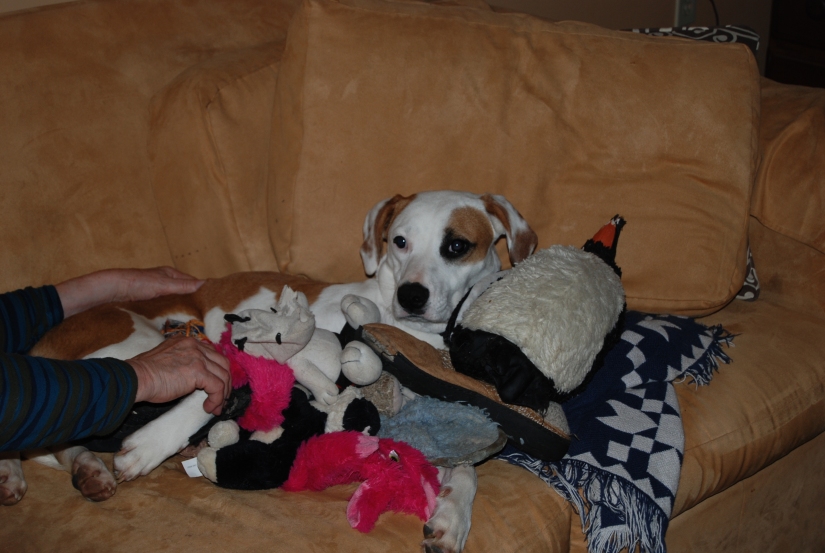 And she’s discovered that there’s nothing quite like a cheezit – she’ll even brave the loud noisy kitchen at dinner hour if she thinks there’s a possibility that I might slip her one.

This past weekend, we took her for her first walk on the road. To date, she’d only gone as far as the end of the driveway, before bolting back towards the house (pretty much running in place since she doesn’t have a chance at dragging me uphill).

Nick clipped a leash on Gracie to serve as leader-dog (a very new role for her, but she’s impressing us all with her kindness towards Hadley). My mother-in-law is visiting, so she and I followed with Hadley who was on high alert, darting back and forth in front of us, nearly taking one or both of us out in her panic. I took it as a good sign that she seemed happy to follow Gracie and wasn’t pulling me back towards the house. 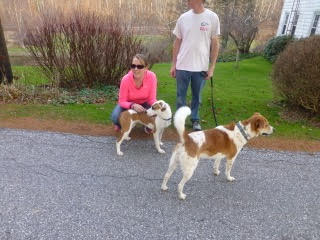 We made it maybe thirty yards from the driveway before cars began zooming up and down the road. A neighbor has recently opened a Christmas Tree farm and the weather over the weekend invited plenty of business. As each car approached, Hadley hit the deck, trembling and crawling away from the road. Once the car passed, she seemed to recover pretty well, so we pushed on. We made slow but steady progress – walk – CAR! – brace for impact – wait a moment to be sure it’s really gone – walk.

I wasn’t sure if this would be an effective immersion therapy or set her back a few days, but I figured it couldn’t get any worse for her. Until it did. The next car that came along, was full of some friends of ours, so they slowed to say hello. I waved and Hadley bolted for the bushes. While we saw smiling friends, what Hadley saw was not only a CAR, but a CAR WITH A TREE ON TOP AND A STRANGE PERSON YELLING OUT THE WINDOW. Too much for her little blown mind, so we gave her a minute to recognize the fact that she survived the onslaught and then we started back.

As soon as we were headed for home, Hadley pulled like a sled dog, only pausing momentarily to duck from passing cars. We were home in no time.

I think, overall, Hadley is doing great. Her personality is starting to show. She’s clever and sensitive and very loving. She’s gotten brave enough to let the cats approach her and doesn’t seem the least bit impressed with their haughty attitude. She remains a mostly silent dog, the only sound I’ve heard was the last few mornings when she gave a soft whine of happiness as I opened her crate. We’ve yet to hear her bark.

I think this week she will only blossom more as the positive experiences pile up and her curiosity grows bigger than her fear. I only hope she doesn’t get ahold of anyone’s iphone. 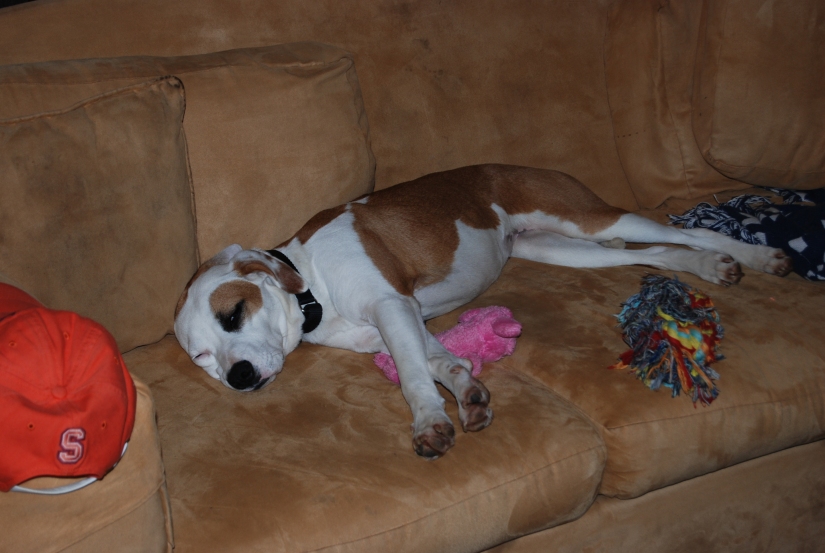 2 thoughts on “Curiosity is More Powerful than Fear”