The puppies have arrived! The cuteness is pretty much unbearable, so it’s good that they stink pretty bad.

At five weeks, they have no qualms about walking through, playing with, or even sleeping upon each other’s poops. I’m trying to stay on top of it (so to speak), but with the Christmas chaos, visitors, my own work, Hadley, GRACIE (no, we haven’t forgotten our own personal pup), and the fact that I have to bake six dozen cookies and package them beautifully for a cookie exchange tonight, it’s pretty much impossible to keep them poop-free.

My five little charms are half of the litter of pups that I witnessed Lily give birth to back in November. They are growing fast and resemble little bear cubs. While I’ve only had them 24 hours, here’s what I can tell you about them as individuals-

Begonia is the pup I requested. For some reason, in the pics that Chris posted and in my few visits to see them, she stood out to me. She reminds me the most of her beautiful, regal, remarkable Mum. She has the same face and there’s something calm and wise about her. Lily is a special dog and I think whoever adopts her will be one lucky family. I hope Begonia will have her mom’s heart. She is a little lighter than the rest of my brood and not nearly as pushy.

Foxglove also looks a lot like his mom, but on steroids. He’s a big boy. The biggest. I would encourage his adopters not to look at the puppy weight predictor charts as he is already 8 pounds at five weeks. They could very easily be wrong. (!) He’s also a lot of fun and a first rate snuggler, curious, and not the least bit bashful.

Snapdragon is a noisy boy. He is all black, but has a tiny white mark on the back of his neck which Chris said reminded her of a scale, so that’s why she named him Snapdragon. He’s living up to the dragon portion of his name with plenty of odd noises and whines – sounding more like a dragon than a puppy. He wants the most attention and will rush the puppy pen walls if he catches sight of anyone. He’s definitely ready for adventure and will be one fun pup.

Pigweed is a little darling. She’s the smallest one of my five. I remember when she was born. We all said she looked like a little guinea pig with her pink/white nose. She is an absolute love. She loves to play and is the first to claim any new toy I toss in the fray. She also loves people and is a first rate cuddler. She is a determined little girl and the boss of the food bowls, growling at the others and claiming the last few bites. She may be small, but nobody’s gonna push her around.

And then there’s Sneezewort. I love his name. It always makes me smile. The perennial herb Sneezewort looks a lot like chamomile – a tiny white daisy. There are lots of great stories in history about Sneezewort – including that Achilles used it to heal his wounds and bridesmaids carried it in bouquets to ensure the bride and groom a happy life. Learn something new every day. Sneezewort is a pretty pup, like his namesake. He’s a gray camo color and was one of the first pups born. He has one crystal blue eye still, while the other seems to be graying out. It’s rumored the father of these pups may be an Australian Shepherd and Sneezewort’s appearance would vouch for it. He’s a busy, busy, busy boy who loves to play, pouncing on the rope toys and racing around the pen, tumbling over his siblings. He’s had the hardest time leaving his mama, doing the lion’s share of the whining. He’s needed some extra cuddling.

While these puppies will be plenty of work, they will also be a bundle of fun. We are all excited about having puppies for Christmas. I’ll be sharing their puppy joy on my twitter and Facebook feeds. They’re too cute to keep all to myself.

I know you’re all wondering how Hadley is handling this. I worried all week that she would be overwhelmed by the puppy chaos, but it’s been quite the opposite. Hadley seems to be in love with the puppies. Whenever they whine she gets up from wherever she’s hiding and trots to their pen to see what is the matter. Then she’ll lie down beside the pen and let the puppies poke at her and lick her. She seems to worry about them. We’ve seen more activity out of Hadley in the 24 hours that the puppies have been here than in the last two weeks. She seems genuinely concerned for them. It makes me wonder if they remind her of her own siblings. I immediately started filling in the blanks of Hadley’s story – maybe she was taken from her litter too early, maybe she is so scared and sad because she misses them. I’ll never know, but if these little cherubs can help Hadley come out of her shell – it will be my best Christmas present. 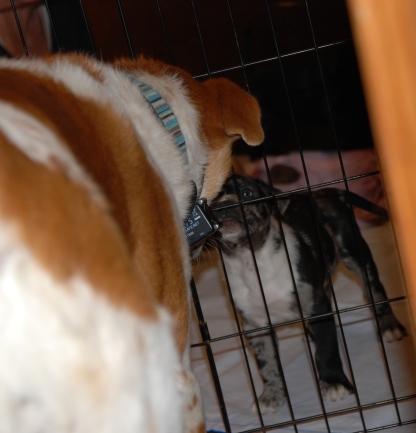 (Gracie greeted the puppies the same way she greets every foster – with snarls, drooling, and threats. Luckily, it’s all an act and by the next day she was ignoring them as usual.)