I wrote a really nice post for today. It’s positive and uplifting and all about how I spent the weekend choosing grace over irritation in response to a pile of unexpected (and unwanted) situations. I’ll probably post that one on Thursday because in addition to my Pollyanna dribble, there’s some good stories on Gala, the coolest foster dog we’ve had in some time. (No offense to some of the other amazing dogs we’ve had – she’s just simply the ‘cool kid’ and we are totally enjoying her.)

I’m having trouble posting my intended post because since I finished it, I received some truly awful news. News that has my heart aching and my head distracted. (Fair warning: this is not a fun post; feel free to skip to Thursday.  That’ll be much more uplifting. Promise.)

My cat, Crash, has been out of sorts for a month or so. He’s lost a little weight, despite eating, and his normally pristine coat is not so pristine. More than that, he’s not catching nearly as many baby spring bunnies or assisting me in the garden or following me to the road to fetch the paper or even hissing much at the present foster dogs. I took him to the vet Saturday morning and yep, something wasn’t right.

His belly has fluid in it. My vet tapped it to get some of the fluid to send to a lab. He also took xrays, but the fluid made it hard to see. He told me that it might be cancer or it might be a horrible virus called FIP, which is untreatable and fatal.

So I spent the weekend trying not to think about it and when I did, I prayed my cat would have cancer. I never imagined sending up a prayer like that, but at least cancer is potentially treatable.

I love this cat. I picked him out at the SPCA about five years ago. At the time (although I suspect this is a regular occurrence) the SPCA was overloaded with 400+ cats and was offering a buy one, get one sale. I only wanted one cat, but it took me well over an hour to survey the options.

I couldn’t make up my mind and wandered aimlessly in front of the big glass windows where the cats were displayed – three or four to a cage. I paused in front of one window, not looking at the cats, but watching the technicians behind the cats who were treating an injured cat. As I stood there, eyes fixated behind the cages, a cat leapt at me forgetting that not only a cage, but a glass window separated us. He crashed into the side of his cage and fell to the floor, but then picked himself up and in true cat-style, walked away as if he’d meant to do a faceplant into the metal bars.

Our introduction wasn’t the only reason we named him Crash. When we brought him home, he proceeded to fall off ledges, completely miss his landings upon furniture and fences, and regularly knock over full glasses of water. He’d spent the first nine months of his life in a cage due to a respiratory virus and then ringworm, so he hadn’t quite figured out how to use his energy or his feet. When we brought him home he was a tiny tortoise-shell tabby with a big fluffy tail, but the next winter he grew a mammoth thick, long coat and spouted long fur from his ears. It became apparent that I hadn’t adopted a short-haired tabby, but a smallish Maine Coon. 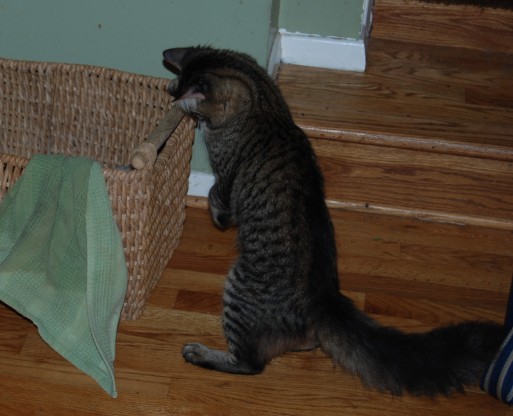 Since that first year he’s become much more coordinated walking the fence line on top of the skinny rail and catching his weight in bunnies, birds, and rodents on a weekly basis. He is aggressive in his search for our affections, leaping into laps and onto chair arms, and he loves to squeeze himself into impossibly small spaces. 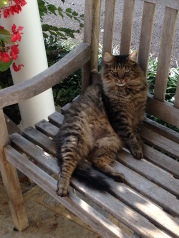 We all love Crash (except Hermoine, our other cat; she still treats him as the annoying younger brother he is).

Once I was returning from a run and Crash was waiting for me at the bottom of our property. A truck was passing and for unexplained reasons, Crash darted out in front of the truck. The truck passed over him, without touching him. The driver slammed on his breaks and jumped out. “Did you see that raccoon?” he yelled to me.

Yesterday afternoon, my vet called to tell me that Crash does not have cancer. I’m possibly the first client he’s called to give that news to, who was disappointed. Because this leaves his diagnosis as FIP, a death sentence.

“Treat him like a king,” was his response. He did prescribe some prednisone to try to alleviate some of his symptoms, but the clock is now ticking and I’m faced with the decision I never wanted to make again. It’s the real reason I haven’t foster-failed. I hate this part of pet ownership. I don’t want to play God, and yet, I don’t want my pet to suffer. But how do you know?

“You’ll come to a point when quality of life makes it obvious,” said Chris.

I hate this. Can I say that again? I hate this. No one thinks about this when they adopt the adorable puppy or bring home the uncoordinated kitten. I’ve had to make this call on three cats, one dog, and two horses. It has never gotten easier. It has never hurt less. I don’t want to do this ever again.

Yes, it’s the part of the cost for the privilege of having these animals in our lives, but right now I’m ready to forego that privilege rather than wait for Crash to become so miserable I put him out of his misery. He can’t talk, so I don’t know if spending his days curled up on the futon watching me type is fulfilling. The Crash I know loved to be outside and has always more or less, lived outside. But I don’t want to leave him out there in his weakened state. I worry that a fox or another feral cat will get him. I worry he won’t move out of the way quick enough when one of my kids or the UPS guy comes zooming up our driveway.

I don’t know how I’ll know it’s time. I suppose I have to trust that I will. But not yet. I’m not ready yet. Maybe what has to happen is that I have to reach the point where I’m suffering too much watching him suffer. Maybe that’s how you know it’s time.

All I can say is this really sucks. Not to discourage anyone from adopting a pet, but remember this possibility going in. It’s part of pet ownership. The only certainty is that someday you have to say goodbye. There’s no way around it.

Thanks for reading. I know this is a dog blog, but thanks for indulging me as it’s the cat that is on my heart today. If you’d like to see regular updates of foster dogs past and present, be sure to join the Another Good Dog facebook group, and if you’re interested in adopting one of my foster dogs, or one of many other amazing dogs available for adoption through OPH Rescue, click here.

(For more information on all my writing, books, and appearances, check out CaraWrites.com.) 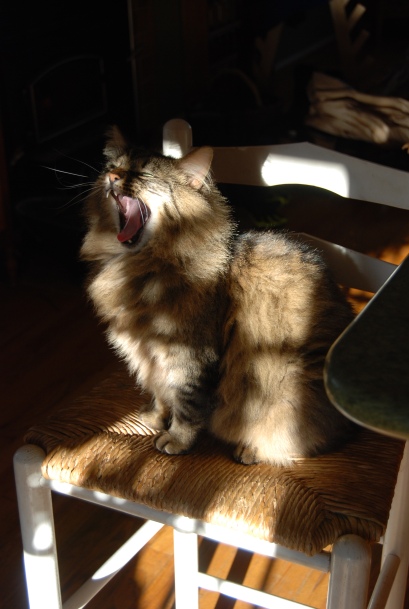 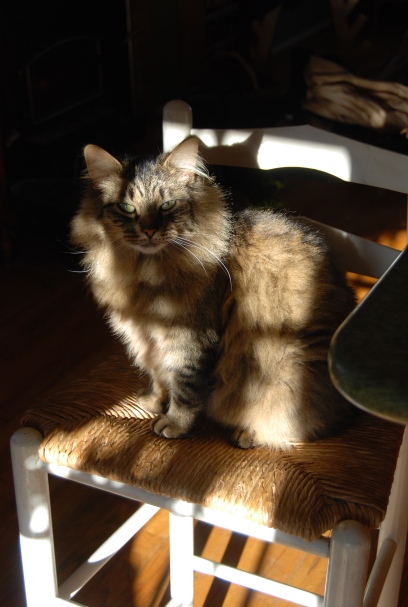