Life sure is fun when you have six lab puppies in the house. I know I say this every time, but these pups are special. They are incredibly loving and sweet. Never mind that they are beyond reasonably cute – completely off the charts of adorable. 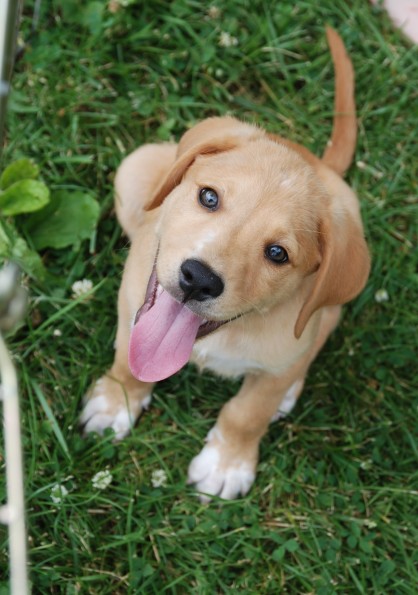 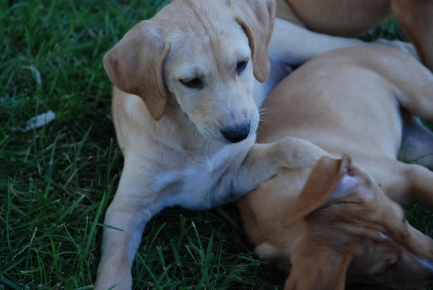 Bug is the tiniest pup and she is beautiful, smart, and sweet and has the softest ears! 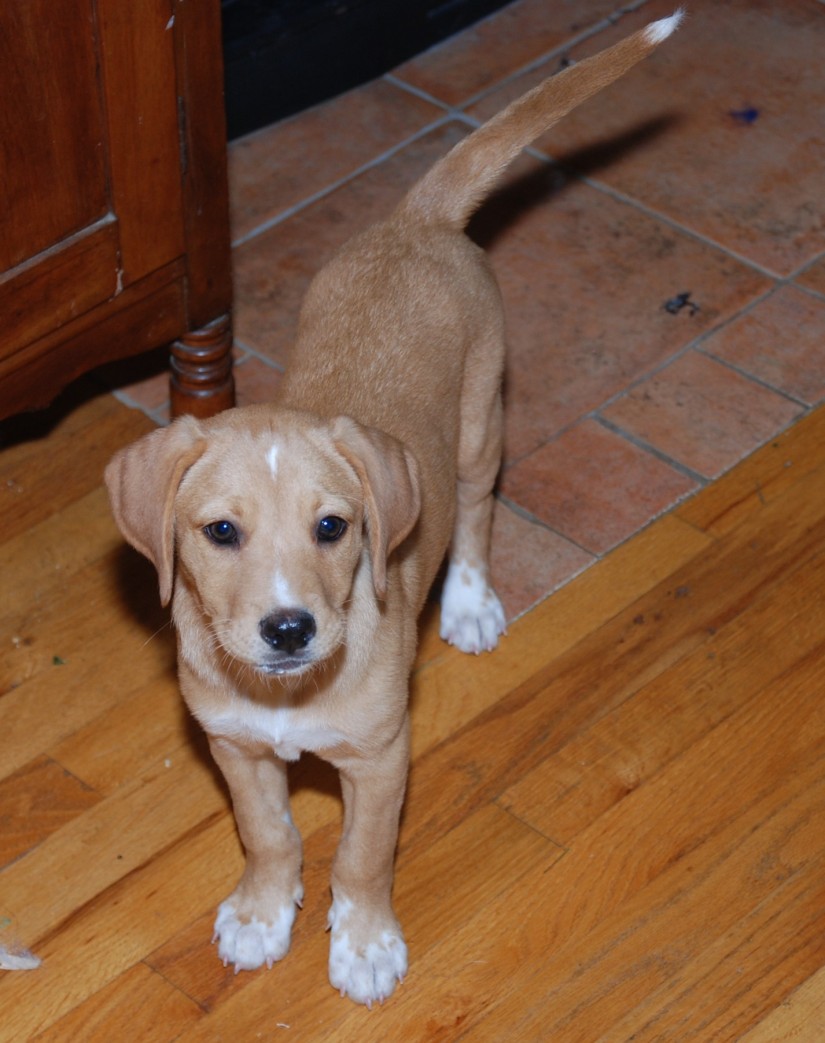 Dart is busy, confident, fearless, and so crazy cute.

Beamer is the leader and food-hog, but he is also a giant baby. (He also has really cool colored eyes – gray/greenish. Nick says they’re hazel.) The tip of his tail is broken and bent back on itself. I’ll be taking him to the vet to get it checked out in the next week. It doesn’t bother him at all unless it gets hooked in the chainlink fence (happened twice).

Cadillac is easy-going, intelligent, and the most mature – as Ian says “she’s already like a real dog.”

Opel is gentle and sweet-natured and loves her naps. She has extra folds of skin everywhere as if she’s wearing a bodysuit that’s much too big for her.

Harley is careful and quiet – she’s the watcher, right up until the moment she’s ready and then she’s full on puppy.

All six adore people and love to be held and snuggled. It’s amazing how they can go from full-on tackle-chase-bark to sweet-babe-in-my-arms instantaneously.

These pups are the age of most of my litters when they leave me. They’re getting more confident and vocal and athletic. They’re even a little bit trainable. Because they are older, bigger pups, they need more exercise and attention than the wee ones I usually house. This has been a challenge.

In the morning, because they are all desperate for attention, I don long pants and long sleeves and shoes and pull my hair up in a tight clip, so there is no exposed skin/hair to be scratched or pulled when six puppies mob me the moment I enter their pen. I climb in and sit on the floor and spend fifteen minutes being climbed on and licked and giving out as many snuggles as I can. When they finally settle and begin wrestling with each other instead of me, I fix their breakfast. I have to say, waking up to the adoration of six puppies is pretty stellar.

This is the first litter, I’ve allowed to play in my kitchen which is an exercise in exasperation. It’s hard to remember to use your puppy pad when you’re involved in a game of chase-the-puppy-with-the-strap-from-Brady’s-croc. 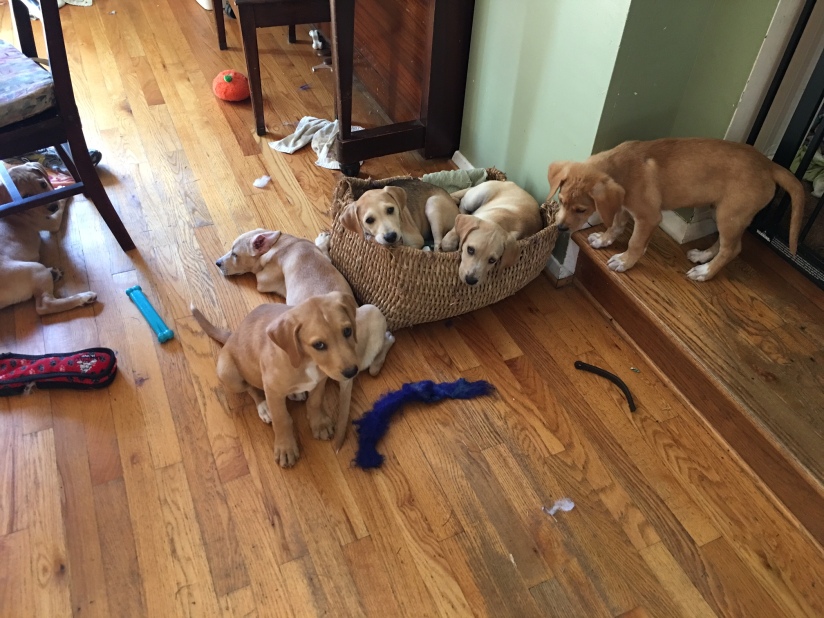 They need a bigger space than their puppy pen to burn off energy, and taking them out to the outside puppy pen is impossible without at least two helpers.

The first time I set up the pen and began moving the pups out there by myself was comical. I only wish someone had been around to film it. As I placed puppies in the pen and went back for more, some of the ones already in the pen simply climbed right over the fence and escorted me back down. It was a crazy case of two pups in, three pups out.

When I finally managed to herd all of them into the pen and climbed in with them, they played happily for about about thirty minutes. I didn’t dare leave them, worried they’d climb the fence and take their puppy party on the road. Getting them back safely to the house, proved easier than I feared. I gave them all new sticks for a distraction and then scooped up Bug and Dart and headed for the house. Sure enough, before I reached the door, Cadillac was trotting behind me. I put all three inside and went back for the others. Opel met me halfway so I scooped her up and put her inside. Then I grabbed Harley and Beamer who were still busy fighting over the best stick. After that, I didn’t attempt to take them outside without at least two people. One to help me carry and one to guard the fence. Otherwise they were all up and over that fence like lemmings. And sometimes they still are, if the spotter isn’t on her game. (In the video, Ian was pulling guard duty, but he was sufficient distraction to keep them in.)

We’re figuring out how to manage our little herd of cuteness. By the time we have it all figured out they’ll probably take off for their new homes. 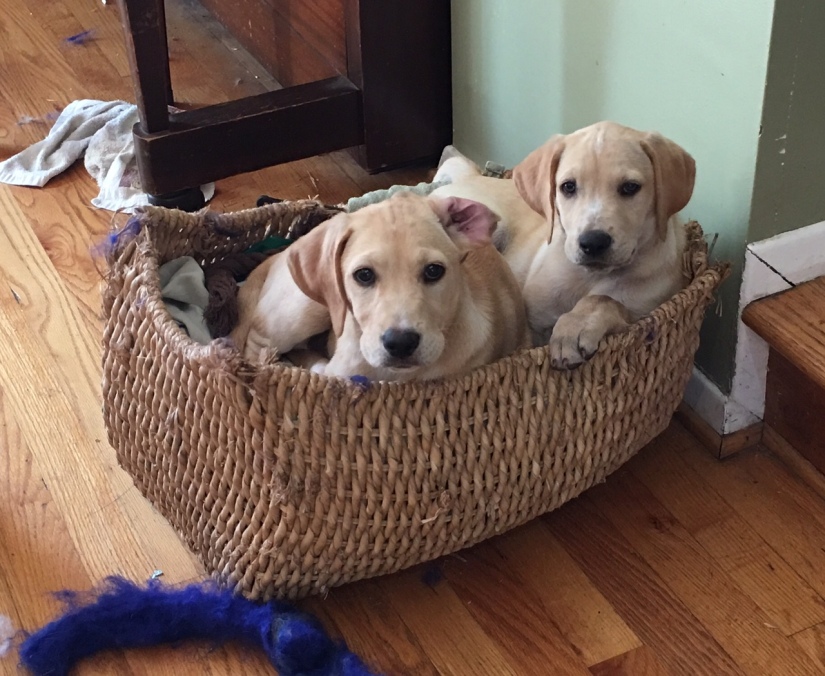 Many of you have asked about Gala. She is doing as well as can be expected. No longer on pain meds, her energy has returned and her frustration with the muzzle and cone has increased. I alternate her between a nylon muzzle that she hates and the tape muzzle that she hates less (but can get off occasionally). She is craving human contact and will heave herself on anyone she passes when I take her out to walk. All of us have bruises on our shins at cone-height from being rammed by an attention-starved Gala. Ian and I both spend time with her inside her crate and this makes her beyond happy.

I worry how this confinement will affect her longterm. At times, she seems depressed and doesn’t even get up or look at me when I open her crate. When I finally get her outside, she will just stand, refusing to move. Even the cat walking by doesn’t entice her. Other times, she whines and repeatedly bashes her cone against the sides of the crate. When I take her out at those times, she lunges and pulls and wags her tail, happy to be out. She swings back and forth between these two states all day long like a bi-polar prisoner.

I tell her, “If only you didn’t chase horses….” Gala is a dog I just might be tempted to foster fail on. She needs us and loves us. She’ll need a really special adopter. But I know that will happen. I’ve seen it happen time and again. Gala’s person is out there somewhere and she/he will find her when the time is right. And what a lucky soul that will be.

If you’d like to see more photos, updates, and videos of foster dogs past and present, be sure to join Another Good Dog facebook group.

If you’d like to know more about me, my writing, and my books stop by my website, CaraWrites.com.

If you’re interested in adopting one of the highway puppies (or Gala!), would like to volunteer, foster or donate, visit OPHRescue.org.

11 thoughts on “Life in the Fun House”