Frankie and Buford have become bestbuds. 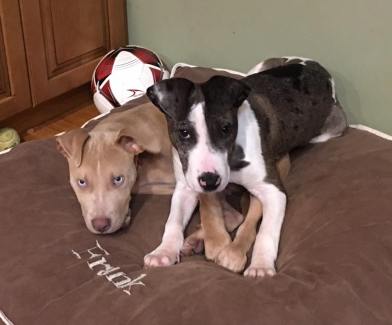 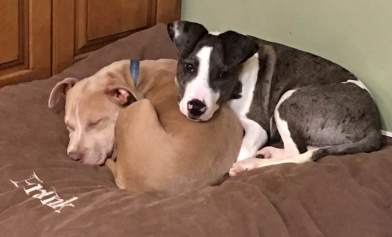 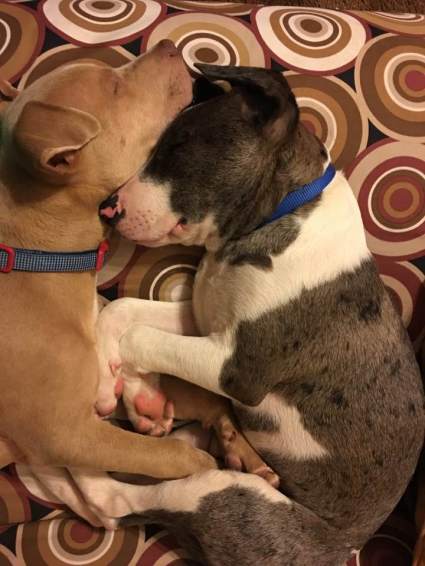 I know Frankie will miss Buford when he finds his forever family. And I’m sure that will be soon, because this is one awesome puppy.

He’s my sweet little shadow in the house, regularly nudging me with his big nose (think Spud McKenzie) asking gently for my attention. I traveled to Hanover with Buford for an adoption event and he slept quietly the whole drive which was hilly and long. At the event, he was calm and friendly—quite a difference from the other overly excitable puppy attending the event. They really don’t make much nicer pups than this. Somebody is going to score bigtime with this adoption.

I know having dogs and puppies coming and going may seem a bit disruptive emotionally for Frankie, but it’s my greatest hope that instead of being a negative experience for Frankie’s little heart, it’ll be a positive one. He’ll discover that there are LOTS of dogs to love and that even though I might be paying a lot of attention to the latest visitor, that dog is just that – a visitor. I’m hopeful it will make Frankie a welcoming, confident, friendly dog who is always ready to make a new friend.

Because that is exactly NOT the kind of dog Gracie is. 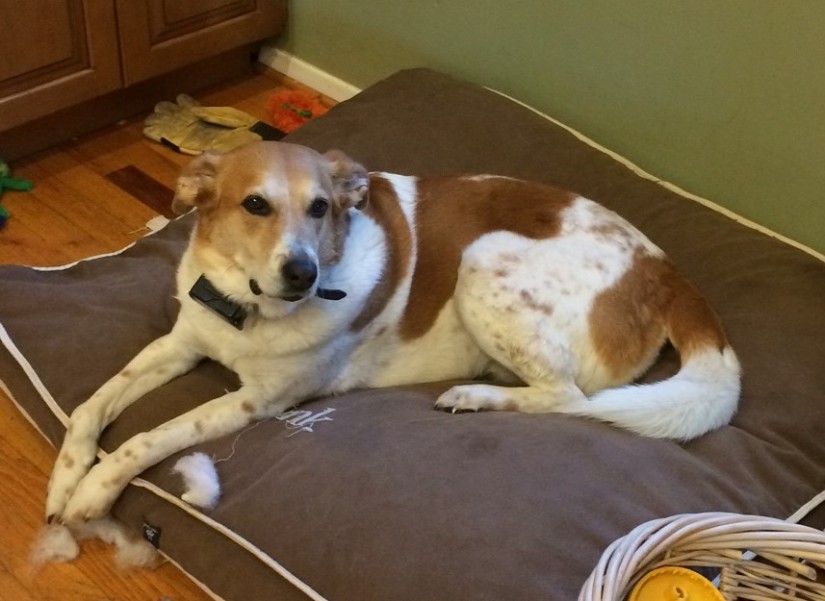 Upon meeting any new dog, Gracie’s assumption is that this animal is a lethal threat to her well-being (or at least the Frank bed). They are all horrible, until proven otherwise. Nevermind, that with very few exceptions, she has met the previous 95 dogs without issue.

I don’t know what we did to raise such a grumpy, unfriendly dog, but she feels the same way about the milkman, mailwoman, UPS driver, and any stranger who happens upon our doorstep. I have warned all my kids to within an inch of their lives, to put Gracie in her crate when people come to our door BEFORE opening the door. At least in Pennsylvania, the dangerous dog laws make keeping a dog that has bitten someone nearly impossible. Everyone in this house knows that if Gracie bites someone, and it’s reported, we’ll have to euthanize her. It’s a very real fear for me.

If you’ve met Gracie and experienced her bluster and her little chicken heart, maybe you (like my kids) can’t imagine Gracie biting anyone. I, however, know all too well, having stepped in the path of her lunge for the UPS guy and felt her teeth in my thigh.

When we adopted Gracie as a sweet little puppy, I had high hopes, but whether it was the state of my overwhelmed life or the capacity of Gracie’s wee little brain, none of them materialized. 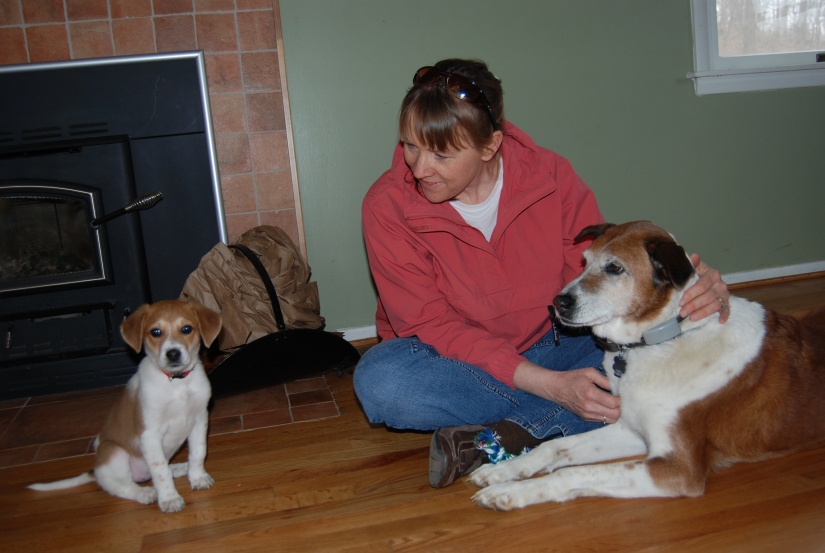 Gracie does not come when she is called. She does not stay within the confines of her invisible fence. She barks at the horses, the neighbors, the birds, every passing car, trees blowing in the wind, and everything her little mind can concoct. Which means she barks ALL DAY, and on the nights she runs through the invisible fence and then won’t come when she is called, ALL NIGHT.

I’m pretty certain my neighbors hate her with a vengeance. They probably run as many box fans as we do at night to muffle her sound. I do worry that some day one of them will reach a breaking point and shoot her. Seriously. They all have guns.

But back to Frankie. I’m trying to be incredibly intentional with Frankie so that he doesn’t grow up to be like Gracie. I never leave him alone with her. He sleeps in our room instead of in the crate next to Gracie. I want them to get along, but not bond. I don’t want him to in any way emulate her behavior.

I’ve been taking Frankie everywhere, introducing him to all kinds of people and other dogs. When the milkman comes, I take Frankie out on the porch to lick him (he also delivers grass-fed meats). When the Jehovah’s Witness women in their neat skirts showed up on the porch on Saturday, I took Frankie out to hear their pitch, so he could jump all over them and distract.

On Sunday we took Frankie to the Race Against Canine Cancer 5K. He’s too young to run, but he did cheer on the 130 dogs that ran with their people. He lapped up the attention and sniffed butts with dog after dog – all much bigger than him. He charmed the vendors in their booths and the organizers, as I handed out postcards about Gala in the hopes of finding an active person in need of a canine running buddy. 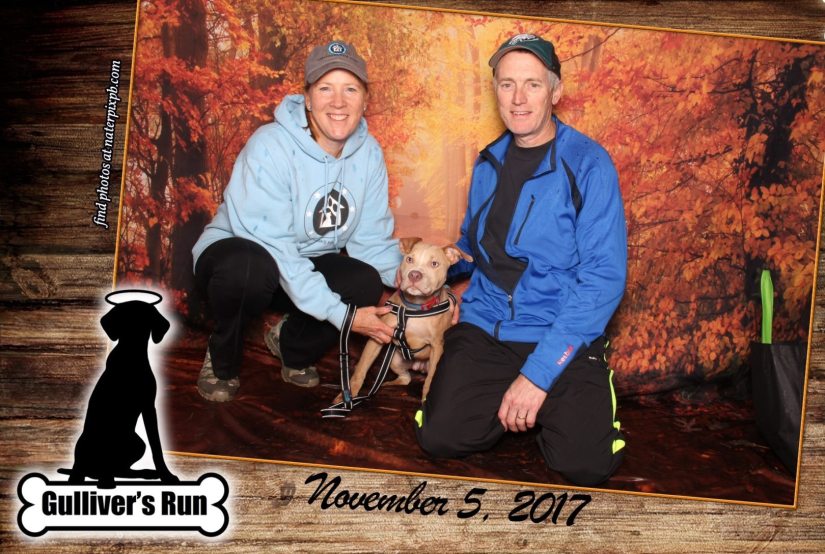 Frankie enjoys rides in my convertible, goes for baths at the pet shop, romps at the dogpark, and cheers Ian on at his soccer games. He’s learning to stay away from the horses and to be gentle with the cat. I have treats in my pockets at all times to reward good behavior (like coming when he’s called or walking away from the cat food). He’s already fearless in the face of the vacuum cleaner and Gracie’s snarls. He’s on his way to growing up to be a great dog. 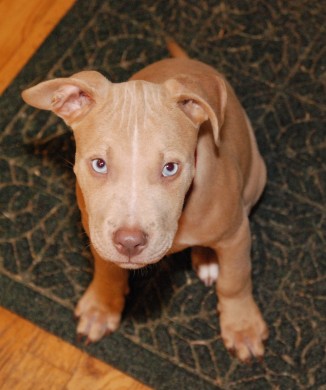 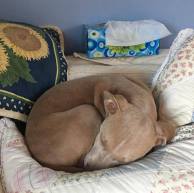 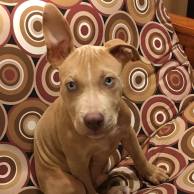 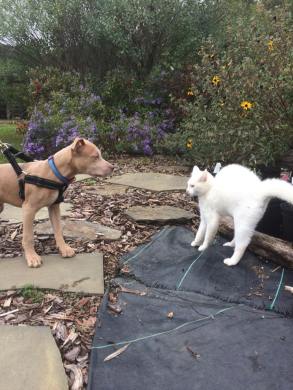 I watch him blossom and I feel guilty that we didn’t do enough for Gracie in her formative years. And probably we didn’t, but there are definitely some pups that are easier than others. Buford, for example, I seriously doubt he would challenge an invisible fence, and I’m quite certain he would do absolutely anything he was asked for a treat. And while Frankie sometimes hesitates, especially if there is a bowl of cat food nearby, Buford always comes running when I call. Had Grace had a little more Bufordness in her, I’d be writing a different story right now, but then again, I might have never turned to fostering either.

Ah, life, right? We all do the best we can, and when we know better, we do better.

This weekend, Nick and I are headed to Virginia for a couple days/nights hiking and wine tasting to celebrate our anniversary. We rented a little house with a fenced yard and a friendly dog policy, so of course, we’re taking Frankie and Buford. I’ll be sure to post pictures of their adventures on Another Good Dog facebook page.

NOTE: Buford’s official OPH name is actually Bronson. If you want to know more about adopting Bronson/Buford, Gala, or another of the other good dogs available, visit OPHRescue.org.

If you’d like to know more about my blogs and books, stop by CaraWrites.com.

If you’d like regular updates of foster dogs past and present (and Frankie, of course!), join the Another Good Dog facebook group.

10 thoughts on “What it Takes to Raise an Awesome Dog”