Monday morning Gala and I set off on a run, well, with my sore hamstring more a runnish.

We’d gone about a mile and ¼ when we came to a lone farm house that sits nearly on the road. Most of the old farmhouses in Pennsylvania do, since the roads are really paved cow paths and mail routes.

A young brown dog with a friendly face lives at this house chained in the side yard on a wire that allows him to nearly meet the road. On the days when he is outside early, he charges down the hill at us until the chain hangs him and his feet are yanked into a skidding stop. He barks ferociously, but his tail is usually wagging.

One time he was loose, about a year ago, he was still mostly a puppy. It was a rare day when I was running dogless. He leapt at me, nipping at my elbows, desperately wanting attention. I tried to pet him, but he dove at my face, most likely in the hopes of licking it. I continued on and he followed for a dozen yards or so before a voice from the porch called him back.

The dog is fullgrown now. A pitbull/bulldog mix of some sort – broad and squat and muscled with an enormous head. His regular charge always makes Gala nervous and she’ll bark back at him a time or two before pulling hard to get away from the house and his noise as we run past.

Monday, I heard the dog but didn’t see him as we approached the house. Odd, I thought, since by now he would usually be halfway down the short slope after us. We were nearly to the house when he came charging across the grass; a few inches of broken chain hung from his collar. I pulled Gala to the opposite side of the road, but he ran across the road after us, lunging at her. I yelled, she returned fire and he backed off, only to come at us again and again and again.

I yelled towards the house, “Come get your dog!” I could see lights on in the house and cars in the drive, I knew they were home, but no one appeared.

I looked around for a stick or something to keep the dog away so we could go, but every time I tried to move away, he charged at us and Gala defended me. This went on for what felt like an eternity. The dog charging, me yelling, Gala barking and defending. They’d get tangled up snapping at each other for a few moments, I’d pull Gala away, but the dog would only back away and charge again.

I was screaming so loudly, my voice was growing hoarse, and still no one came out of the house which sat only twenty feet away. Finally, I yelled, “Come get your dog or I’m going to call the police!”

I had my cell phone with me, but I don’t know how I could have dialed it while trying to manage Gala who was frantic.

A moment later, an older man appeared. He looked like many of the older men I encounter in our hollow—thin, bearded, yellow teeth, wearing an old t-shirt, blue jeans, with a chain hanging from a pocket.

Over the sound of the dogs, he yelled, “He won’t hurt you!” He was kind of laughing as he said it.

Adrenaline, emotion, I don’t know what, but I snapped. I’ll give you the PG version as best I can remember since my mind was black at that point.

He still didn’t catch his dog. The dog and Gala had stopped lunging at each other and were in a standoff.

He continued to assure me that the dog wouldn’t hurt me.

I screamed at him that he didn’t know that. I yelled that the dog was out of control and attacking my dog.

He yelled back that the dog wouldn’t hurt my dog.

I asserted again, colorfully, that he didn’t know that either.

I screamed at him to get a hold of his dog.

Finally, he caught the dog and held up the broken chain. Once again, he reminded me that his dog would never hurt me or my dog.

I told him that was clearly not the case and if the dog was loose again, I would call the dog warden. I told him that if his dog bit me, PA law says he’d have to destroy it. At which point, he told me I was saying that because I was afraid of pitbulls.

The man shook his head and yelled at me to go back to Baltimore (this is what all the native Pennsyltuckians say to ‘newcomers’ in our area). Then he said a few choice things about Gala.

Fury choked my words and I knew my tears weren’t far behind. I tried to yell something about not leaving his dog chained up, but we were yelling over each other at that point, neither of us caring what the other said. It occurred to me that like pretty much all my neighbors, this guy most likely had a gun. I began running. I didn’t look back.

I spent the rest of the run, trying to regain control of my emotions, trying to figure out why I had snapped so badly at this old man. Why had the entire scene rocked me so completely? It was another mile or two before I finally stopped shaking and crying and slowed to a walk.

Gala was fine. I was fine. The dog hadn’t hurt me or her, but I had screamed like a lunatic at an old man.

Maybe I went over the top because I was scared. Scared that Gala would have another misfortunate event – she seems to gather them to her like a magnet.

Maybe I overreacted because Frankie is going to grow up to look much like that dog. I love my dog beyond reason, but what will other people think when they see him? Will they be afraid? Will they assume he is dangerous?

By the time I got home, I wished so badly that I had handled the entire encounter better. I wish I had been able to calm myself down and talk rationally with that man. I wish I hadn’t let my emotions and my own assumptions take over. I wish I was a better grown up.

I briefly considered driving down there to knock on his door and talk to him like a rational human being.

I’ve done it before, I know I’m capable of it.

About five years ago, when his last dog, a large black lab mix, went after my mother-in-law while she was walking, I’d confronted him. I’d knocked on the door and told him what happened and asked him to keep his dog contained. He promised he would. He didn’t.

The dog came after me next, I fended him off with a stick and later drove down there again. I told him that while I didn’t want to, I would report him if the dog was loose again. I never saw the dog again. But I did hear a rumor that one of the teenagers who lived there was expelled from school for selling marijuana.

It was quiet down there for several years, until the little bulldog puppy appeared on the chain.

And here I am again.

I’m not sure I’m enough of a grown up to do it, but here’s what I would say to him if I had the chance:

I’m sorry I yelled at you. I was frightened for myself and for my dog.

I know you love your dog. I know you don’t believe your dog would hurt anyone, but your dog is an animal. This is his home and you are his people. To him, my dog and I are a threat. He’s only doing his job.

A wise vet once told me, “I don’t care how well you know him. An animal in pain or an animal that is afraid, is not your friend.”

If your dog is scared, you have no idea what he will do, please don’t tell me that you do.

Your dog is a pitbull mix, and through no fault of his own, that makes him a target for fear and misunderstanding. Fairly, or not, managing him badly could land him in the SPCA alongside the other several dozen pitbulls whose owners have not lived up to the affection they profess. It could also lead to his death.

You mentioned the ‘nasty collar’ I had on my dog. It’s called a prong collar. She was not wearing it because she is dangerous, she was wearing it because I’m teaching her not to pull on a leash and not to jump up on people when she’s excited. I want to be sure I can control her when I take her in public spaces.

I know you believe that your dog is secure, tied up on the side of your yard on a sturdy chain, but if you paid more attention to your dog, you would have realized long before today that his wire was close to snapping. I suppose it’s good that it was me and not a car that he was chasing today.

Because he’s a pit, I’m certain your dog is intelligent. He needs more stimulation and exercise than he can get chained up in your yard all alone. Take him for a walk or build him a fence so he can run freely (but make it high because pits are athletic).

You are responsible for this dog. You need to be sure he is safe, but more than that, you need to give him the life he deserves. If he’s harmless and loves people and other dogs, like you say, then take him to the new dog park, walk him on the rail trail, introduce him to dog friends or adopt him a buddy.

And by the way, I’m not from Baltimore, not that it matters or is any of your business.

Your neighbor who only wants to run quietly down our road and not have to fight for her or her dog’s life. 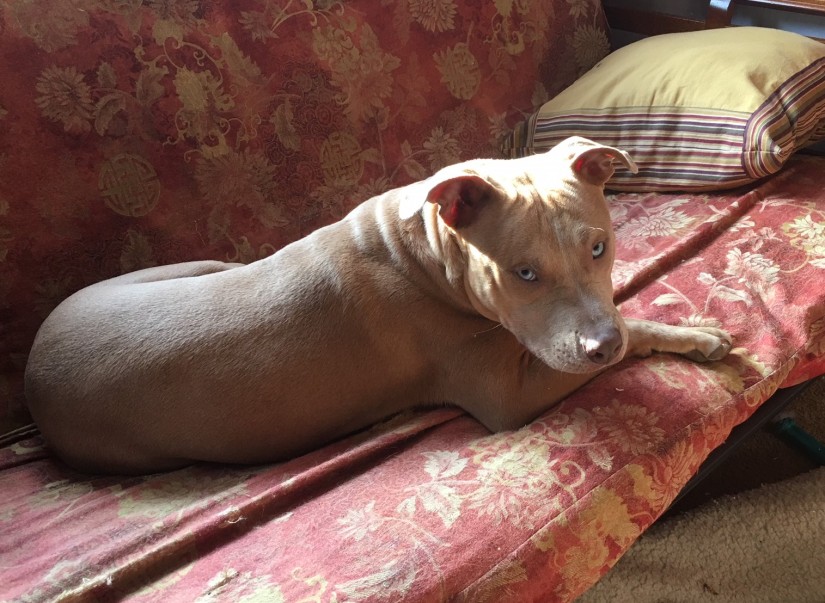 17 thoughts on “Open Letter to My Pitbull-Owning Neighbor”