I read the labels below the puppies in the puppy bowl bios and asked, “What’s an Amstaff?”

I thought maybe this was some new designer breed I’d never heard of, when in fact, my very own Amstaff was lying beside me. Or rather, at that particular moment, careening around Nancy’s living room. 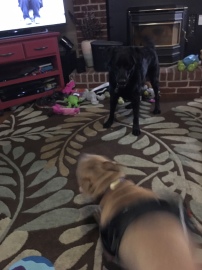 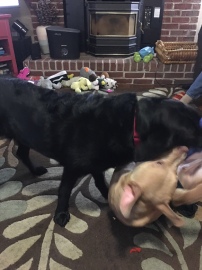 Frankie, Nick, and I watched the Puppy Bowl on Sunday with Nancy and Matt, who adopted Edith Wharton. While we sampled some excellent beers, Edith and Frankie wrestled and played with abandon. Frankie was thrilled to discover the huge cache of toys Edith had – many with squeakers intact! (There are very few of those at our house, as Gala considers it her job to keep the squeakers silent.)

We arrived just in the nick of time to see Frankie and Buford on the television. Unbeknownst to me, the pregame show started earlier than three, and Frankie and Buford turned up larger than lifesize around 2:40. (I apologize to any of you who had hoped to catch it. You can see it here. Forward to minute 30 and then wait through a batch of forced-commercials and you’ll see their segment.)

The game was fun to watch, but what was more fun was watching Frankie watch the game:

As the parade of Amstaffs went by on the screen, I understood quickly. American Staffordshire Terrier = Amstaff. Whether the name was shortened to fit on the screen or whether it is intentional rebranding, it has a certain ring to it. Now if only a name change could make people give this remarkable breed the respect and affection it deserves.

Normally, when we are out and about, which is quite often as I’m trying to socialize Frankie, people comment on his blue eyes and ask what breed he is.

Their eyes widen and someone always says, “You mean a pitbull?”

I’m tempted at that point to say, “Pitbull isn’t a breed,” but I keep my snarky comments to myself in the interest of allowing Frankie to change perceptions. I’m confident he has, and he will continue to.

On Saturday he participated in a program at our library we called K9&Kds (Canine and Kids) which builds on the Muttigrees program that OPH participates in, but focuses specifically on teaching children how to safely interact with dogs and also educates them about dog rescue. 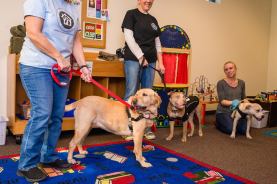 While the first part of the program was taking place (instruction, story time, crafts), we had to wait in an overly warm room for the kid-dog interaction time (it’s best to keep dogs out of sight when you want to keep children’s attention). Frankie was hot; we all were, but Frankie, being a boy dog, sprawled on his back, spread eagle, his maleness on full display. (For reasons, most likely biological, in the last few weeks his little nuggets seem to have doubled in size.)

I’ve noticed this particular lounging position is a mostly male dog habit. Not that girls don’t do it too, but it seems to be a default position for many of the male dogs and puppies I’ve fostered, starting nearly from birth. Note this PICTURE of Hemingway, the only boy puppy in Edith’s litter from last year. 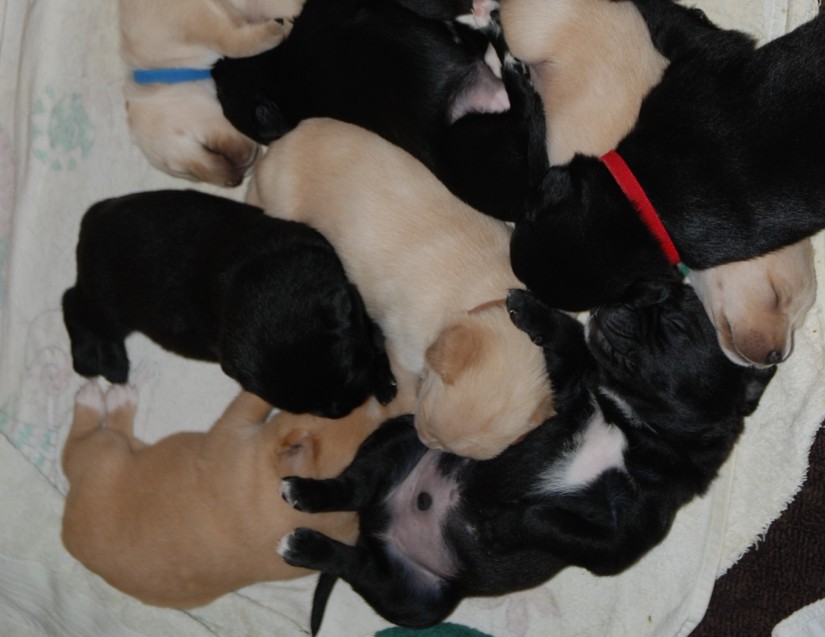 Anyway, Frankie was airing out and more than one volunteer gasped at the sight of his jewels. “I know,” I apologized, “They’re coming off on Wednesday.” One volunteer commented that she just never sees an intact dog anymore. Which is a great thing to hear. The mindset, at least of the library-frequenting folk, is different from the man I once heard say, in regards to his unneutered male dog, “I would never do that to him!”

How do we change that mindset? I have no answer for you, but World Spay (and Neuter) Day is a start. We need to be loud in our disapproval of unneutered/unspayed pets, and we need to be generous with resources to get the job done. OPH is sponsoring several World Spay Day clinics in the US and one in India.

I’m not naive enough to think spaying and neutering all the animals is possible, let alone, the answer, but it’s one thing that can make a difference. I love puppies, in fact, I’m counting the days until I can welcome another precious tribe to my house, but I wish there would be no need of me and my puppy room.

Tomorrow morning early, I’ll drive my little Amstaff to the vet clinic and change the course of his life for the better. Because there’s really only one Frankie, and I’d like to keep it that way.

14 thoughts on “My One and Only Amstaff”