Okay, I’ve been sitting on this news for months! Literally! But now I just have to tell you. Frankie (and Buford – remember him?) are going to be on national television THIS SUNDAY as part of the pre-game show for the Puppy Bowl on Animal Planet!

It’s been a dream of mine that one of my puppies be chosen to be in the Puppy Bowl and while Frankie isn’t in the Puppy Bowl, he’s part of the pregame show. There are a bunch of other OPH puppies in the actual bowl, including Cotton who is in the starting line up. Timing and schedules prevented Frankie from making the actual game, but a few weeks after the game was taped (don’t tell – pretend you think it’s live!), Animal Planet needed a few more puppies to liven up the pregame show. Frankie, Buford, and three other OPH puppies spent a day at the studios.

The puppies were treated like celebrities and there was even an Animal Humane Certified Animal Safety Representative to monitor everything and be sure the pups were treated humanely. We lounged around in a sunny space equipped with puppy pens, puppy pads, water, treats, and toys for the puppies, and plenty of snacks and drinks for their human handlers. A steady stream of beautiful-young-people-who-work-in-television stopped by to cuddle them and take selfies while they waited for their cue to join the actors on set. 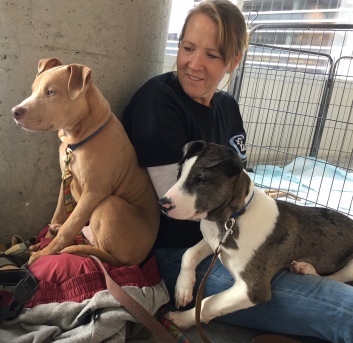 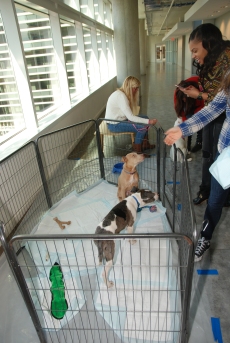 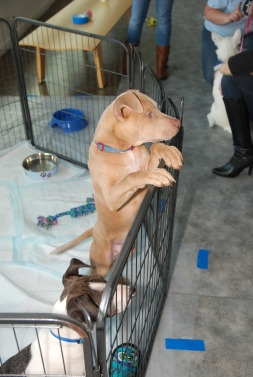 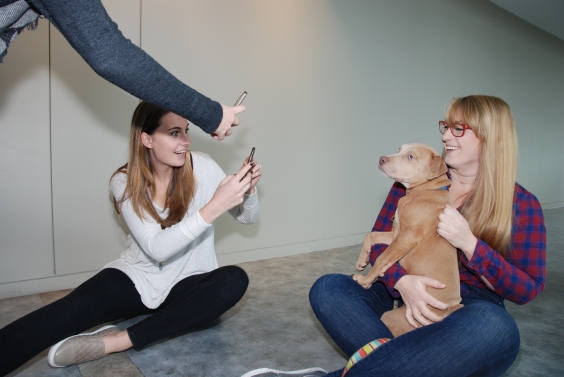 Frankie, Buford, and Crystal (an OPH alumni puppy who is gorgeous and deaf) were chosen to be the ‘desk puppies’. Two other OPH puppies, Cider and Brody were the ‘field puppies’.

From best I can tell (I wasn’t in the studio for the filming of this part), the field puppies ran and played in front of green screen to demonstrate puppy bowl ‘plays.’

When it was time to shoot the Desk Puppies, Frankie, Buford, and Crystal were invited onto the set where three commentators sat at a desk just like the boring part before any televised football game. The actors recapped previous puppy bowls. This task was made more challenging by the puppies sitting (in theory) in front of them on the desk.

Buford warmed to his task and snuggled his commentator in true Buford fashion. He leaned on her silently and stole her heart. Crystal was a bit wiggly, but she kept to her side of the desk (which was good because she’d been growling at Frankies overtures all morning). Frankie sat in front of the center commentator. (As his mom, I thought that made him the star of the show.) He sat nicely at first, but then grew bored of the repeated takes, and began visiting with the other commentators. At one point, his commentator was trying to do a wrap up with Frankie’s wagging butt in front of his face. Being the professional, he keeps talking but everyone in the studio was definitely enjoying that take. 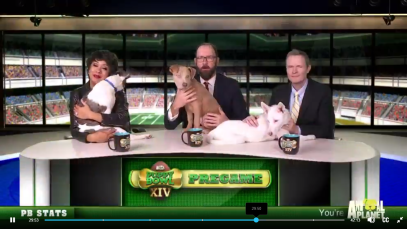 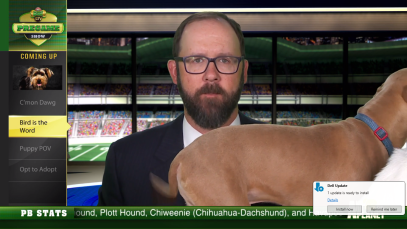 I know you can’t wait to watch the Eagles crush the Patriots, but if you’ve never tuned in for the Puppy Bowl, don’t miss it. It’s always a heartwarming and fun show, raising awareness for dog rescue. It starts at 3pm THIS SUNDAY Feb 4 on Animal Planet.

The pregame show is already live online, but will air again on Sunday. (If you pull it up online, Frankie, Buford, and Crystal come in around minute 30.) But tune in early on Sunday and you’ll catch Frankie’s five one minute of fame on the big screen. His scene comes just before the National Anthem.

OPH is sponsoring two Viewing parties and dogs are welcome. Join us in Virginia or in Maryland. These are OPH fundraising events at local breweries which makes them a win-win-win (puppies-good cause-beer!).

Frankie has a date with Edith Wharton to watch the game up here in PA. My guess is the two of them will be too busy playing and miss the whole thing, but that’s how stars are you know, taking their greatness for granted. I don’t think his new-found fame will change him one bit.