This last week has been a tough one. Just like my beautiful tulips that were bright and healthy a few days ago and now droop and struggle in the below freezing temperatures, the puppies’ story changed drastically this week.

Below are the entries from our week in rescue. If you’d like to read them in real-time, you can follow the daily diary on my Facebook page, Cara Sue Achterberg, writer.

I’m a little worried about Usnavi. He hasn’t been himself and has stopped gaining weight. No other symptoms yet- no fever, no cough, he’s eating.

Yesterday I decided to start supplementing his meals with puppy formula. He’s tiny and there aren’t enough seats at the milk bar so could be he’s just not getting his share.

I’m pretty sure that Mia (and consequently these pups) are full of worms. It’s still too soon for the big gun dewormers, so worms may also be the issue with Usnavi. 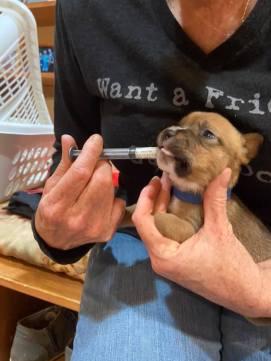 Solid food! Well, mushy solid food. Almost all of the puppies loved it. Some of them preferred to eat it off the faces of their siblings. Usnavi and Pippin, who are both not gaining weight had an early seating so they had a head start. Now that they are getting solid food I’m hopeful that they will begin to gain again.

The additional food plus a new stronger dewormer this week will hopefully get them all looking healthier. They just aren’t roly-poly like I pups usually are. They have defined backbones and pot bellies so I’m guessing worms are the culprit.

We’ll get them right. Worms are a battle with all puppies.

I’m hoping to do a live stream puppy hour tomorrow- so watch for it! I’m going to pick a time when they are active.

Happy Easter to those that celebrate- this is by far the strangest Easter ever. I am planning an egg hunt for my big kids and we’ll be cooking seafood since we couldn’t find a ham! 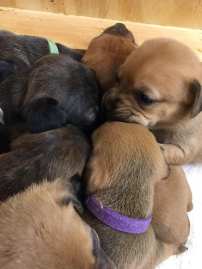 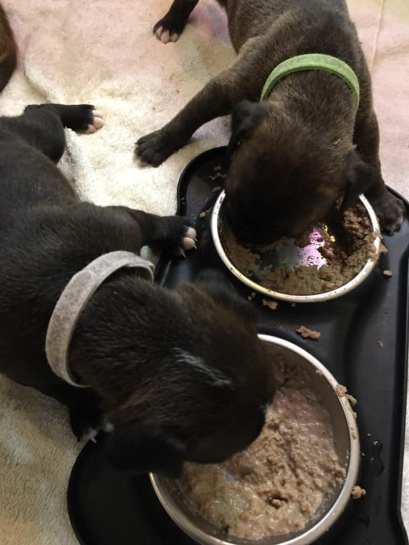 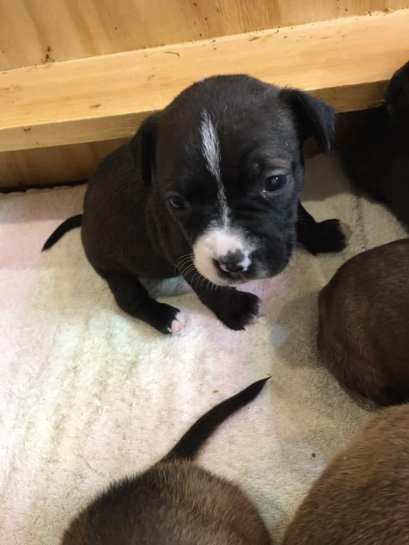 I apologize for not posting a diary entry yesterday, but things in the puppy pen began to plummet in the afternoon. Even with the introduction of solid food, most of the puppies are not gaining weight anymore. Seven of ten have either stayed the same or lost weight, and two had become dangerously fragile.

I tried repeatedly to supplement the weaker puppies all afternoon and evening with formula, but they had little interest. Early this morning, Elphaba died. I found her with her mother in Mia’s dog bed this morning. I don’t know if Mia knew she was dying and carried her there or was trying to feed her.

Pippin’ does not look good and Usnavi seems okay but is still losing weight. I dewormed all the puppies right after I found Elphaba deciding that the risks outweighed the benefit of waiting any longer. The puppies who are struggling all have pronounced back and hip bones and round, hard bellies, which to me, combined with Mia’s lack of weight gain despite copious amounts of food, means worms.

We are headed to the vet this afternoon at 2:30. Taking a litter this young to the vet frightens me, but losing another puppy frightens me more. This has begun to feel like a battle against an invisible enemy.

Fostering pregnant dogs and litters who have not had quality prenatal care, really the reverse of that, means that we do lose puppies, but this time stings worse than others because they were all doing so well. They will be four weeks old on Tuesday and I would have thought we’d be out of the woods by now instead of just going into it.

#rescueisreal #praying for these puppies 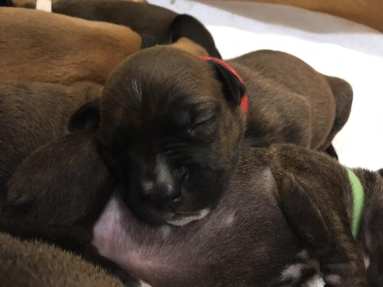 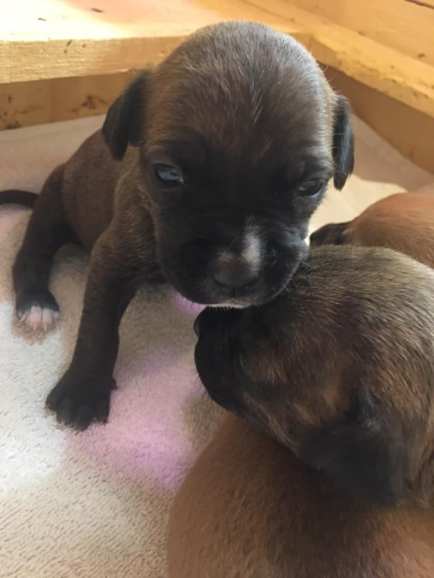 After three hours at the vet, we have our diagnosis and a plan. The puppies (and Mia) are infested with hookworms. If you know anything about hookworms, you know they are lethal.

Even though I dewormed them this morning, as long as they are nursing and Mia is cleaning them, the cycle can’t be broken and they will be reinfested again and again. As the hookworms advanced thru their stages, the pups have become more and more anemic, which explains how on Sunday they became like wind up toys winding down.

All of them have dangerously low red blood cell counts. In a bigger dog, a blood transfusion would be needed, but they are just too small. Pippin and Usnavi are so low that the next day or two will tell whether they will survive.

To save them all, we had to take them from their mama. So now the burden is on me (and whatever family I can enlist) to get them fed round the clock.

Some had begun eating solid food, which helps but all of them will have to get on board with puppy mush, plus drinking their formula. They got a B12 shot today and will start on iron supplements (super yuck!). We will aggressively deworm them through the next few weeks.

And we will hope.

The vet said, “You’ve done everything you can do for them, now we will just see.”

Rescue is never predictable. These puppies would have definitely died in a shelter, Mia too, if the hookworms were left untreated. This is hard but this is the best we can do. We can give them this chance.

We could use your prayers and good energy going forward. I’m hopeful and ready to do what we need to do. 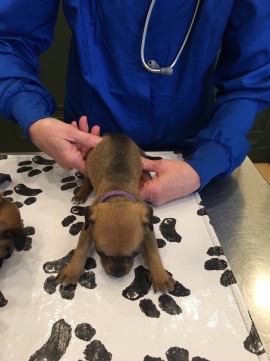 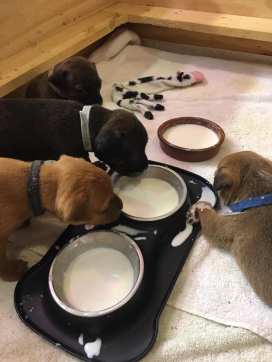 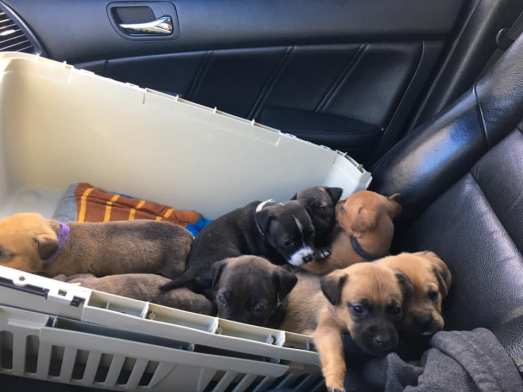 We made it through the night. In fact, I almost posted at 3am when Pippin finally drank formula from a bowl. Up until that point, the only thing I was getting in her was what I syringed into her mouth (well the tiny amounts she didn’t let fall right out). I’ve decided to interpret her stubborn resistance to being made to eat as strong will, which will bode well in the days to come.

Most of them have taken to the mush well. The weaker pups (Usnavi, Pippin, Millie, & Cinderella) are not yet interested in mush but are lapping up the formula fairly well. Sometimes they need a jump start with the syringe.

Mia is sad and sore. It’s hard to stop nursing abruptly, but her milk supply wasn’t very plentiful, likely to the fact that she was also fighting off the hookworms, so as of now she is full but no signs of mastitis. We are taking frequent slow walks around the pasture.

I’m not used to such a subdued version of Mia. It is hardest for her when she hears the pups playing it crying. If the temperatures would warm up I would move her crate to the garage but for now we are dealing with her whines (as is everyone on Nick’s conference calls).

We’ve had a great day. Everyone is finally eating independently! They eat their main meals in shifts of three and I leave kibble and water out all the time.

Just checked weights and everyone gained weight except Evan, but he held his own. Usnavi made it to two pounds and Mr M and Dolly topped three pounds! Most importantly, Pippin gained two ounces. Big sigh of relief here.

They are sleeping a lot but getting more and more active and interactive which you’ll see in the video. Pippin tires easily but that’s to be expected as her numbers were so low. She is eating well and even playing with the others and tonight for the first time, she played with a toy.

The iron supplements perk them up each afternoon. Tomorrow right after breakfast they will get another deworming and hopefully that will get anything that was left from Monday’s deworming and the new ones just starting. We will win this, I am confident. And then they have a lot of catching up to do.

Thanks for all the support and messages – it makes me feel much less alone, even if I am.

Please be safe and take care of each other!

After a day of nonstop crying, Mia left for another foster home tonight. I’m so grateful to Katie for volunteering to take her.

The last three days have been incredibly hard on Mia- physically and emotionally. As the pups have gained strength and ‘come back to life’ they are getting noisier which has been torment for Mia. I am sad that I won’t get to see her through but so glad that she can now start truly healing.

The pups are active and growing plump. Even Pippin continues to gain although she still tires easily and sleeps most of the day. They are enjoying toys now and whenever they catch sight or sound of me the begin a chorus of whining for attention. I really wish I had nine arms! 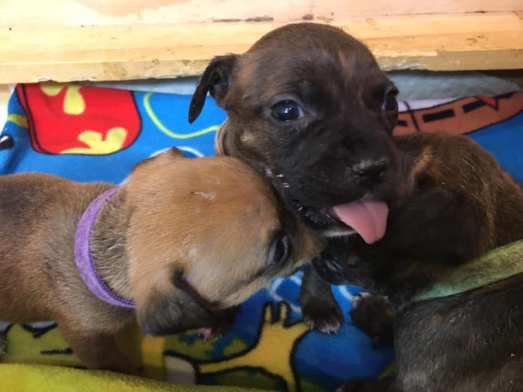 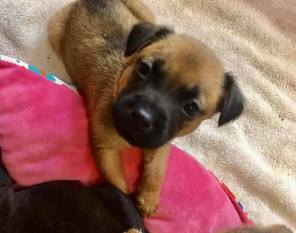 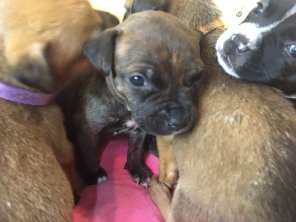 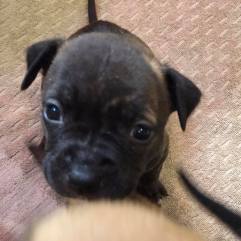 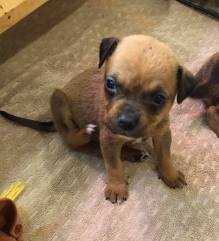 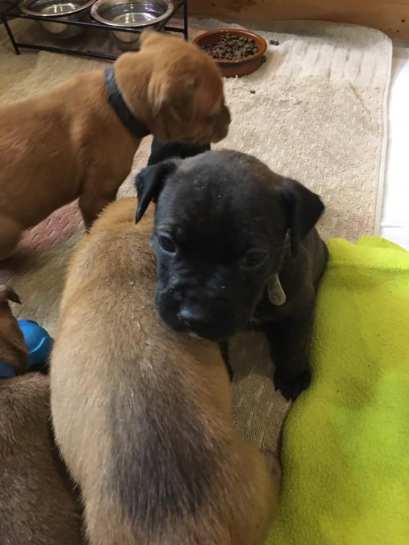 If you’d like regular updates of all my foster dogs past and present, plus occasional dog care/training tips from OPH training, be sure to join the Facebook group, Another Good Dog. 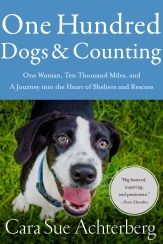 For information on me, my writing, and books, visit CaraWrites.com. I have a new book, One Hundred Dogs and Counting: One  Woman, Ten Thousand Miles, and a Journey into the Heart of Shelters and Rescues, coming out in July. If it sounds like something you’d like to read, I’d be beyond grateful if you’d consider preordering it. Preorders contribute to the success of the book, not only giving me and my publisher some peace of mind but hopefully attracting media attention.

If you can’t get enough foster dog stories, check out my book: Another Good Dog: One Family and Fifty Foster Dogs . It’s available anywhere books are sold.

9 thoughts on “Diary of a Rescue Week Three: A Tough Development”