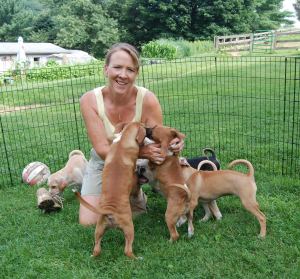 It’s going to be a tough week. For all of us. The first pups take off on Monday. Lug Nut and Jillie Bean will be relatively local, so their adopters will be able to come for them. Marzle leaves on Tuesday evening.

There will be some serious howling in the puppy pen. I know this because when I take just one pup out for a bit, everyone else cries. They’ve never been apart in their short lives, so even when it’s a separation of only a few feet, they are devastated.

I’ve been trying to help them get used to being on their own, so I take each out for a solitary adventure most days– a walk up the hill to gawk at the chickens, a snuggle in the hammock (only Boz and Lug Nut can be still enough to enjoy this), a visit to the gardens to pull a few weeds, a little time in the kitchen with me while I prepare a meal, or a half hour spent on Ian’s lap watching him play computer games.

It didn’t take long for them to enjoy the attention and forget about their siblings. They don’t rush back to the pen (except Jillie, she usually is happiest to get back). But the ones left behind – it’s a sorry sound. The howling and crying are heartbreaking.

They’ve gotten much bigger in the past two weeks, and their pen, which seemed vast at first, seems overstuffed. They shift it around while wrestling and I never know what configuration it will be in or which object they will have pulled partially through the walls (trash bag liner, coat that wasn’t hung up, pile of newspaper).

When I have the time and the help, I take them out for a tear around the screened-in porch. They love this. I thought at first I would take my laptop out there and work while they played, but that was a silly idea and I got nothing done. Their cuteness and antics were just too distracting.

(That was just three of them)

They love playing tag and launching themselves off the chaise lounge (whose pillows we had to remove so they wouldn’t be eaten – beware adopters!). It’s like the diving board at the pool in summer. 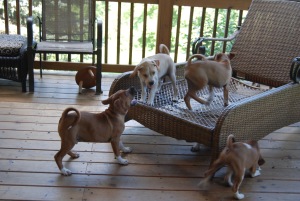 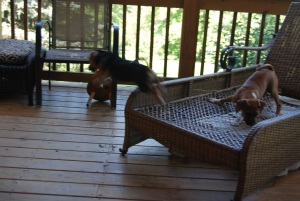 This weekend, we hooked up our puppy pen with our neighbors borrowed pen and created a little paddock in the grass. Wow, was that crazy fun. Marzle discovered digging! So now I have to be careful going out to close the chicken house in the dark so I don’t sprain an ankle. The birds provided endless entertainment and whenever a ruckus broke out in the chicken pen it silenced the puppy pen. They froze in awe – what is that amazing sound? And sticks – they all loved sticks – best free toy on earth. 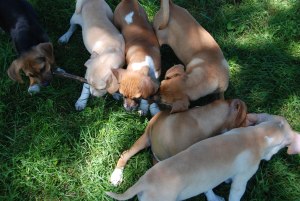 It was a gorgeous afternoon, so I kept them outside for a few hours. 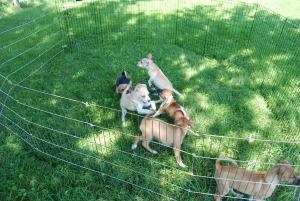 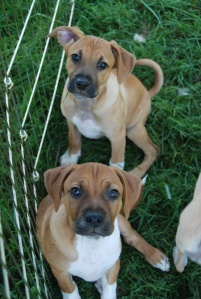 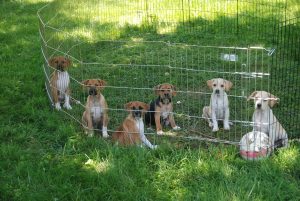 When I finally brought them in, they were as tired as I’ve ever seen them. Almost slept through dinner. But it was the first peaceful evening in days. Now that they’ve discovered the big wide world, they simply do not want to be confined to their pen and begin whining and whimpering as soon as anyone is within ear shot. I have to sneak past their doorway in socks.

Tomorrow the good byes begin. I know it will be as hard on them as it is on me. Homeboy, Boz, and Chick Pea will be with me until Saturday, which is good and bad. Good because six more days of puppy kisses, but bad because it will only make it harder for all of us.