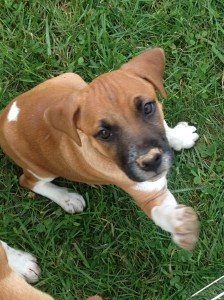 Homegirl is still with us. Hopefully, she will go home at the end of this week. Her almost-adopter made the very responsible and difficult decision not to adopt her at the last moment. I have to take a sidebar from this post to comment on this:

Deciding to adopt a puppy or dog is a BIG decision. It’s not something you should make on a whim or simply because a particular canine is irresistible or because you fear no one else will take this dog. It’s a 10-15 or more year commitment. It should not be entered in to lightly – for your sake or the dog’s sake.

When things don’t work out, as in the case of our beloved Carla who was responsibly owner-surrendered after four years, it breaks a lot of hearts. I can only speak from the dog’s side (although having gotten to know Carla, I am certain there were plenty of tears on the other end, too). Carla mourned for nearly a month. She was lost and sad, and while her story ended well, I’m sure she is more cautious in ladling out her trust in her new home and won’t feel completely secure there for some time.

Maybe I’m anthropomorphizing a bit, but I do know she had a tender soul, like most dogs, and being returned is devastating for all involved. So…..I am very happy that Homegirl’s potential adopter was smart enough to wait for the right dog for him. 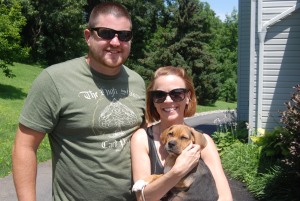 When the next to last puppy to go, Boz, left on Saturday for Pittsburgh with his happy, fun new family, Homegirl was a little worried. She didn’t say much, just watched out the window. She’d had a few experiences all alone, but every other time she was eventually reunited with some or all of her siblings, so she didn’t start really crying for about an hour.

Nick and I were headed out of town for a quick getaway (less than 24 hours!) to celebrate his birthday (which was last December but life gets in the way and our beer tour of Lancaster got postponed repeatedly until it finally happened this weekend. Funny aside – when we arrived at our hotel, there were Christmas decorations everywhere. Since Nick’s birthday is 3 days after Christmas this seemed appropriate, but no, it wasn’t clever me, it was the Christmas In July convention. The hotel was inundated with Santa look-alikes, insanely sweet and pleasant mid-westerners, and curious people carrying small ugly artificial Christmas trees – presumably all owners or sellers of Christmas decorations.) 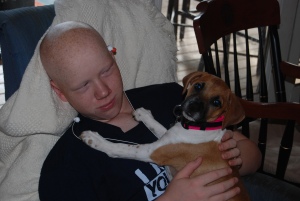 Our absence left my 13-year-old son, Ian, in charge of Homegirl and her sadness. Reportedly, she whined so much that he was forced to carry her, hold her, walk her, and play with her until he couldn’t keep his eyes open anymore, and then he left her with his 18-year-old brother who was wearing headphones. When we got home the next day, Ian greeted us with Homegirl in his arms and handed her over saying, “Now you can listen to her.”

It’s hard to lose your family, but she is recovering (as I hope all the puppies are). We’ve moved her into the kitchen by adding this barricade.

This way, she almost always has company, which is what she wants most. It also means that you need to be atleast 5’7” and/or very limber to enter our kitchen from the living room. She’s getting plenty of runaround time outside, though she is captivated into stillness by the presence of the horses, and makes excellent company in the garden, preventing me from working too hard or accomplishing too much. I’m trying to give her a headstart on the housetraining, so we go for “walks” frequently and she’s learned to pee for treats. 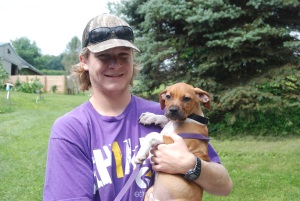 Lug Nut (now Harper – I’m thinking this is a tribute to a certain famous author and a long awaited book that was finally released this month), was the first to take off this past week. His new adopter lives only 15 minutes away, so he arrived shortly after the much delayed worming. Lug Nut looked only slightly concerned, which is his default look anyway.

Jillie Bean (now just Jillie, kind of like just Jack) was the second one to be gathered up by her adoring parents and whisked away.

I was super excited that they kept her name, as she was named after an amazing young person who is one of my favorite kids-I-camp-with.

Marzle (now Tyson) has moved to VA for now, but has roots in Pittsburgh only a few miles from a dear friend of mine, so I hold out hope that I may see him again someday. I can’t wait to see how big he gets. I’m thinking Tyson will be a more than appropriate name! I’ve already gotten some pics of him on his first visit to Pittsburgh and he looks more than happy. 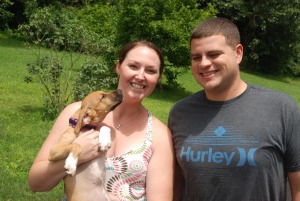 Chick Pea (now Payton) moved to the water. She’ll be living in southern Maryland on the Chesapeake. She’s built for this life and hopefully her Lab heritage will prevail and she’ll be chasing ducks and Frisbees in no time. She did manage to jump out of the puppy pen from a standstill the day before she left, so it’s clear that her athleticism will take her far (but hopefully not too far).

Surprisingly, it was Boz, and not Chick Pea (my almost foster-fail), who reduced me to tears. I made a point of saying goodbye to all my pups shortly before their new mommies and daddies arrived so that I wouldn’t be a sniveling mess when they departed. When the adopters arrived, I focused on paperwork and puppy-warnings and taking a nice picture of each instead of the fact that I would most likely never see my little babies again.

But when Boz was being loaded up, the lump in my throat gave way. I’m teary now, just remembering the little snuffly sounds he made each time I rescued him from the puppy pen and he burrowed into my shoulder in relief. Love that little guy.

Fostering is a lot of great things, but it’s not easy. It is tough on one’s heart. That’s all I’m going to say about that.

1 thought on “And Then There Was One…”