My days are still blurring together on this publishing roller coaster, but Frank is steady as can be. He did prove that he is a real dog and not the Super Dog I thought him to be…..

He rolled in horse manure. Covered himself in it actually. Proving himself to be a true dog. Fun times.

And then a group of deer ran across the road in front of us and he scrambled to the end of his leash in a hurry to join that parade as opposed to staying with me on our happy run. I’m relieved to say that all these years of running with Gracie have prepared me to hold tight while a dog levitates at a full-run (ala Wylie Coyote) on the end of my retractable leash.

So, yes, Frank is mortal. Sigh. He’s still my favorite dog ever, though.

6am wake up call. He waits patiently in his crate, thumping his tale against the wire sides, occasionally emitting a high pitch whine that you would swear couldn’t possibly have come from him.

6:15am we are on the road for our run/walk/stop to pee on everything. I’ve stopped wearing headphones so that I can hear when a car approaches and reel in Frank. He knows nothing of cars and runs towards them in greeting. His new adopters will need to be wary of this odd behavior. Luckily, cars are few and far between on our country roads….

Back at the house, he waits somewhat patiently (I can’t say because I’m not there and no one else is awake) while I tend to horses and chickens. I can’t bring him with me because he would most definitely eat a chicken for breakfast and I worry one of the horses might inadvertently step on his friendly self. This morning, he passed the time by chewing up an umbrella carelessly left next to the door. (Of course it was my daughter’s favorite umbrella that she bought in NYC for her birthday….here’s hoping Amazon carries clear umbrellas with pictures of high heels on them.) 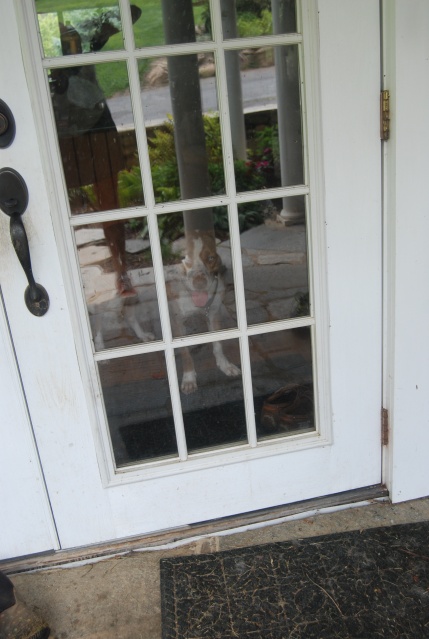 Breakfast time! Definitely one of Frank’s favorite parts of his day. The meal goes by so fast, there’s not time for a picture. The next hour or so, he trails me all over the property.

Helping me harvest (a little late grabbing these guys, I know)

Keeping a vigilant eye on the chickens…. 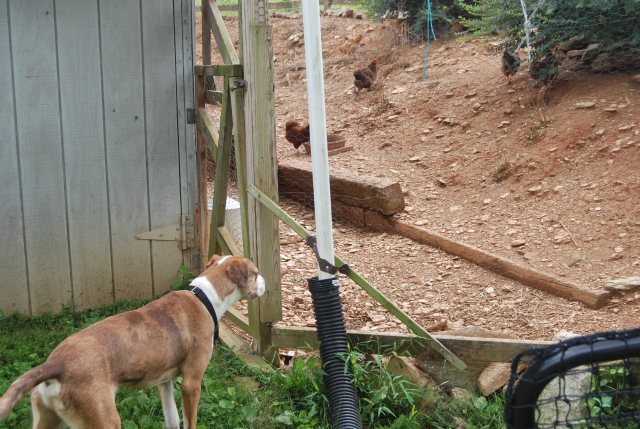 Back in the house, he settles in on his futon (covered with an area rug to protect it) with the rest of my audience and watches me work…. 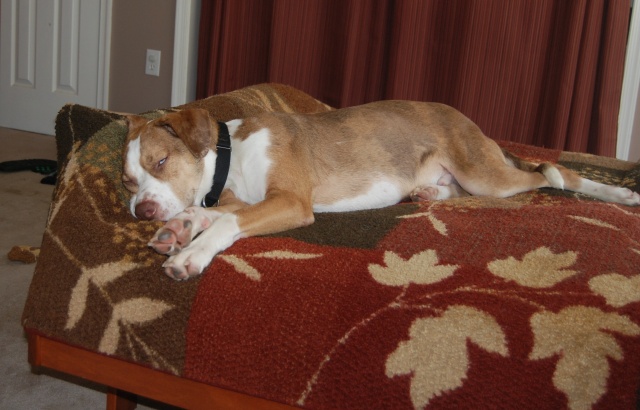 It’s pretty boring, but he sticks with me, following me upstairs to change the laundry, out to the line, back to the kitchen for another cup of tea and then back to the computer again.

Sometimes when I hang out laundry, he and Gracie have a “tear around” taking turns chasing each other until it ends because Gracie grows annoyed and snaps at him, or Frank runs out of steam.

Later, when I catch up on a phone call, he joins Gracie for a nap on the porch….

That’s pretty much the sum total of his day. Being a herder, he does sometimes check in to see where other members of the family are….

In this next picture, he’s supervising Nick as he helps me can tomatoes (he’s using our new wonder tool, the victorio strainer, which makes this job WAY easier)… 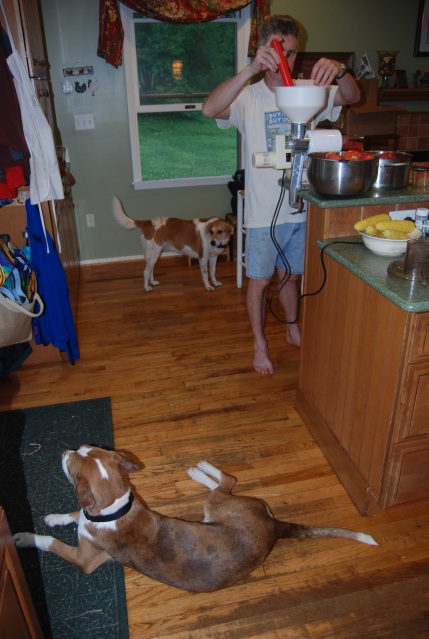 He always visits with the cats that lounge on our porch whenever he is coming or going. They have grown accustomed to his snuffly greetings and attempted to teach him a little about personal space.

He keeps his distance from the horses when we stop in to top off water buckets or give them more hay….

Brady is generally absent, but he likes Frank very much.( I have yet to tell him that Frank ate one of his camo Crocs.) Addie calls Frank “Dog” (you have to use the teen annoyed voice when you say it) and generally shoves him aside when he approaches, which he does often because he hasn’t given up on his quest to win her over and still licks her legs when the opportunity presents itself.

So, as you can see, Frank’s days are full, but they are also numbered. So I would appreciate a little positive energy sent my way as I say good bye to him this Saturday and he begins his real life with his forever family who are ready to spoil him all the rest of his days.

Nick keeps saying, “I can’t believe you’re going to give up this dog.” And I tell him the only reason I can is because he’s going to such an amazing home. They will love him even more than I have. Margarita has sent me lengthy emails sharing their excitement and preparations and I know already how good Frank will have it. I’m excited for him, even as it breaks my heart once again.

Fostering doesn’t get easier, but helping another good dog is its own reward.