But she doesn’t count.

Okay, that’s not fair. She counts, but she already has her forever home, for better or for worse, so no worries over her.

This week I said good bye to three dogs. I think I’m getting better at this, because instead of being a wiggly-hearted sap, I was excited for my dogs – proud of them and so very happy for the families that lucked into these good dogs.

Frank was the first to go. And the hardest. I still miss his wide soft head, always there, right next to me at the perfect height for petting. I worried and fretted and second-guessed myself, but in the end it was the right home for him. 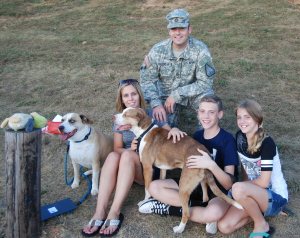 When we met his family for the ‘Meet and Greet’ (the OPH term for the time when the adopter meets the foster dog and makes the decision to take the dog home or not), Frank was very relaxed. He bounded out of the car and introduced himself to his new big brother (who has matching blue eyes!) and they liked each other immediately. Frank wandered around smiling and wagging up everyone, gobbling up the offered treats (and then casing the bag for more). As always, he gravitated to the kids, but seemed equally enamored of his new mom and dad who obviously adored him.

Happy moment for them, lump-in-throat moment for me, but no tears because I knew this was the right move for Frank. With a new best buddy to play with and two kids to adore, Frank would be happy and busy. Plus, his new mom works from home, so she’s there to keep him company. The whole family had such a happy, easy energy, any dog would be lucky to go home with them, so I was thrilled that Frank was the one.

Still, I held my breath until I got the email from his new mom the next day. He was settling in great. He and Cole had played happily for hours. Yay for Frank, my favorite boy. His giant bed is still here. We decided to keep it, partly because it’s a great bed for multiple dogs to share and it reminds me of my favorite foster dog, and partly because I didn’t want his new family to feel obligated to keep his name. Most adopters change the foster dog’s name, which is appropriate because it’s the beginning of a new life. Frank is now Cooper. 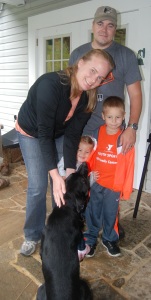 Tennessee left amid the momentary monsoon that happened on Saturday. His family had met him at an OPH event a week or so ago, so they knew they wanted him. His M&G was quick. He was over-the-moon excited to have his very own little kids and really floored me with the way he dialed back the energy when he loved on the little one, careful not to knock her over. His dad texted me later and said that “Black Jack” (perfect name) had found his forever family. Yup. Tears. We’ve been through so much with Tenn these last few weeks and he deserved the best, so they were only tears of joy. Miss him, even his constant wet nose on my leg.

Tweety was our fly-by-night foster. I picked her up at an OPH event Saturday after she had been sprung from boarding. OPH pays to board some dogs who are highly adoptable but haven’t got a foster home. She’d been in the boarding facility for a week and had obviously been a favorite. One of the workers sent along a giant bone and a stuffed animal for her to keep. She was also wearing two collars, one with a blingy gold tag. While we only had a few hours with her really, it was easy to see why everyone doted on her. What a doll baby.

She’d only been in the house an hour when I had an email to set up her Meet and Greet for the next day. It was hard to tell the new adopters anything about her. I took her out between the raindrops and tried to get to know her, snapped a few bad pictures, and then introduced her to the cats who were as equally apathetic about her as she was about them. The only thing I could really tell them about her was that she was overweight (the first foster dog I’ve met that was actually fat!) and that she pulled on the leash. That’s it. Other than that, pretty darn near perfect. Happy to go in crate, happy to come when called, very happy to eat, happy to go outside to do her business. Nick said she was the dictionary dog – the dog you picture if you’re describing the quintessential dog. She reminded me of the Far-side dogs with her square body, little head, and curvy tail.

The M&G was super easy because, heck, what’s not to like about this dog? She headed home to Virginia less than 24 hours after she’d arrived here.

So now we’re dogless until Friday’s transport when we will be receiving the promised “purse size” dog that my daughter has asked for since we started this craziness. He’s a five pound, 10-week-old Chihuahua mix named Sprout. Super cute.

But because I tend to miss the point of these tiny dogs, I’m thinking of also fostering a real dog (something a little larger than a rodent). Still hemming and hawing and studying the list. After the multi-dog craziness of the past month, I just can’t imagine having only Gracie and a puppy that’s half the size of the cats. Stay tuned. You know I’ll cave.