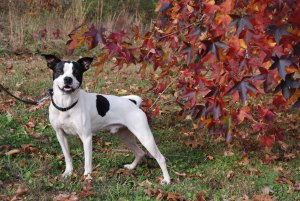 John Coffey is quite the dog. It took me awhile to figure out what to call him. Originally we thought we’d go with ‘JC’ since he looks like such a slick character, but upon meeting him and spending some time with him we decided he’s WAY too puppy for such a laid back name.

We picked up this newest foster dog from another OPH foster on our way home from Virginia. (Sigh. So wish we were still on vacation – the wine, the weather, the oysters were all wonderful. If I hadn’t done a face plant during our first hike it would have all been perfect.)

Livia and Nick told us they’d been calling this little guy, ‘Coffey.’ He was one squirming bundle of happiness. It comes out his pores, I believe. He can’t wag fast enough to express his joy and emits tiny little whimpers of ecstasy when you pet him. This dog just wants to be LOVED.

We had no room in our car for a crate (we brought home five cases of wine – who’s up for a little happy hour?), so John Coffey was given a section of the back seat. That just would not do, not when there were TWO people less than an arm’s length away who could be petting him. He rode the entire hour and a half posed like a hood ornament on the console between our seats, alternately licking a face or nuzzling a shoulder.

When we got him home, we discovered that the energy does not dissipate. In fact, it seemed to increase. Luckily, he has smarts in equal measure to his energy and is SO eager to please that he’s a quick study. Currently, we’re working on the not-jumping-on-everyone-at-all-times trick. I’ve decided that his full name fits him, as in “John Coffey get down. John Coffey that’s enough. John Coffey DOWN.” He’s like a small child whose mother uses his full name when she means it. And so I believe he won’t be JC or Coffey, but John Coffey.

I felt compelled to look up the name to see who John Coffey really was. All the early hits on google describe the role played by Michael Clarke Duncan in The Green Mile based on the book by Stephen King. That John Coffey is a much more complicated character than our John Coffey.

The next bunch of hits are about a punk rock star from the Netherlands named John Coffey. We’re definitely getting warmer. He’s most famous for his amazing beer catch last June. Here’s a video of the catch and then an explanation of the physics behind it.

The next John Coffey I found is a professor with a PhD n Positive Developmental Psychology. I’ve decided that this is the John Coffey our John Coffey is named after. All his papers on Linked In are about happiness. You could never encounter a more positive pup. Such an appropriate namesake!

We’re looking forward to hanging out with John Coffey. He’s quite the entertaining character. Left alone for twenty minutes in the kitchen this morning, he rearranged the furniture. He moved the Frank bed to the middle of the room, ostensibly so he could lie on it and still see around the corner to where I was in the living room. He pulled a dictionary (a big dictionary, think unabridged, hardback) down off the kitchen table and I found it, unmutilated, but open to the J’s! Maybe he was looking up who he was named after. He dragged the toy basket to the center of the room, right next to the Frank bed which made it easier for him to sort through the plethora and take out all the yellow dewalt plastic tool casings and make a separate pile of them by the door. (Nick brought these home for Frank and Tennessee – great free chew toys.) 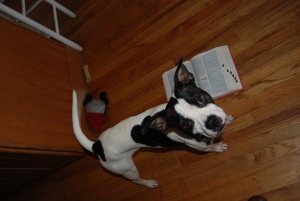 John Coffey isn’t a big dog; he could use a few more sandwiches. When Livia told me that he’d gained nine pounds in his three weeks with them, I was astounded. He’s so skinny. I can’t imagine what he looked like previously. She said he was a ‘skeletore’ and I believe it. We’re trying to pile on the pounds, but he prefers to eat his food scattered across the floor so I’m not sure how much he’s taking in. When I put a bowl of food down, he promptly dumps it. Not sure if this makes dinner more interactive for him, or he is complaining about the service.

Today I ran him three miles. He’s excellent on the leash, a pro at pulling his leg out from under the leash when it gets tangled. I appreciate this, as I had to stop every time this happened with the last few fosters and that makes for a choppy run. John Coffey has no time for that, he can’t take in life fast enough.

So far the cats are giving him a wide berth. After Chism and Kylie, they are mentally scarred but hopefully not for life. John Coffey is curious about them but only in the way he is curious about pretty much everything. He watches them, but when they run away, he moves on to more interesting things – like bounding after a leaf or tackling a tennis ball. He’s got much bigger fish to fry.

2 thoughts on “Bring on the Good Times!”