John Coffey has been with us now for eight days.  I thought we knew him pretty well, but yesterday I took him to an OPH event and discovered a whole new side of him.

He was frantic, pulling at his leash and barking. The only way to calm him was to pick him up. At thirty-five pounds plus, that didn’t last long. Luckily there were several teens there who have that teenage ability to see right through bad manners and noise. They happily cruised him around the parking lot, hunkered down with him on the far edge of the event, and sat with him in the kissing booth (which he rocked, by the way. John Coffey is a first rate kisser.)

I was frustrated that all anyone was seeing was the bad side of John Coffey. I’d hardly ever heard him bark before yesterday. He’s actually a quiet dog. No one who was in Hanover yesterday would have guessed that.

He rarely pulls on the leash, but yesterday he couldn’t stop pulling and was gagging and coughing from the effort. Not pretty.

He growled and barked at most of the boy dogs. I don’t think he meant anything by it, but again, not an attractive feature. Who wants to take home the bully dog? At our house, he and Gracie have bonded and really enjoy each other. He’s a lover, not a fighter.

I couldn’t even distract him with tennis balls yesterday. When I picked one up, his gaze would lock on to it and he’d chase after it, only to drop it the moment another dog/person/food/noise/car came into his view. He was too distracted to show off his superior catching skills.

So all anybody got to see was a nervous, frantic, barking bundle of snarly nerves. That’s not John Coffey.

Here’s the lesson in this- not all dogs enjoy adoption events. And some dogs would do better to avoid them altogether. John Coffey is one of those dogs. It’s not fair to put him in a situation where his best self can’t be seen. Especially when he has such a great best self.

So, while I’ve got you here, let me tell you about his best self.

John Coffey may be an energetic boy who can catch wayward tennis balls launched from any angle, but he is also a WORLD CLASS SNUGGLER. He is the perfect partner to snuggle with on the couch in front of a movie.

John Coffey is also an EXCELLENT EXERCISE PARTNER. Today my neighbor and I ran him four miles. He has wonderful leash manners and is friendly to everyone we encounter.

John Coffey is an ABSOLUTELY DEVOTED LOVER who will greet you with kisses and whimpers of ecstasy when you return home after an outing or from a trip upstairs to get the laundry. He loves indiscriminately and will greet all your guests with the same enthusiasm. He has yet to meet a person he doesn’t like.

John Coffey LOVES KIDS. He had the privilege of kissing on a few from the kissing booth yesterday, but afterwards when I took him for a short hike on the rail trail he met another shy little kid who approached him carefully, cautiously. John Coffey wiggled his encouragement and then leaned up to give him a quick face wash. The little boy giggled and then ran after his mama shouting, “The puppy LOVES ME!” Made my day after the frenzy at the Adoption event.

And of course, John Coffey is a PHENOMENAL BALL CATCHING ATHELETE. The dog is crazy coordinated. When you combine this with his over-the-top enthusiasm, remarkable smarts, and eagerness to please, his potential seems limitless.

My 13-year-old son had planned to have friends over to make a music video showcasing John Coffey on Sunday. You may recall that the weather was pretty nice this weekend. So, teenage intentions being what they are, the video didn’t happen, but the fort in the woods and the baseball game in the yard did. My hubby is the bestest, so he took the downloaded footage and put it together in a little montage for your viewing pleasure. I wish the film quality was better, but hopefully you’ll still get a good idea of John Coffey’s happy talented nature. There’s a little ball catching plus some dancing-with-the-slipper (another of his favorite activities which showcases how well he can entertain himself).

Click this link to see John Coffey in action!

Many people met John Coffey for the first time yesterday and I’m afraid they got the wrong impression. Just in case any of them are reading this, I hope this post clears things up. 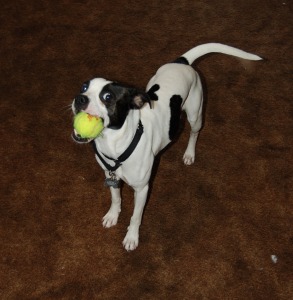 3 thoughts on “The Best Side of John Coffey”