Once again the snow is piling up outside, but this time around Lily has a playmate to keep her busy and it isn’t me and my tennis balls. 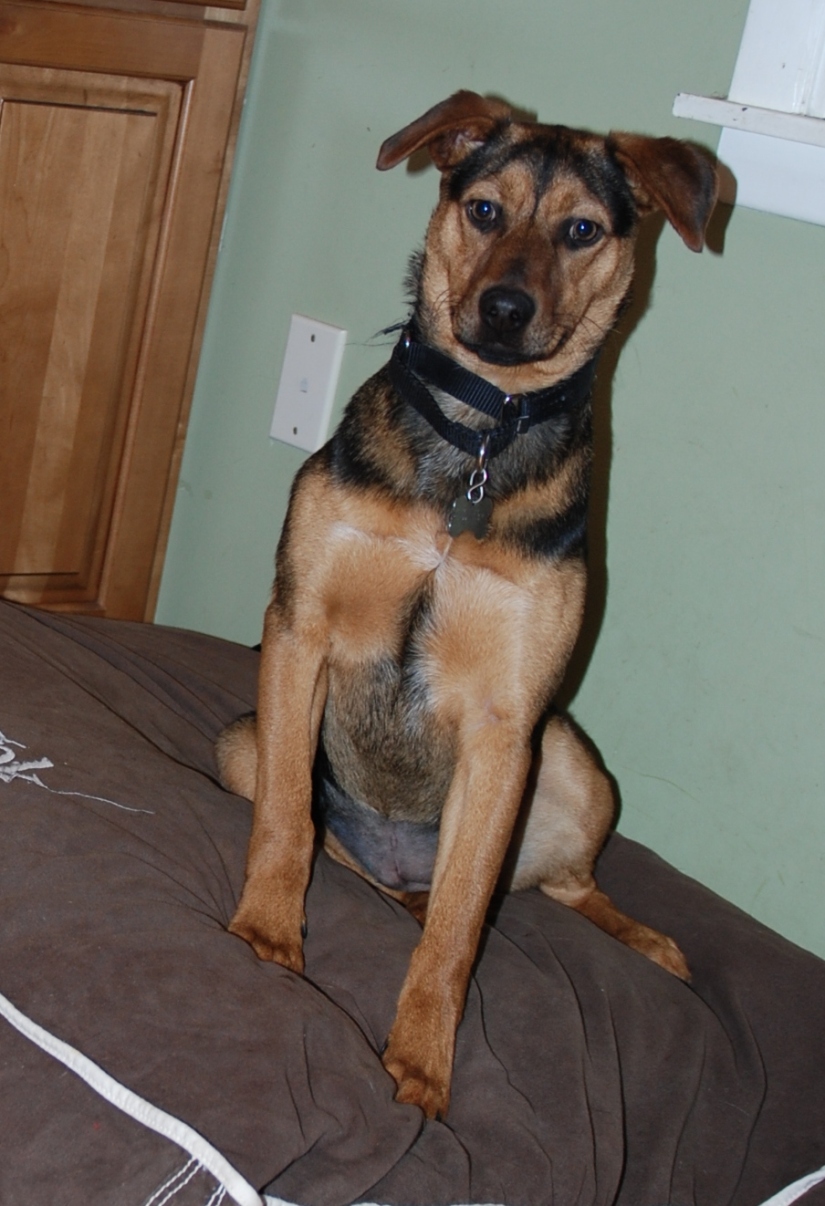 Itz Luv joined our party on Saturday arriving on transport from South Carolina. She is one easy-going sweetie-pie taking everything in stride. She sat nicely for her bath, was appropriately grovelly in her introductions to Gracie, and then eagerly took on Lily with some full-on all-body contact hard-core play. She’s half Lily’s size and weight, but rarely backs down, until Lily sits on her (literally). Both dogs are grinning ear to ear as they slam around my kitchen, wrestle over toys, and have never-ending tug-of-war matches.

That sigh you heard? That’s me relaxing because now I’ll get some uninterrupted work done.

Luvie, as we call her, went to her first OPH event on Sunday and was a super star – playing with all the other dogs and smooching with anybody available. She was most especially enamored with the kids.

When people asked me about her breeding, I tried out several ideas, but finally landed on, “dog.” Luvie is listed as a beagle/shepherd, but I think you could probably make a case for nearly any dog breed you can imagine. I’ve been searching in vain for the little plastic dog that came with my daughter’s doll house years ago. I swear it’s a spitting image of Luvie. If the dictionary has a drawing of dog, Luvie is it. She simply looks like a dog. 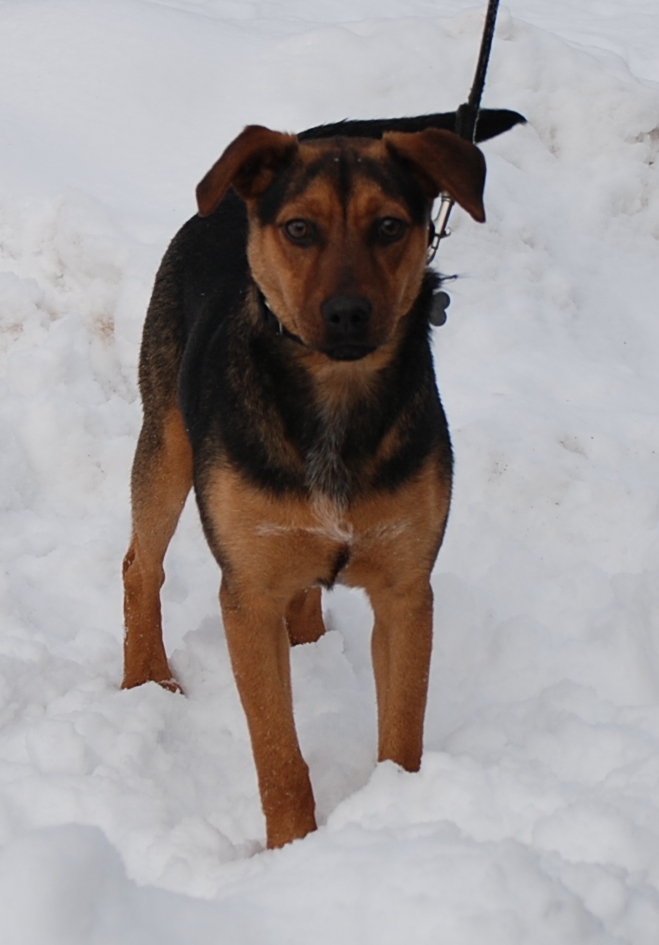 It’s refreshing to have such a simple dog. No issues, no barking, no whining, no pinning, not even very much peeing-in-the-house. She’s happy in her crate; she’s happy out of it. She sleeps through the night, walks nicely on the leash, and eats her meals with no hesitation. 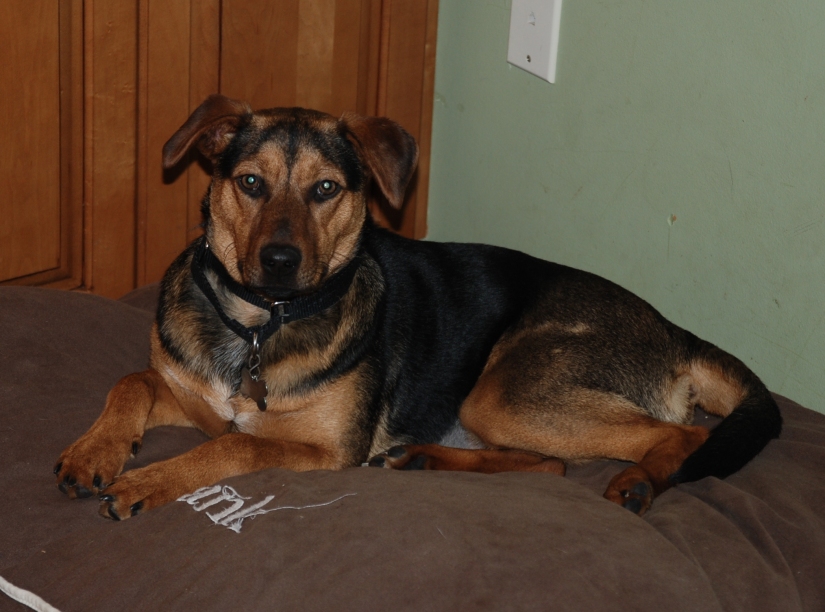 She happily greets everyone she meets, except the cats. The cats she feels she needs to announce. As in, “HEY THERE’S A POINTY THING SITTING ON THAT CHAIR RIGHT THERE!”  or “HEY! THERE’S A HISSY THING SITTING ON THE PORCH! SEE IT? SEE IT? SEE IT!!” So far, she’s done nothing other than be certain we know there’s a cat about. She doesn’t get close enough or they don’t allow her close enough, to discover her true feelings about cats.

Which is why when she takes off on Saturday with her approved adopter, it’ll be a test run. All adoptions to houses that have cats, are by default, trial adoptions.

(Although, Luvie’s so awesome I’m pretty sure her adopters will side with her over the cats. I would.)

Tomorrow is Lily’s big day. She’s going to the vet to be spayed. I’m a little nervous about the recovery. Keeping her still so she can heal will be a challenge. I imagine that spaying a full grown dog after she’s given birth to ten puppies could be a bit more complicated than spaying puppies. She’ll need to rest and resist her unquenchable desire to run and chase balls and slam Luvie around. I can already hear the whining when I have to separate them Friday. Here’s what she’ll be missing: 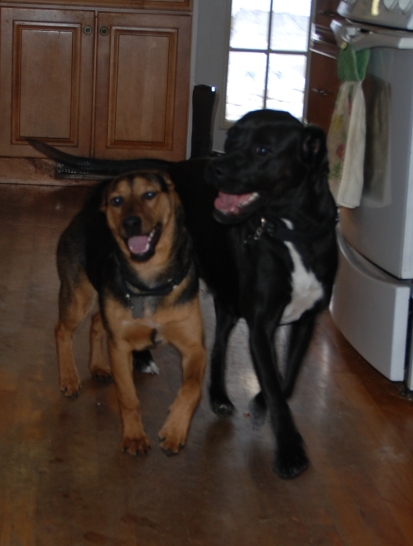 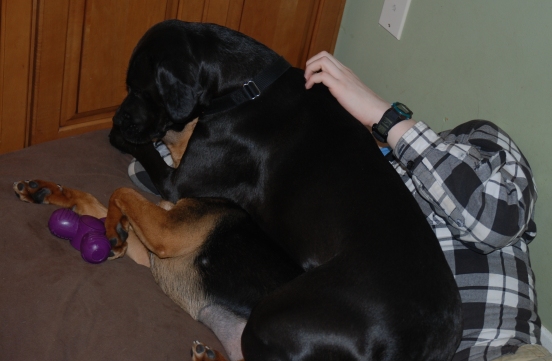 So, prayers and good ju-ju for Miss Lily tomorrow, please. (and for me)