Happy to report that Luvie has landed in a wonderful home only a few miles away. My good friend, Allison, adopted her. Her family has been looking for a dog for nearly a year. I’ve tried to talk her into plenty of pups along the way. It’s very easy to rush in and adopt the first cute dog that comes along, so I admire Allison’s patience in waiting for a dog that fits her family best (and her ability to tell me I’m nuts when appropriate). And boy did it pay off. Luvie is one of the nicest, easiest, sweetest dogs we’ve fostered. Super happy to know she’s staying in my life.

We waited nearly 24 hours to welcome our next foster dog. Meredith arrived in a shaking, terrified, fur-raised and tail-clamped-between-her-legs mess just after 7am the next day. Another foster picked her up from transport for me (at 6:30am! Thanks Debbie!). She texted me that Meredith was terrified and defensive and didn’t want to come out of her crate, so they’d had to dump her out, slip a leash around her collar-less neck and deposit her in their backseat where she cowered the whole ride with fur raised. I waited nervously for them to arrive and when they did none of us really wanted to touch Meredith (and clearly she didn’t want to be touched). So, Debbie’s husband used treats to distract her and slipped a collar on, and I brought her in the house.

I have to admit I was worried. My only other experience with a traumatized dog like this was Hadley and she’d taken hours of patience. Time I simply do not have at the present moment.

I didn’t want to deal with a fragile puppy. I was only looking for company for Lily, but when I thought about it, I realized that it’s surprising more of these dogs aren’t shell-shocked and skeptical of a human touch when they arrive. They’ve just spent the last month or two in a noisy shelter all alone after possibly wandering lost or being abandoned by the only family they’ve known. They’re spayed or neutered, vaccinated and a few days later loaded into crates stacked three or more high in a van and trucked for ten hours north. No pee breaks, no snacks, no water, but plenty of noise and bouncing. On Saturday, it was barely dawn when strangers reached in to drag Meredith out of the crate to what she could only assume would be another scary place. So sure, I’d be reluctant to come out, too. 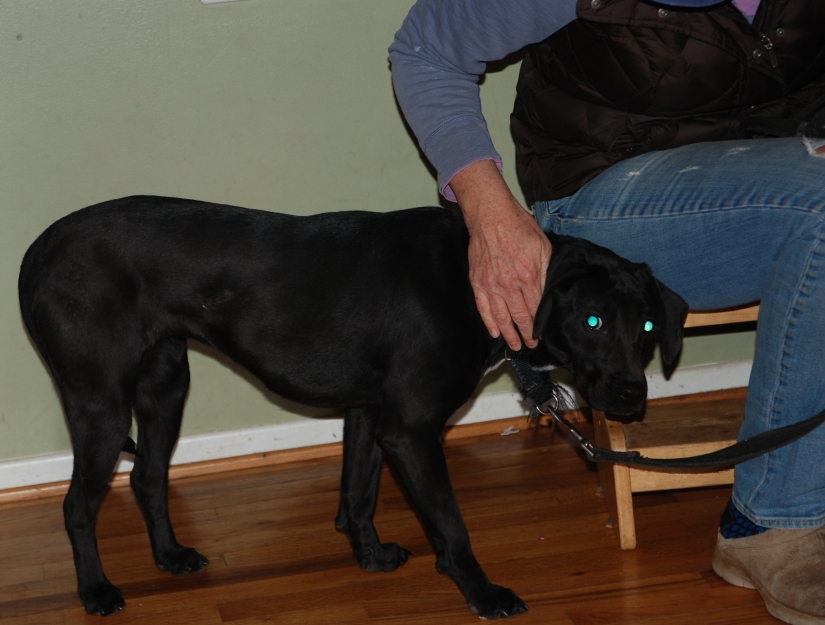 The best plan for handling dogs like this is to do a “shut-down” as OPH calls it. Bathe her, feed her, water her, potty her, and leave her alone in a comfy, quiet, safe crate. No stimulation, no forced contact, just me handling her. This can take days, even a week, as long as it takes for her to chill. I followed protocol, giving her a careful bath, taking her for an unproductive walk, and feeding her a watered down mix of food (she refused water). Lily was lying in front of the woodstove on the Frank bed recovering from her spay operation, so I put Meredith in a crate in our warm living room to let her decompress. Then, I went outside to prune our fruit trees in Saturday’s unseasonably warm weather.

When I returned to the house a few hours later there was an all-out nerf war being waged between middle school boys in my house – over, around, and occasionally, inside, Meredith’s crate (seemed dozens of nerf darts managed to get through the grating). Great, I thought. We’re so good at this shut-down thing. I shooed the boys away and carefully coaxed Meredith out of the crate. To my surprise, she’d perked up. Seems the entertainment worked some kind of magic.

By dinnertime she was wagging her tail and by the next morning, she was happily sauntering along next to me on a walk. Since then, her happiness level and energy quotient has grown with every passing hour. Now, when I reach down to pet her, she faints to the ground in ecstasy and whines out her happiness as I scratch her belly. When I return to the room after any kind of lengthy absence (like when I go upstairs to change the laundry or out the door to grab a log for the fire) she leaps in the air with joy and throws herself on me. Never has a dog been so happy to see me (pretty much every few minutes).

Lily is feeling better and while she’s restricted to leash walking and is completely jonesing for a tennis ball, she has been allowed to play nicely with Meredith. Meredith isn’t a puppy, although she’s clearly young. She enjoys tussling with Lily and stealing Lily’s toys for which Lily rewards her by sitting on her. They share the Frank bed, sleeping in a large black lump.

Oh, and I forgot to mention that Meredith is a mini-me of Lily. Its spooky. If you glance in the kitchen quickly, it’s easy to mistake one for the other. Here’s a side-by-side look: 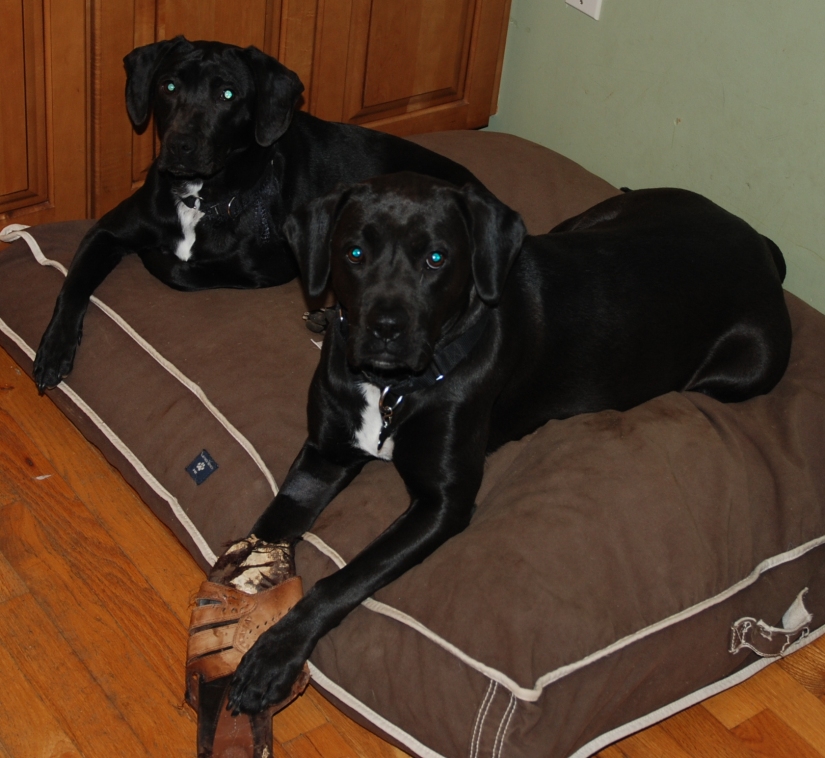 Here’s another just because I can’t stop taking their pictures together:

Now, because you can’t meet Meredith in person, I simply have to share her exceeding joyfulness with you. I’d just left the room to move clothes from the washer to the dryer, so I was gone at the outside, maybe 4 minutes, but this is how my fans greet me EVERY TIME I leave them even for a few moments. It’s nice to be loved. Makes a girl pretty happy.

(Okay people at Saturday’s transport– recognize this dog!? Can I get an AMEN?!!) 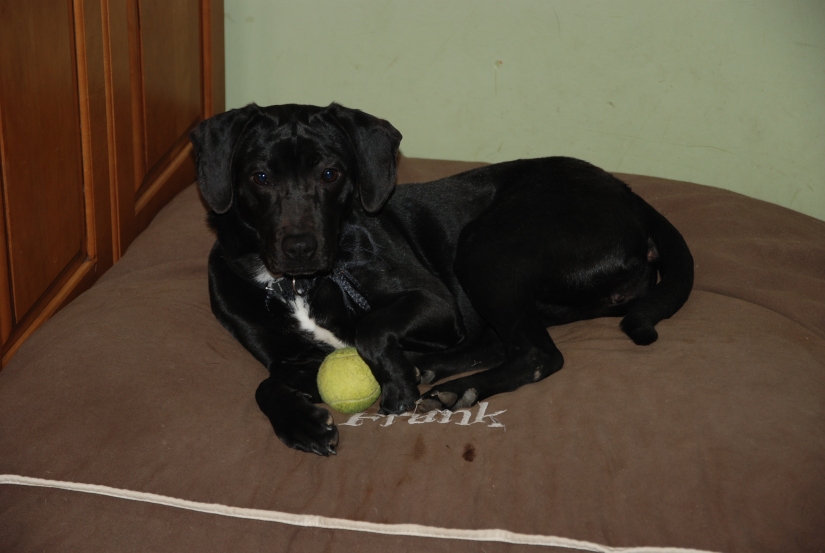 6 thoughts on “Transformative power of a nerf battle: the journey from cowering misery to leaping happy”