I’ve moved more times than I care to remember in this life. And I know that each time I relocated, there was an adjustment period. Unloading boxes and setting up utilities and discovering the idiosyncrasies of each new house and neighborhood was stressful in many ways – both good and bad. It always took at least a week or two before I really felt like I had my feet on the ground and could begin my new life.

I’ve learned that my foster dogs go through even more stress when they move in with me. And it’s not just the flying nerf darts, grumpy Gracie, or the swatting and suspicious cats. I know the dog I bring home from transport will not be the same dog I hug goodbye after a few weeks.

I wrote last week about Meredith’s miraculous transformation and it was that, but she continues to transform. As she has gained confidence, her energy level only increases. It’s dangerous to update your foster dog’s information on the public website right away because like a guest who has just arrived, the dogs are many times just being polite. They don’t know you well enough yet to let down their guard.

On Meredith’s page, I wrote “excellent leash manners” because she seemed to have those. She trotted carefully next to me, always glancing up to see if I needed anything. But a week later, Meredith has settled in and realized that nerf darts don’t hurt, Gracie is all bluster, and the cats don’t really mean it. Now she lunges out in in front of me, straining against the leash in her excitement to head off for a hike in the woods or around the pasture. Because she is only 30 pounds or so, this isn’t necessarily dangerous (unless it’s barely light out and you’re wearing slippers and headed downhill on frost-covered grass when one of the cats taunts her by casually appearing just out of reach). Her leash manners need some work. I deleted any mention about leash manners on her OPH page.

At press time, Meredith is still a little on the shy side with new people, but I’m fairly certain that will change. When new people reach for her, she backs away and ducks her head. Yesterday when we popped in to the OPH event at the pet store, she cowered behind me at first, but after store workers, OPH volunteers, and potential adopters began offering her treats, I could see a light go on – Ah! People=treats! She began greeting everyone who entered the store wondering if they, too, came to bring her treats. I have no doubt that the overly enthusiastic love that Meredith showers on me will soon be offered to all people.

Here’s a picture of her hanging out with my little brother and his wife last evening. She’s learning that people won’t hurt her and many of them have treats in their pockets.

This past weekend, after four months in OPH care in which she gave birth to ten puppies, overcame some health issues, weaned her puppies, discovered her love for tennis balls, showered her devoted and vocal love on everyone in her path, was spayed, and regained her svelte figure, Lily left with her forever family. Gulp.

The Frank bed seems much bigger without Lily.

I dreaded saying good-bye all week. I’ve known Lily longer than any other foster dog besides Carla. We all grew very attached and how could we not? Smart, loving, funny, energetic, tennis-ball obsessed Lily. She helped me with both Luvie and Meredith- mothering them, correcting them and giving them confidence. Sometimes it seemed like she understood English. When Luvie was getting too crazy on the leash, all I had to do was say in my non-nonsense voice, “Settle down!” and if she didn’t, Lily would body check her the next time she pounced. When Luvie was barking at one of the cats in the kitchen and I commanded, “Leave her!” if Luvie didn’t, Lily would put her large self between Luvie and the cat. It was Lily who curled up next to a terrified Meredith on the Frank bed, offering her warm self and friendship. And those big, soulful eyes! How could you not be smitten? 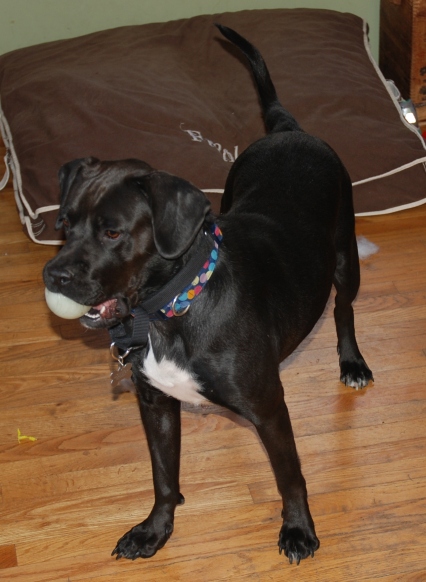 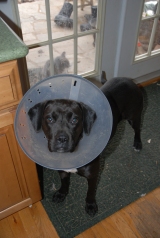 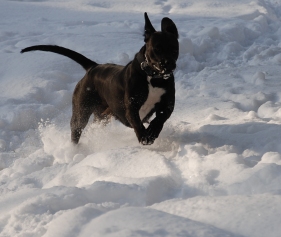 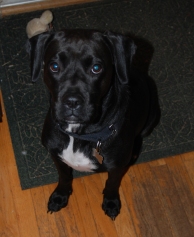 I said time and again, “If she weren’t going to such a perfect home….”

Lily has been “adoption pending” for the past month with us. Nick and I agreed that if for some crazy reason the adoption fell through, we would adopt her. But the family who adopted Lily seemed to sense they’d hit the lottery with this dog. When they met her, they fell instantly in love. We stood in the driveway and watched as they threw tennis ball after tennis ball for her. The kids’ big smiles and the parents’ smart questions made it very clear Lily was headed for a good life.

But my heart does feel a little bruised. This one was tough. Bob sent an email soon after they’d arrived at their home in Virginia telling me how well Lily was doing and how much they already felt she was part of the family. I’m sure that this week Lily will chew up something important and her energy level may be over the top, even for this ultra-marathon running dad. But I am equally certain that Lily has already stolen their hearts. An email from Bob earlier this week confirming the details of picking up Lily said it all – “We feel a little guilty getting such a special dog in our family!” 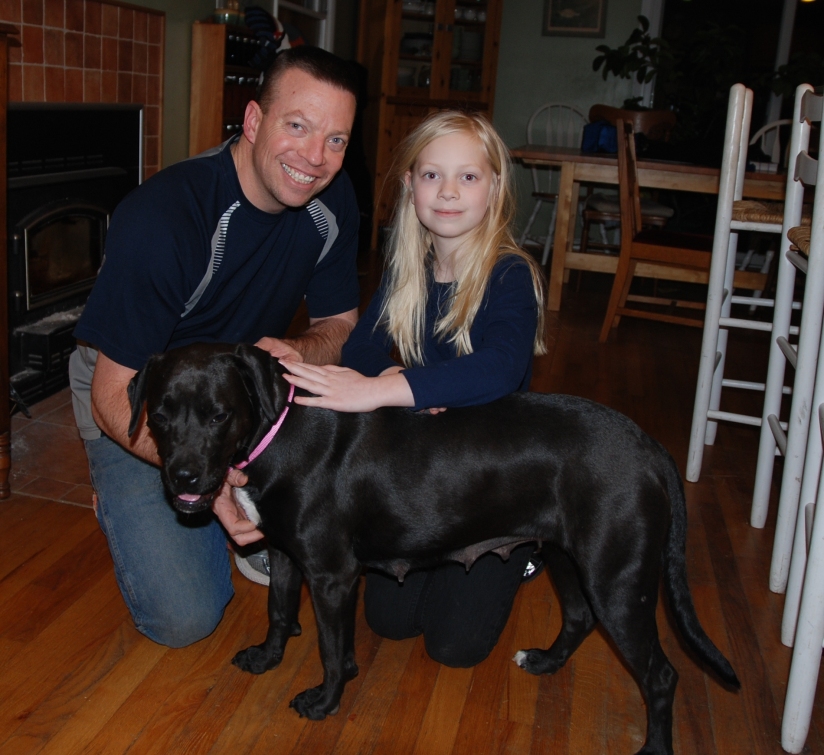 I know this is a long and winding post, so I’ll save the details of our newest foster for a later post! Okeriete (my Hamilton-obsessed daughter named him) arrived on Friday night. He is a tiny ball of unending happy. Perfect for a mommy missing her Lily. Here’s a few photos and a video. I’ll post about him later this week. 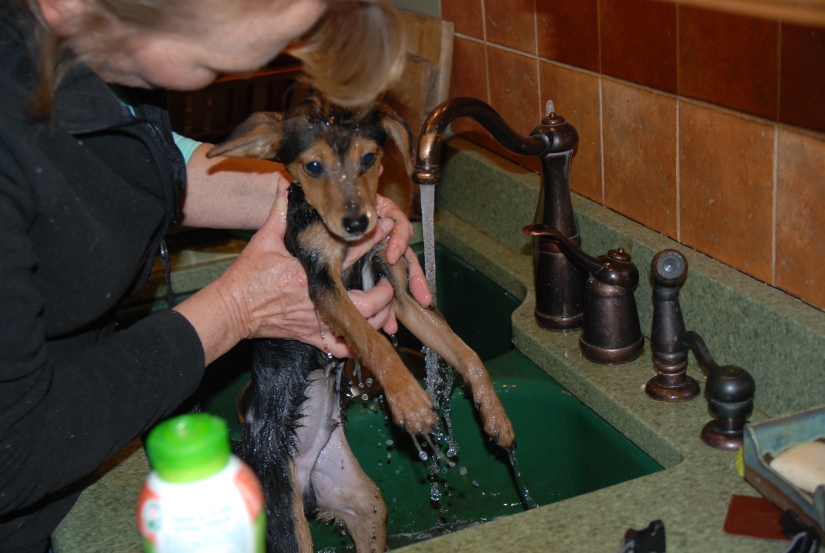 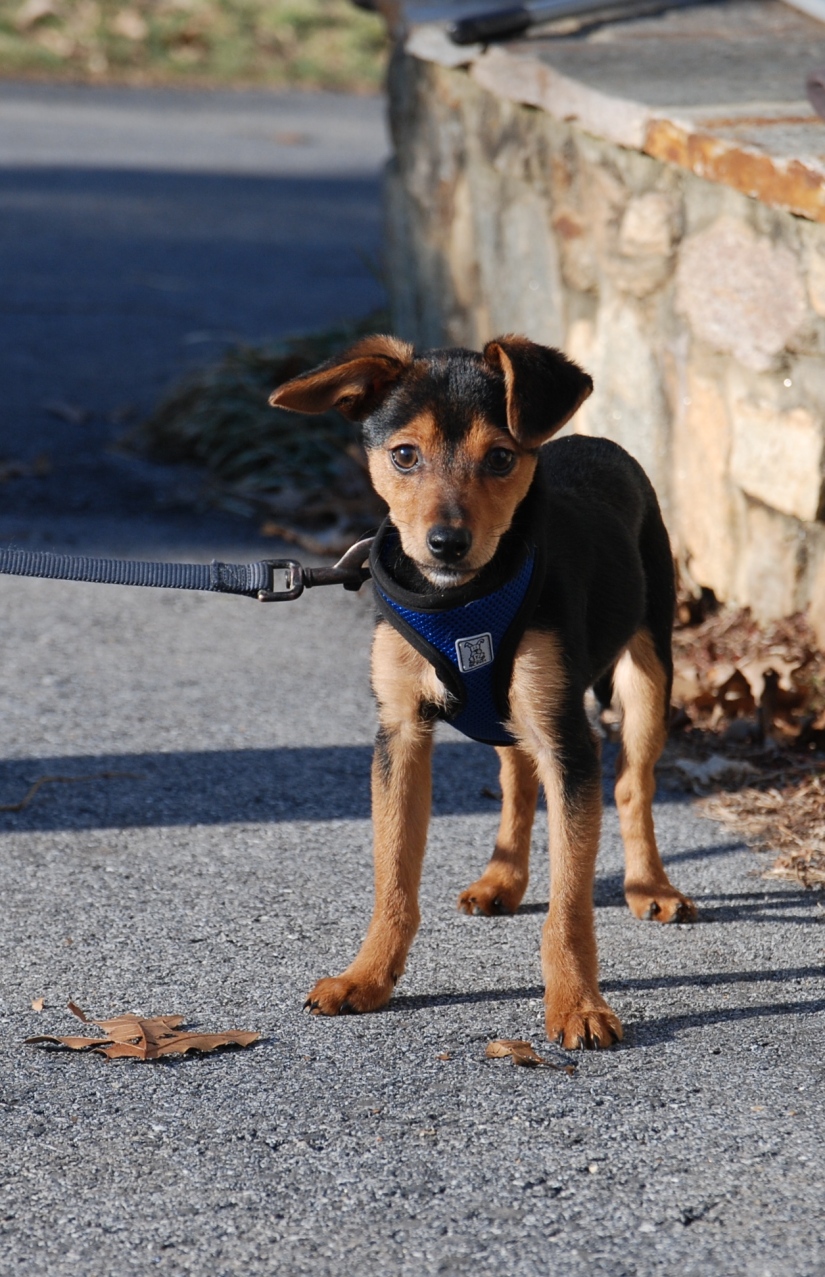