My trusty co-pilot and helper (read: the only kid without a driver’s license or a job this summer) and I met the Lucy train in Hagerstown last Wednesday and picked up our latest charge. She’d been riding shot-gun for the last leg with a very nice person named Terri. When I opened the hatch of my SUV, she hopped right in, settled in the crate we’d brought and went to sleep. Obviously, she wouldn’t be a high-maintenance guest.

This poor pup has been through it—I can’t say exactly what, but she is riddled with scars, the worst one being a permanent necklace from where a collar was embedded and/or she was left chained up for a long period. Despite all that, she is a happy, friendly, easy-going girl. The resilience of dogs is something to behold.

Thankfully, she doesn’t appear to be pregnant. As exciting as that would have been, the last thing this sweet girl needs is puppies. Her skin is inflamed and hot and covered in some form of eczema that requires us to keep a cone on her 24/7 so she won’t chew herself bloody. It’s a testimony to her good nature that she handles her misery so well. She scratches at the cone trying to get to her neck and chest, where the rash is worst. She chews at her side, biting the plastic cone that prevents her from a reaching her itchy skin. It may not help, but maybe the effort brings a mental relief. I remember scratching at my riding helmet covering my itchy head when I was in the middle of a competition or lesson. It’s psychological; you feel like you’re doing something. I would shake my head, too, which I’ve seen Lucy doing.

If you’ve ever had poison ivy or hives covering your entire body, you might have some sense of what this pup is going through. The urge to itch is all-consuming and yet—she can’t reach it. She’s headed to the vet on Wednesday to confirm that she isn’t pregnant and hopefully get a prescription for some serious drugs to help her out. The vets that examined her before she came north diagnosed a flea allergy. While there are no fleas on this girl now (I’ve given her enough oatmeal baths to verify that), I would assume at some point she was infested with them.

The other dogs have gotten used to Lucy’s cone. It makes her a wideload, but she has no flagger car proceeding her. By now, though, no one even flinches when she bangs into them. I guess they all assume it’s part of her head. They’ve learned not to try to share the water bowl when she’s drinking.

Lucy, herself, is unflappable, taking the inconvenience in stride. When the cone gets caught on a chair or the doorway, she simply backs up and tries again. As I’m working in the kitchen, she stays close and the cone pokes my legs. I want to grumble at her to stay out of the way, but that seems cruel since she can’t help that she’s wearing this enormous plastic appendage.

And besides, she is a sweetheart with a hound smile and a playful nature, racing around the kitchen, banging into cabinets when she’s released from her crate. Just like my personal hound dog, she loves to shake the stuffed animals to ‘kill’ them and then roll on them once they’re dead.

Bambi, who has transformed since last I wrote about her, bounds around the kitchen with her, occasionally grabbing the edges of Lucy’s cone and yanking. Lucy only smiles at this and indulges the puppy. Bambi is a bundle of happy energy, zipping around with greyhound speed and lab curiosity. She is a hoarder and piles dog toys in her crate and kitchen towels and stray shoes on the Frank bed.

After five days of refusing to leave her crate, Bambi is never happy to be relegated to it. When I put her in her crate time for morning naps and at night for bed, she has to be lured in with a treat. She barks at anyone who passes by, wagging her whole body and banging the crate sides inviting them for a playdate. Outside she leaps and jumps like the fawn we’ve named her after – bucking her leash and tearing in circles. She is curious and explores this new world with abandon. We’re all wondering, “What happened to the quiet dog cowering in her crate?” 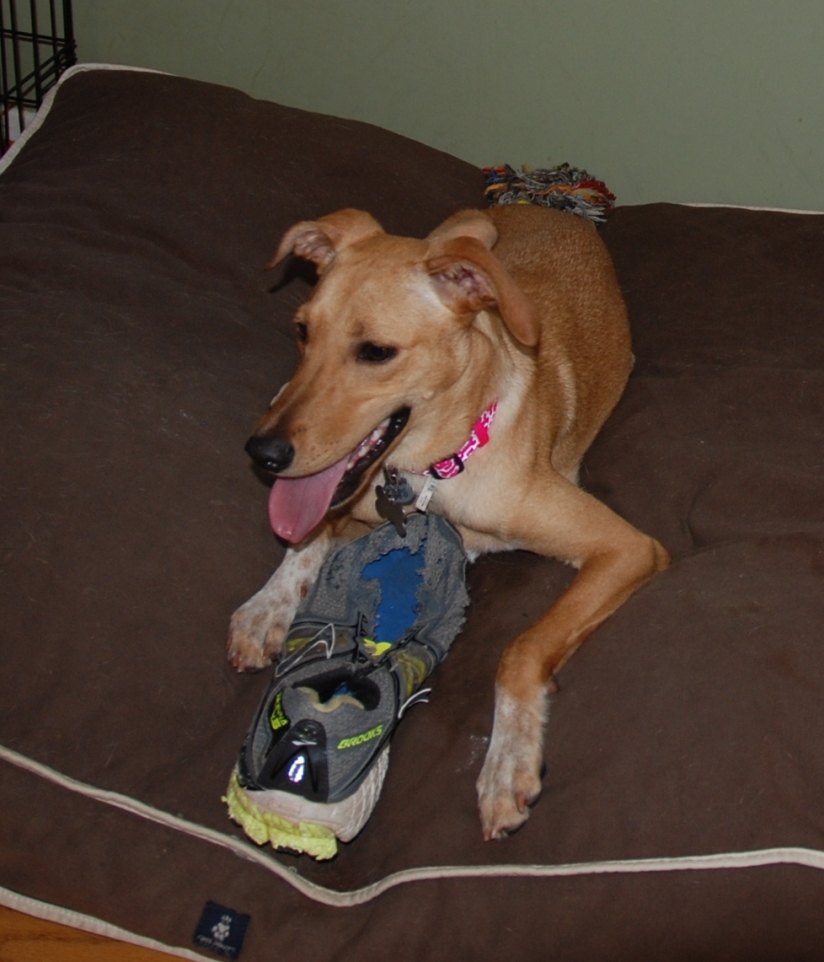 Bambi’s adopters came to meet her this past weekend and she was brave and friendly and completely not the dog she was just two days previous. She gets braver every day. Today I caught her counter-surfing, and I’m guessing that by the time her adopters take her home she will be more than ready to rule their house. 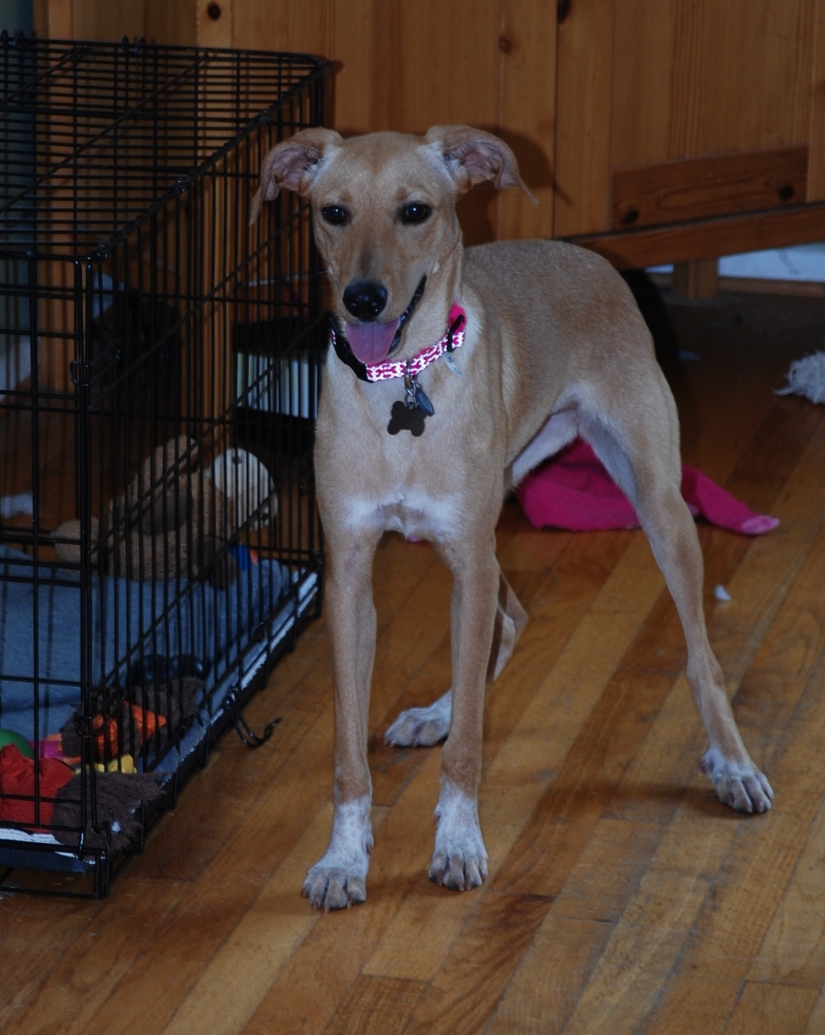 Ginger met her family this week, too, and they plan to take her home in the next few weeks. This has raised her to celebrity status at our house. All of the kids are fawning over her and laying the guilt on me. “Here, Gingee, you’re the best dog ever, you can sit with me.” As Nick was cleaning up dinner last night, I caught him slipping Ginger scrap after scrap. Ginger sat at his feet next to the dishwasher adoring him with her eyes and ignoring my invitation to go outside.

The present herd gets along fabulously. They don’t fight over toys or the hoof-chew that I’ve decided is really an everlasting gobstopper.  They take turns on the Frank bed or in Lucy’s crate together. There is peace in the land. (But there is also itching.) 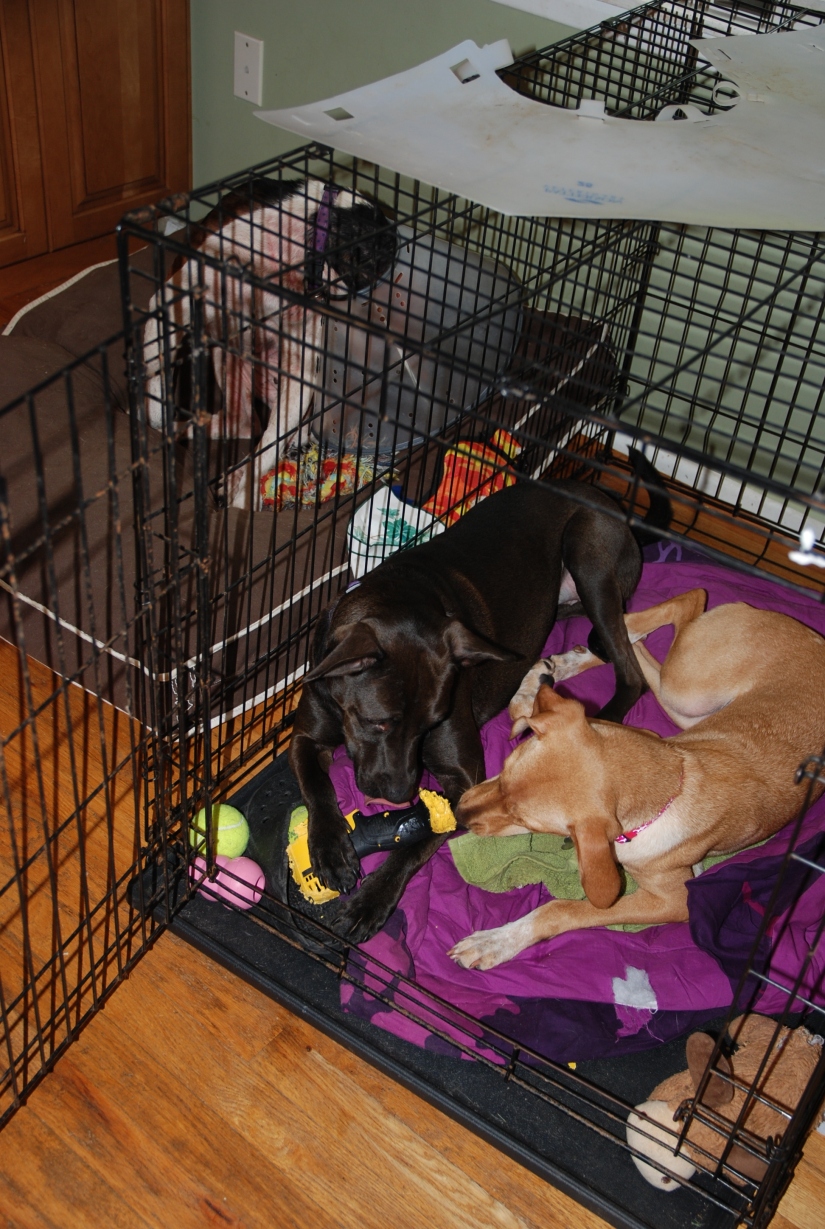 5 thoughts on “Our Present Pack of Pups”