So here’s the story I wanted to post last week, but couldn’t because of the jinx factor.

The jinx factor is what happens when I post about a dog’s adopters before they are actually adopted. Seems like the last few times I’ve done this (Whoopi was the latest), the adoption falls through. I was SUPER excited about Lucy’s family finding her, but didn’t want to jinx her, so I held back. Now that she’s happily in her new home with a family who love her, I can share the story I wrote last week and then never posted…

Lucy is doing well at Juanita’s and all week we’d been trading messages about her quirks and habits and sweetness. Because Juanita is a nurse who works nights, getting Lucy to any event this past weekend proved impossible.

All day at the New Freedom Fest, people stopped by the booth looking at our adoptable dogs. Again and again I thought, “If only Lucy were here. She might find her family.” 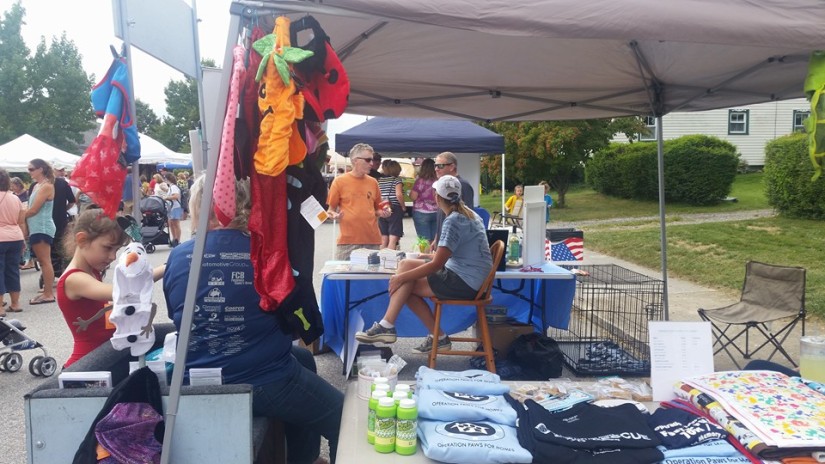 Driving home from the fest, I decided that instead of the six thousand chores that needed to be done at my house tomorrow, I would go to Juanita’s and pick up Lucy and take her to the adoption event in Hanover. It was high time she found her family.

When I handed Lucy off to Juanita the previous week, I felt a little bit like I had failed her. It had been a long six weeks from the crazy pick up in Hagerstown to the faux-pregnancy and that awful flea allergy, plus the spay and the endless cone of shame wearing. Add to that, teaching a dog who had never lived inside a house how to live indoors without alienating all the people who live there. Lucy wore me out physically and emotionally. When you put a lot of time and effort into a dog, as we had with Lucy, the pay-off is seeing her find her forever home. I was bummed I wouldn’t get that ending. But soon enough I was distracted by Edith and the dozen demons. 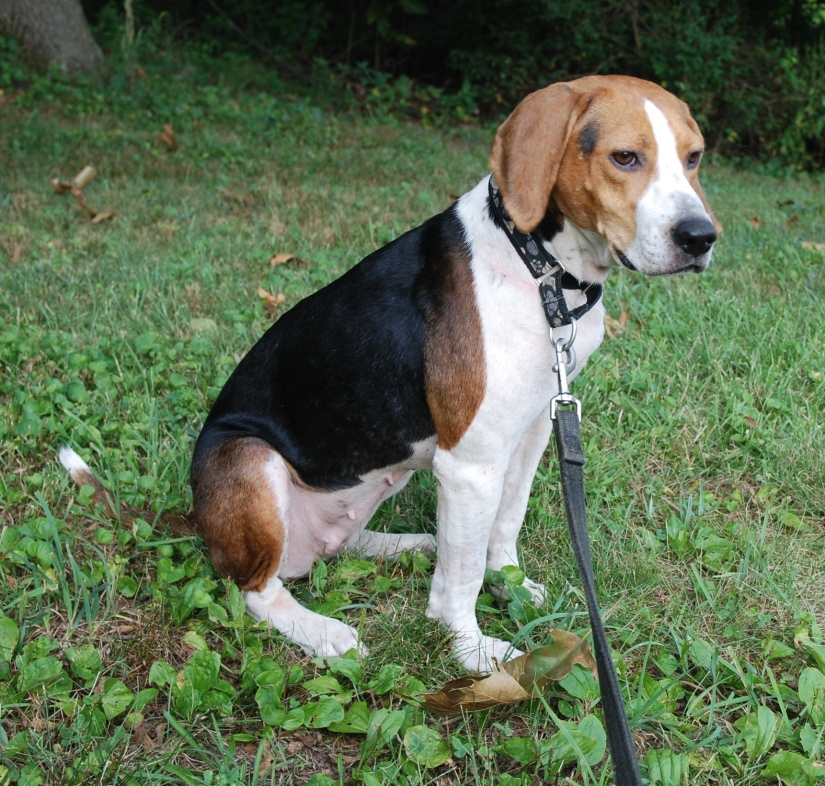 I’ve mentioned the adoption juju before, right? How sometimes dogs hang around and hang around and you just don’t understand why they haven’t been adopted and later, it all becomes clear? During the six weeks we had Lucy, she’d never had even one application. It didn’t make sense to me—there was so much good about Lucy. Sure, she was a hound. In fact she’s ALL hound, but surely someone out there wanted a houndish hound. There had to be someone who wasn’t put off by the food obsession and the busy chewing, who enjoyed the songs that hounds sing.

On Sunday morning I picked up Lucy from Juanita’s and brought her to our house for a few hours before heading to the event. She seemed mildly pleased to be back here, but I know for certain she was thinking, “Wait? Vacation’s over?” as I put her in the outdoor kennel so that I could grab a shower and get ready for the event.

On the drive over to Hanover, it became evident that Lucy had been enjoying an entirely different menu at Juanita’s (the extra pound or two she’d picked up made that clear also). I had to roll down the windows to avoid being gassed to death.

Lucy and I joined the OPH crew under the canopy outside the Petsmart. I attempted to keep Lucy from raiding the treat bags and took her for a walk when the gas became to much for the other volunteers. It was fun to see everyone and Mindy showed me an amazing app called Pose a Pet that makes squeaker noises so that dogs will look at the phone as you take pictures (the app also donates profits to rescues so, win-win, right?).

Shortly after we’d gotten there, a young couple and their little boy approached the tent and the woman asked, “Is that Lucy?” as if Lucy were some kind of movie star. Having taken Lucy to four adoption events now, I have to say that no one has referred to Lucy in that tone. Everyone’s there to see the labs or the tiny dogs, and plenty of dads will stop and say, “Oh, look at the hound dog,” but no one has been that delighted to see Lucy.

When I told her that yes, this was Lucy, she became teary and cried, “This is her! I can’t believe she’s here!” I told her that she wasn’t supposed to be here, but I’d decided at the last minute to bring her.

Sarah and Tim had found Lucy on OPH’s site and just the day before had decided that she was the dog they wanted. They’d emailed OPH, but it being a Saturday, hadn’t heard anything yet. They were so excited about the idea of finally finding their dog, that they’d come to PetSmart to pick up a few items. I’m not sure they even knew that OPH would be there. Their little boy looked at Lucy and said, “She’s gonna be my sister!” He was excited and bounced around like only a five-year-old who’s getting his first dog can.

I warned them about her hound dog habits – the food, the nose, the howl. They smiled and nodded. They knew about hounds. They’d had hounds before. Lucy, leaned into her new dad and wagged all over. She seemed as sure as they were.

We learned that they had already applied and been approved and had just been waiting to find the right dog. And here she was! They hadn’t expected to see her and couldn’t take her home right then because they still needed to get supplies and send a picture of their non-bully breed dog to their landlord.

I gave them the leash and they took Lucy inside to pick out toys and be fitted for a harness. When they brought her back, they still couldn’t bear to leave her, so they took her for another walk.

I watched Lucy with this family with whom she already seemed to belong. The happy smiles – theirs and Lucy’s- made my heart happy. I got my happy ending, but more importantly, Lucy got hers.

Once again, I’m reminded that I need to be patient. There is a family for every dog; you can’t force the timing. The juju will happen; the adoption magic works. Rescue works.

12 thoughts on “Adoption JuJu and Jinxes”