Edith and the puppies are all doing well. I’m very proud to say Edith has put on some weight. She is still too skinny to be nursing 12 growing puppies, but she looks better. She’s an excellent mom, yet she’s also become quite independent. She spends portions of her days outside the box, relaxing on the floor (so far she is hesitant to use the Frank bed) or following me around the kitchen. When I sit with her on the Frank bed, she will lean in to me and close her eyes, and I swear she looks like she’s smiling. It’s the only time I truly see her relax. It’s been such a long journey for her to this place and she has so far to go, but I think she knows that she isn’t alone in this anymore. 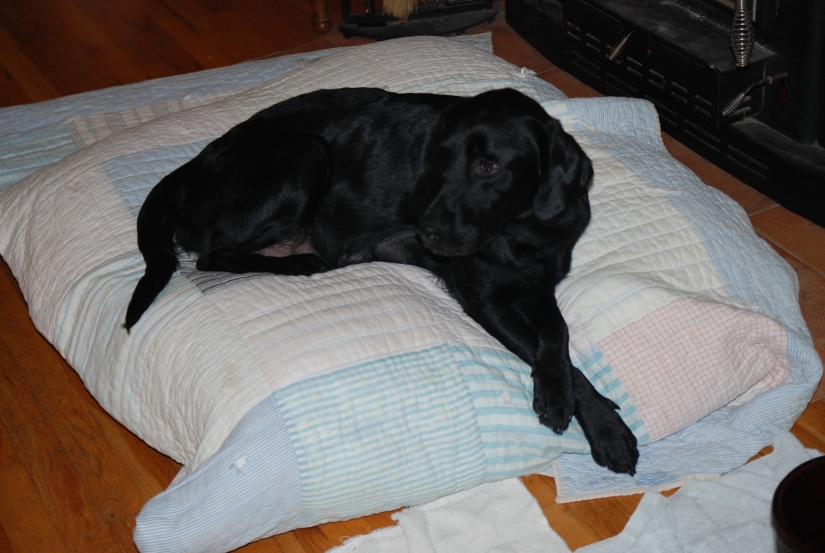 She’s relaxing more about the puppies, now, too. For the first few days, whenever anyone new came in the kitchen, she would pile up the puppies in the corner and more or less sit on them like a mother bird. The puppies protested this treatment. Now, though, when someone new comes in the kitchen, if she is in the box she’ll glance my way, and if she is out of the box she’ll stick close to me, trusting my judgment as to whether her puppies are in danger.

Last night when the puppies were whining loudly as I changed the towels in the box, checked their collars, and weighed them, Gracie appeared on the other side of the gate that keeps her out of the kitchen. She barked and growled, possibly complaining about the noise the puppies were making. (They tend to squeal when I place them in the plastic bin on the scale.) Edith watched her, but said nothing.

On Saturday, I left Nick and Ian in charge of Edith and the puppies, and spent the day at the New Freedom Fest, volunteering at the OPH booth and also selling/signing my books. The weather was great and we got to talk to lots of potential volunteers, fosters, and adopters. We had two dogs with us – Mademoiselle and Shortcake who garnered lots of attention (but sadly, no adopters). They were troopers, and completely spent by lunchtime.

The New Freedom Fest includes a Pet Parade with prizes and we were asked to be one of the judges. Serious pressure, here, at least for me because all the dogs were the best and I love the kind of enthusiastic people who participate in events like a pet parade. Watching all the dogs (and one cat!) go by brought back memories of when my daughter won the “best overall” category in the pet parade with one of our chickens many years ago. She spent several afternoons ‘teaching’ the chicken to walk in a cat harness, but in the end she towed the chicken in a wagon. Only in a small town, I suppose.

One of my former fosters, OPH alum Chase (Okeriete) won the “cutest dog” category. He was dressed like a hotdog and led by his equally adorable big brother. Of course, they got our vote, but I was happy they got the other judges votes, too!

When I got home from my day away, Edith was happy to see me and the puppies, whose eyes and ears remain closed, didn’t much care or notice that I was home. They still resemble guinea pigs more than puppies, but they are getting stronger. They’re pulling themselves up more, wobbly and unsteady, but nearly standing. Some of their personalities are beginning to show. Zora is quite independent. I often find her sleeping solo. 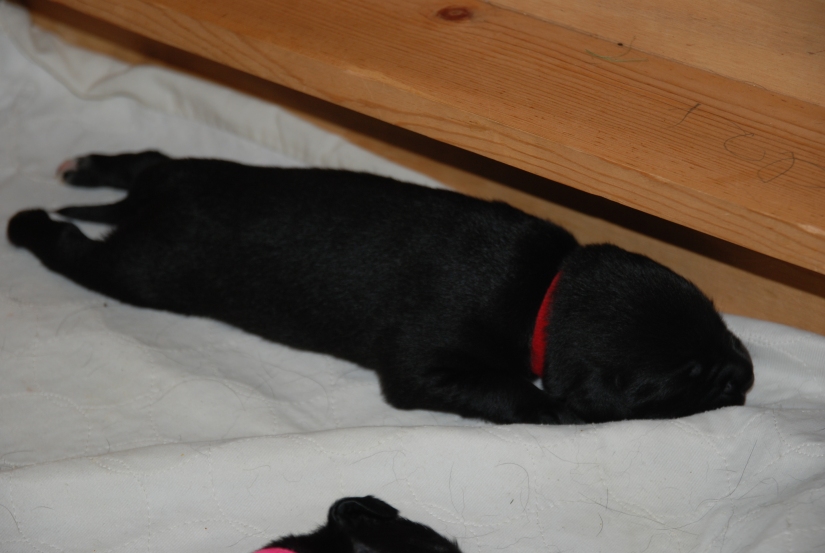 Charlotte needs constant company and she likes to be the top dog. She generally casts about for a puppy pile and then climbs to the top. 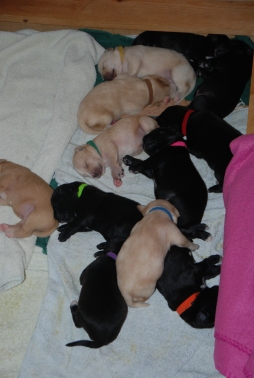 Charlotte is the blond puppy with the blue collar

Harper is very attached to her mommy and has a lot to say (as does Virginia). 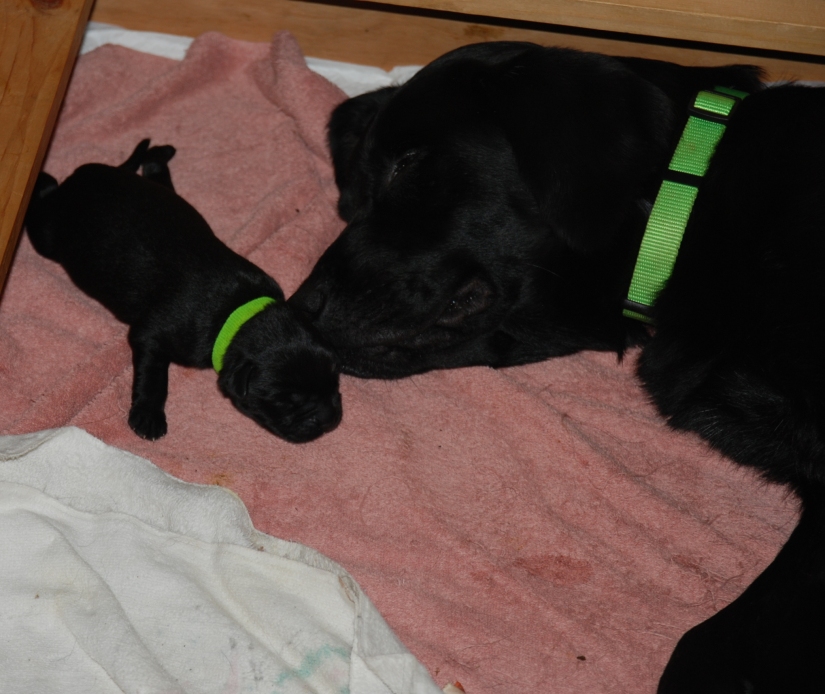 Hemingway is pretty chill at all times, generally lounging on his back with his legs splayed. (such a boy!) George, perhaps because she is the smallest, can move the fastest. She and Hemingway have a bond and are frequently snuggled together.

Beatrix is a tank and easily the biggest puppy. She also has a racing stripe on her belly.

Jane is a funny girl– very busy and social. She’s a darker blond than the other yellow pups with distinctive white markings. I’ve caught more than one picture of her with what looks like a very contented smile. Here she is with Eudora and Charlotte.

Every now and again they line up like piano keys to nurse and it creates a great visual effect: (The two prominent yellow pups are Louisa and Eudora – they’re quite the twinsies, although Eudora is one of the two runts and is a bit smaller and lighter than her sister.) 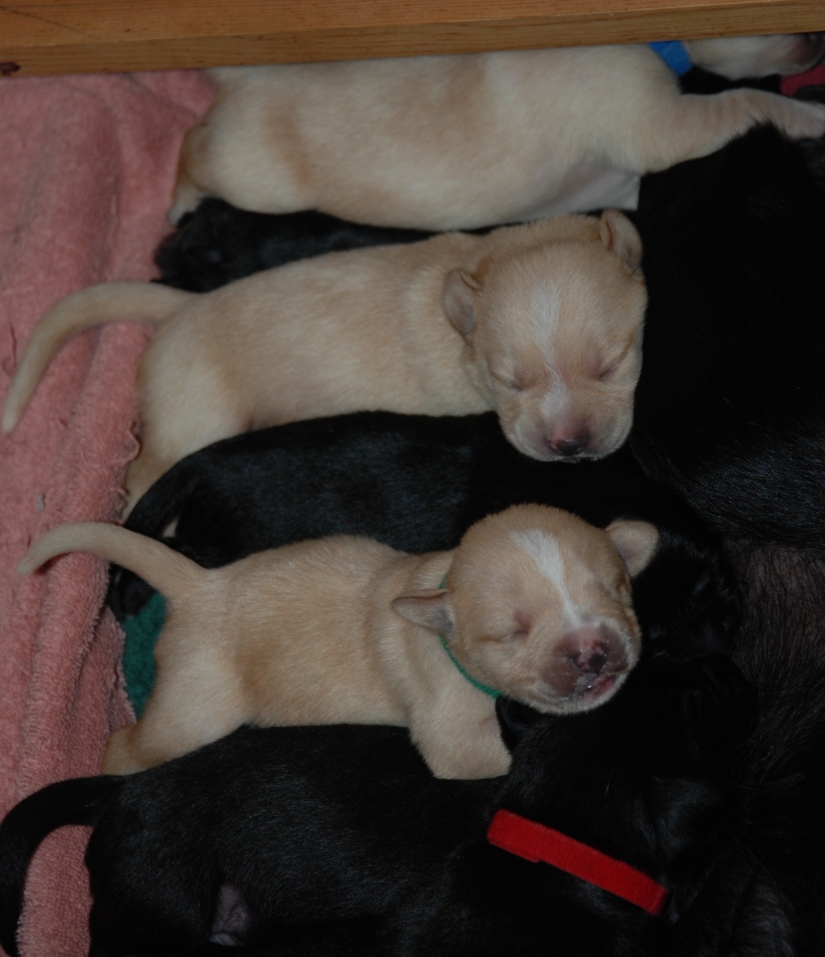 Six of the pups have adoption applications. On Saturday at the Fest, I spoke with several more people who are quite interested in a puppy. Maybe we can get them all adoption pending before their eyes even open! Of course, this doesn’t mean any of these people will adopt the pup they’ve chosen (or been assigned to), it only means they get first dibs. So, if you want dibs on any of these babes, I’d recommend that you get your application in pronto. There’s a cheat sheet at the end of this post to help you sort out the puppies on this blog and the Facebook group (which you should join if you need a puppy fix!)

One more thought (AND an opportunity!)–

I’m pretty sure that the Pennsylvania contingent of OPH is the smallest. While working the booth on Saturday, we agreed that we desperately need more volunteers and fosters. Two dogs, one of them Lucy, were unable to come to the event on Saturday for lack of a ride. We need people who are willing to pick up a dog from a foster’s home and bring it to/from an event. The more exposure the dogs get, the quicker they can find their forever homes. We also need volunteers to do things like reference checking (which can be done from home), taking pictures of dogs, visiting/spending time with dogs in boarding, and most especially organizing and staffing adoption events. If you’ve got any time to give—we could use YOU. To volunteer, go to the OPH website and sign up. I’d love to work with you to rescue more dogs!

NOTE: Several of you have asked about Edith’s expenses in terms of her heartworm treatment. Can I just say that you are the best people with the biggest hearts? I’m working with OPH and their heartworm coordinator to figure out a way to help you contribute to her treatment and at the same time help raise awareness of this horrible condition that is completely preventable and claims the lives of too many dogs. I’m hoping to be able to let you know soon how you can be involved, so stay tuned!

8 thoughts on “Still Life with Puppies”