Another returned dog. I won’t bore you with the details of why this dog has come back to OPH care after being adopted 8 months ago. Prior to that she was treated for heartworm in her foster home. Prior to that she was neglected and abandoned and left with the deepest, most horrifying embedded collar scarring I’ve ever seen. She makes Lucy’s neck look like a paper cut.

When Vera Bradley arrived, her adopter was apologetic, explaining that Vera was a little wobbly and confused because she’d given her a sedative for the two-hour drive. Vera’s nails were long and the adopter told me she had to have her vet do them because they’re black, plus Vera is sensitive to the sound of the clippers (we learned later in the weekend that Vera is terrified of snapping sounds – a neighbor’s nailgun sent her into a panic).

After she left, I took Vera to my local pet salon to have her nails trimmed while she was still in her twilight state. She stumbled in and stood for the trimming like a love. The technician was aghast at the embedded collar scarring and took Vera into the grooming area to show all the other employees. “I’ve never seen anything this bad,” she said. “Poor baby.”

And she’s right. It does feel like someone attempted to chop off Vera’s head, but more than likely her neck simply grew around a collar that was too small. Whether that happened when her owner wasn’t paying attention or while she was a stray, we’ll never know. I’m amazed she survived it.

When we got home from the groomers, Vera plopped down on the Frank bed and curled in as small a ball as she could, given her size (she’s about 60 pounds, but is easily at least 10 pounds overweight). She remained there the rest of the day, declining dinner until I sat beside her and urged her to eat. Even then she only finished half. 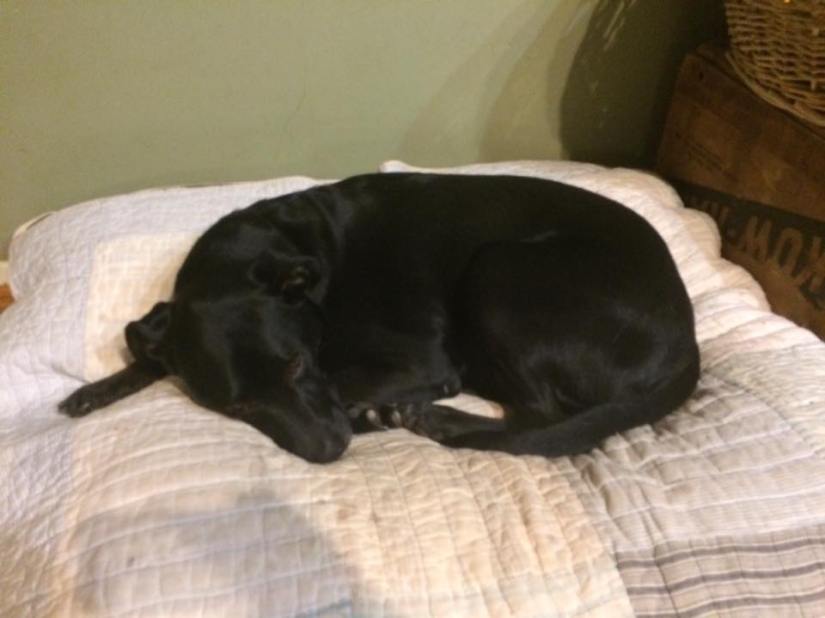 The next day, Vera had perked up only slightly. She’s almost five years old, but still, I’m certain there’s more dog in there than we’re seeing. She just has to get through this mourning period. I remember Carla  going through the same process. I have a feeling we will have a completely different dog on the other side of it. I saw hints of it when I was walking her. She was winded by the climb up our hill, but once she caught her breath she scooted after a blowing leaf before resuming her slow amble by my side. Back in the house, she lunged for the door when one of the kitties dared to paw at it. She definitely needs a home with no cats.

Speaking of homes—Estelle’s litter of holiday cheer is getting all set to take off for their forever homes. They are flea-less and decidedly outgrowing their puppy pen. No matter how many times I straighten up in there, laying the puppy pads down neatly, refilling the water bowl, adding clean towels—it’s only a matter of minutes before I hear the bump and crash of puppies who are too big for their digs tearing the place up. Just a few more days, I tell myself.

Full honesty here, it’s gonna kill me to say good-bye to this crew. That’s partly why I took Vera. I needed a distraction. Maybe it’s because they were the first litter I whelped or maybe it’s all we went through to get Fruitcake walking, but I love these pups and will worry over them more than any of my other litters. Not to mention they are four of the most personable pups I’ve hosted.

Fruitcake is hilarious—definitely the class clown, tunneling under the yoga mats, hopping in and out of the toy basket. He is never without his grin and is the most vocal pup – greeting me with sweet little yips.

Sugar Cookie is a tiny, flying imp—diving over the bigger pups to reach me, going a million miles an hour until she collapses and then, like my teenagers, sinking into a sleep as deep as the dead. 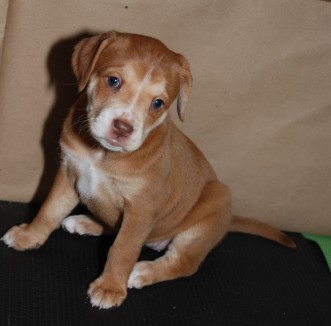 Toddy melts my heart. He is so careful and curious, but still a little insecure. He doesn’t yet own his bigness which makes him one adorable chocolate teddy bear. 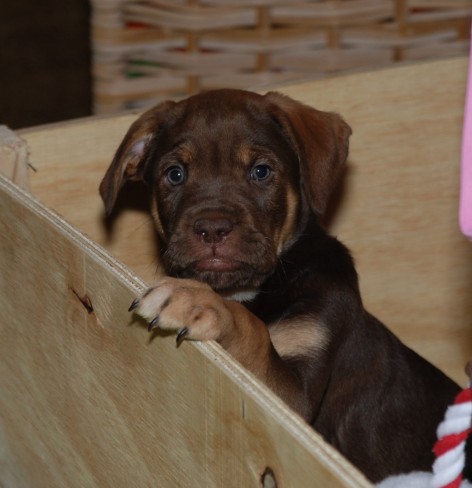 And Wassail, she’s my pretty girl, so well-behaved and polite. She’s the snuggle princess and we’ve splent plenty of hours with her in my lap as I read or watch The Crown.

They’re ready to take off for their real lives. It feels like a huge accomplishment, taking them from start to finish. And as they’ve gained their independence, Estelle has been free to embrace her puppyhood. She is silly and playful, carting off shoes and begging Gracie to play all-day-long. She’s so insistent that she’s brought out the puppy in Gracie and the two of them race around the house, dodging and tackling until Gracie has had enough and retreats to her crate. Estelle sits outside the crate in play-mode, butt in the air, tail wagging, paws stretched out in front of her. When she can resist no longer and pokes her head in Gracie’s crate, Gracie snaps her away.

Lucky for her, Vera is perking up by the minute and is a much more enthusiastic playmate than Gracie, lasting a few minutes longer. Hopefully, between the two of them they can keep Estelle entertained for the next few weeks until her spay surgery, after which she can head out to her forever home, taking a piece of my heart with her. Estelle is one of my easiest fosters to date; so anybody out there waiting for the perfect dog—get on it. This girl is sweet, playful, housebroken, crate-trained, and happy prancing along on a leash or lounging on a couch. She’s 25 pounds of doll-baby with plenty of puppy still left.

If you’d like to meet Vera or Estelle in person, we’re hoping to make it to the OPH adoption event at Pet-Valu in Shrewsbury this Sunday from 12:30-2:30. Either of my sweet girls would make a wonderful Valentine!

For more updates, pictures, and videos of my foster dogs past and present, be sure to join the Another Good Dog facebook page.

If you’d like to know more about my writing and my upcoming novel (!!), check out CaraWrites.com where you can find links to my writing blog, books, appearances, and book giveaways, plus sign up for my (very occasional) newsletter. Thanks for reading!

6 thoughts on “Dogs Coming and Going”