Daisy continues to surprise us as she gains her confidence and health. Thelma had her puppies on Tuesday and I watched Daisy, wondering if she would be bothered by the sounds in the next room, but she seemed unfazed.

The only notable thing that happened was that she destroyed her beloved football. I don’t know if the two events are related. Mostly, she’s just been acting more and more like a regular dog, even getting scolded for dumping over the laundry hamper and yanking me about on the leash.

We’re working on consistency with the command ‘sit’ and also giving her schedule time outside in the playyard by herself and daily crate time to prepare her for a potential adopter who will need to crate her while at work. So far, so good.

No matter how much progress we make, though, Daisy will require a special adopter – someone who will be patient with introductions. It may require a leap of faith. Daisy has part of her adoption fee sponsored, which may or may not make a difference for a potential adopter. I know this goofy, sweet girl will make a wonderful best friend for the right person. If you think you might be that person, you can apply here.

Due to the business of my life at present, I don’t always manage to post a Daisy entry, but if you’d like to follow along in real time, you can see them on the Facebook at Cara Sue Achterberg, writer page.

Today I took Daisy with me for an easy run early in the morning before we were likely to encounter many people or vehicles. She did really well, though I think with her shepherdy hair, she will get hot if I run with her in the warmer months. Hopefully, by then she’ll be in her forever home.

She still doesn’t have any applications. I’m hoping that people are holding off adopting dogs until after the Easter holidays.

As our house has filled up with other foster dogs (including Thelma, a sweet pup about to deliver puppies in the next week or so), Daisy does not get as much attention. I feel kind of guilty about this and truly wish she’d let the guys near her, but there’s only one of me and five dogs. Luckily, she isn’t a high-maintenance dog and unless someone comes up the driveway, she isn’t very noisy.

I’m hoping to find an outdoor kennel for her so she can be out in the sunshine more. I’m hesitant to leave her in the puppy yard alone – I worry if something frightens her and I’m not out there, she could go over the fence. She hasn’t done anything to suggest she would do this, but I’m more than a bit paranoid about loose dogs.

After a week of living in the kitchen and doing laps of the island and fly-by sniffs of the guys, Daisy has let Ian pet her two days in a row. This only occurs while we are eating dinner, so we’ve had to let go of the ‘no dogs at the table’ rule for now. Frankie and Flannery watch from the gate and only whine a little, they’ve long ago learned that special exceptions are made for our Daisy.

This is especially cool because while I was gone on Friday to see Addie perform in Hair at her college in New Jersey, Daisy refused to leave her crate no matter how gently and treat-filled Ian asked.

She is doing well in other ways, too. This morning she and I walked over two miles on the road and other than freezing in place and staring at passing cars, she was just a happy-go-lucky pup, sniffing along and occasionally zooming a silly circle around me. 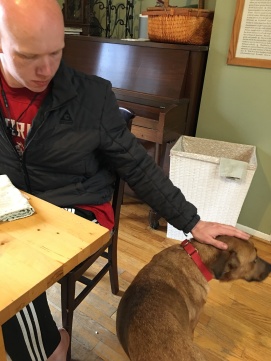 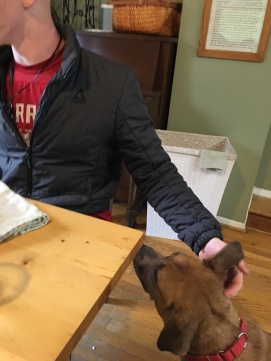 Today for reasons only known to Daisy, she de-stuffed her football. Maybe it started on our morning walk. I didn’t realize she’d brought her football (usually she leaves it inside) and when she dropped it, I didn’t retrieve it. I was tired and rushed and maybe not in the mood for our usual game of I-drop-it-you-pick-it-up-I-grab-it-from-you. I left it where she’d dropped it, planning to pick it up on the way back.

She fretted about the football and kept glancing back at it again and again, but I assured her we wouldn’t leave it outside all day and she eventually took care of business.

On the way back, she snatched it up and trotted back into the house with it. She then proceeded to begin destuffing it. As anyone with a dog with serious chewing habits knows, there is an inordinate amount of stuffing inside even the smallest of stuffed objects. Our kitchen now appears to have received a snowfall, yet the football is not nearly deflated.

Why would she destroy the object of her obsession? Is it symbolic? Is she proclaiming that she no longer needs the security it offers? Did the smell finally overwhelm her? Or could she no longer endure the question of where that squeaking was coming from? (the squeaker survived intact!)

A mystery for the ages.

Daisy completed the destruction of her football, shaking out all its contents and now ignoring it like it never mattered. And then yesterday she began dragging her bed out of her crate. Nick and I wondered if maybe she had decided to move out. Maybe these actions are her little personal revolution.

These days her loyalty is mostly to her deer antler (the real one Frankie found in the woods) and to me. I seem to be the center of her world. It’s flattering but also worrying. I want her to open up to the guys – so they are the only ones who feed her, even if that means she has to wait for one of them to get out of bed while the other dogs are eating.

I share my affection with her but I also demand that she not yank my arm when she gets excited on the leash, that she sit on the porch for a few moments before we set off on a walk instead of bounding across the stones dragging me behind. While I do forgive a lot because of her history, I still expect manners. So we’re working on that.

If you’d like to know more about my blogs and books, visit CaraWrites.com or subscribe to my occasional e-newsletter.

If you’d like to know more about the book, Another Good Dog: One Family and Fifty Foster Dogs, visit AnotherGoodDog.org, where you can find more pictures of the dogs from the book (and some of their happily-ever-after stories), information on fostering, the schedule of signings, and what you can do right now to help shelter animals! You can also purchase a signed copy or several other items whose profits benefit shelter dogs!

If you’d like to know how you can volunteer, foster, adopt or donate with OPH, click here. And if you’d like more pictures and videos of my foster dogs past and present, be sure to join the Another Good Dog Facebook group. 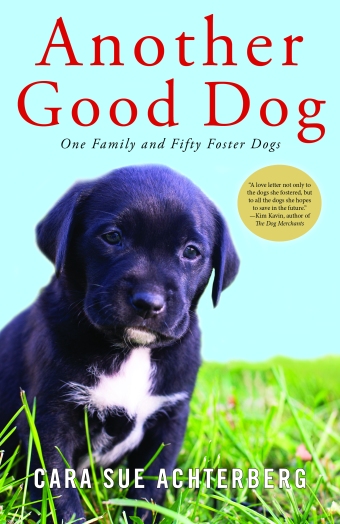 5 thoughts on “Diary of a Rescue Week Ten: Frightened Dog Getting Braver”