Don’t get me wrong – it still feels great to save a cat, it’s just….different.

Cats don’t bound up to their potential adopter (or growl at them either). There’s no carefully orchestrated meeting or a walk with a potential fur-sibling or even a question, really, about the outcome.

END_OF_DOCUMENT_TOKEN_TO_BE_REPLACED

I’ve been sitting on some great news — and dying to tell you but practicing patience.

I’ve held off because you know me and jinxes, and if ever a dog was jinxed it was Mia. A series of bad luck and bad management had created a perfect storm that led to her being with us for over a year as our foster dog.

END_OF_DOCUMENT_TOKEN_TO_BE_REPLACED

Mama Mia left for her forever home after 11 months in foster care. I still find it so hard to believe it took so long to get this amazing dog adopted.

Her adopter is a determined and patient woman, who was certain all along that Mia was her girl. It took three meet and greets, this last one happening with the help of trainer, Geraldine Peace, who you’ll recall was such a huge help with Billie Jean.

Every time I spend time with Geraldine I learn more about managing and training dogs. She was able to do in minutes what I was not able to do through two other meet and greets—introduce Mia safely to her new 9-pound senior fur-sister. At each of my attempts, Mia was just too over-the-top excited and could not settle enough that I felt safe introducing them. I never, for a moment worried that Mia would hurt the little dog. What I worried about was her unintentionally hurting her because of the size difference.

END_OF_DOCUMENT_TOKEN_TO_BE_REPLACED

A week ago, I still had four foster dogs under my roof.

That’s not so odd (for me) except that on Friday I leave for a ten-day whirlwind tour of 16 rescues, shelters, and pounds in Tennessee, Mississippi, and the tail of Missouri as part of Who Will Let the Dogs Out (an initiative of Operation Paws for Homes).

Leaving foster dogs at the house for my busy husband and my even-busier son to care for in my absence isn’t really an option. Which meant END_OF_DOCUMENT_TOKEN_TO_BE_REPLACED

And poof! He was gone.

I warned you we wouldn’t have Bo very long. They don’t make them much nicer. We had a fun week with him and packed in as much as we could, but on Sunday Bo left for his forever home.

It’s a great home with END_OF_DOCUMENT_TOKEN_TO_BE_REPLACED

We survived our record-setting weekend.

Now we just have fourteen dogs. Which we’ve had before.

Gosh, this makes me sound like a dog-raving lunatic. Which maybe I am. Or at least I feel like one after this weekend.

Just about the time I get tired of so much poop so many kisses, the puppies take off for their forever homes. All eight have forever families waiting to adopt them this weekend. If all goes as planned, I’ll be scrubbing out an empty puppy pen by Sunday afternoon.

The puppies had quite a few final adventures this week. They were visited and loved upon by a group of girl scouts on Sunday afternoon. It was a win-win. The pups were helping the girls fulfill some badge requirements, and the girls were helping to wear out the pups in preparation for their microchipping.

The microchip needle is VERY big and puppies are small, add a bit of squirmy to that equation and END_OF_DOCUMENT_TOKEN_TO_BE_REPLACED

WANTED: one adopter. Must be a long-distance runner or hiker or have a securely fenced, large yard. Must be a patient person with a good sense of humor. Must be smart and not intimidated by a smarter dog. Must be creative and willing to adapt to my needs. Must not be a person who is overly attached to their belongings and/or is a neatnik and never leaves valuable items lying about. Must be kind and understanding and willing to accept that we all have our own histories, habits, and hang ups. Must be a one-dog kind of person. Must be allergic to cats (okay, maybe not allergic just not inclined to ever own a cat). Proclivity for road trips and adventures, a plus. Adopter should be looking for a dog who not only provides excellent and enthusiastic company, but also personal protective services. Lifetime commitment required.

That’s the ad that Gala would have me place. We discussed it on our long run this morning. 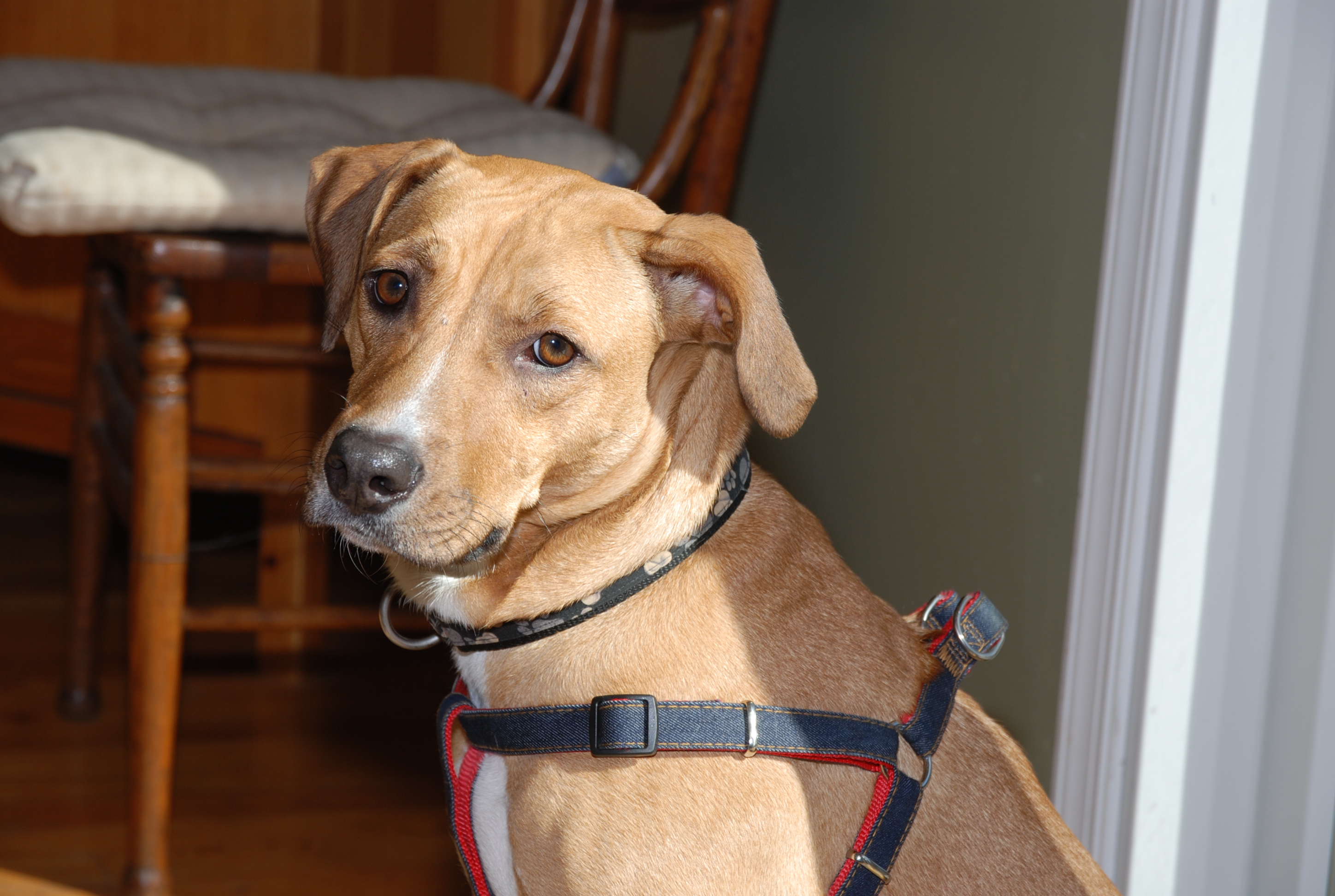 She is breaking my heart. END_OF_DOCUMENT_TOKEN_TO_BE_REPLACED

Sometimes I’m slow on the uptake. This week’s adventures have reminded me that I am still a rookie foster mom over here. The lesson is a repeat from Galina days, but it appears I needed to learn it again. And the consequences may mean more than a three-dog weekend, they may lead to a three-dog month.

Here it is: Never look a gift-adoption in the mouth. Or something like that.

On Wednesday the perfect adopters (and I mean perfect like I made them up myself) were approved to adopt Carla. I had a lovely conversation with her future adopting mama. We made plans for the family to meet and adopt Carla on Thursday. Hooray!

And then, because there were actually two other applications in the system on Carla, I made the bold move of agreeing to take a new dog from this week’s transport.

Symphony is adorable and part Border Collie – a breed I have always coveted.

She even has a great story (a street dog picked up by paramedics), reminds me of the dog on the Little Rascals, and looks to be the perfect size playmate for Gracie. Carla is too big, Wheat Penny was too small, but Symphony looks just right. All was well with our dog world.

And then Thursday morning I received an email from the potential adopters saying there had been a drastic shift in their situation and they would sadly be unable to adopt Carla at this time. Whoosh. (That was the rug being pulled out from under my carefully laid plans.) END_OF_DOCUMENT_TOKEN_TO_BE_REPLACED

The house is very quiet. For the past month, whenever the house was quiet I would panic – what has she found? What is she chewing?

I have to confess that it’s somewhat nice to get dressed and not worry about setting your socks down on the chair for a minute and having them disappear to the far reaches of Galina’s crate. It’s also nice to finish writing a note and leave the pen on the coffee table with no worries about that loud crunching sound you hear a moment later.

But I miss her. I miss the happy little whimpers she made when I opened her crate in the morning and she crawled out like a soldier under fire to lay as a little fur ball of ecstasy at my feet. So happy to see me, she couldn’t even stand up.

I watched basketball last night with no little snuggle muffin to make it worth my while (and also prevent me from snacking on the couch).

There were no late night dog-chasing-dog shenanigans. Gracie went to bed uneventfully. It’s too quiet.

But…reports are that Strider, the dog formerly known as Galina, is happy as a little clam in her new digs with her forever family.  Her new mommy sent me a video of Galina rolling in the leaves of her new yard which is fenced in so she can run leash-free and reach the speeds she could only attempt while she was here which inevitably led to such a sudden end that I worried the leash would snap her neck.

It was a topsy-turvy weekend for us. We discovered Friday afternoon that Galina’s newest adopter had chosen another dog. Once again, hopes dashed. This seemed to be a repeating pattern for our little girl. But by Friday evening I received an e-mail that there was a new adopter approved! I was in the middle of a presentation at a nearby college, so I sent a quick note to the potential adopter.

I knew that Donna and Geoff were the perfect parents for Galina when in response to my honest warning about Galina’s chewing habits, Donna wrote, “We know about the chewing. Our previous beagle mix chewed through our home. I didn’t own a pair of flip-flops without teeth marks in them!”

Sometimes this world seems utterly random and at other times, like this weekend, I see fate clear as crystal.

In preparation for Donna and Geoff and Galina’s new brother, Gimli, to arrive, we put Gracie in the garage. It seemed like a cruel thing to do, but Gracie, you will recall, has social issues with other dogs. I didn’t want her to dominate the meeting of these two little soon-to-be-bestest-buds-ever. And it was too many G-dogs in one room. Kidding. Gracie seemed to sense she was about to reclaim dominance of her domain, because she was surprisingly calm and quiet in her quarantine.

Gimli was Galina-size and cute as button with those crazy taco-bell dog ears. Donna and Geoff worried he would be protective and aggressive with Galina, but she won him over in mere minutes. That’s my girl.

I was super happy to see Galina warm up to Donna and Geoff even faster. When she meets new people, Galina generally hangs back, shy and unsure, until she gets to know them. Not with these two. It was almost like she recognized them. Hey, it’s Mom and Dad! She was all over them, completely relaxed and happy to follow Geoff when I gave him her leash so we could take the dogs for a walk.

Now that she’s gone, I keep thinking of things I should have told Donna and Geoff. Sometimes when you’re walking her she’ll duck from certain cars and then spring after them when they pass. I did remember to warn them that she loves to eviscerate toilet paper rolls, so they should never be left loose and available. (Sadly, Galina was not able to train my children to put the roll on the holder in her time here, but I had been hoping…)

I forgot to tell them about her favorite toy – the one that you can hide a treat inside. We used it whenever we needed to keep her out of trouble and occupied for at least ten minutes.

Before they left, Ian selected one of Galina’s stuffies from the toy collection and her favorite sock that had not yet been completely unraveled and gave them to Donna and Geoff, along with the rest of the bag of her favorite bacon-flavored treats and the probiotic powder that OPH gave us when she arrived (my husband calls it “puppy PCP” because that’s what it looks like and he’s a Neanderthal).

I’m sure it won’t be all smooth sailing, Galina is an imp, but I do believe she’s found her forever family. I had a lump in my throat all day, but no tears. I think I held on to a piece of my heart throughout our whole time with Galina because I knew this day was coming. I had to remind myself again today that Galina leaving meant we could help many more dogs. She was the first and so she’ll always hold a special place in my heart. Maybe that’s the part I was holding on to.

[New foster comes this Friday. She looks like Gracie’s mini-me!]