Back from vacation and Carla and I had a SLOW run today (more of an amble). The humidity gets us both. For once, she wasn’t leading the way and there was no sprinting or any kind of bounding. I thought she might like a dip in the creek but when we got there, the weeds were high and she took a look at the stickers and gave pause, so we even skipped the swim. Lazy, lazy summer. 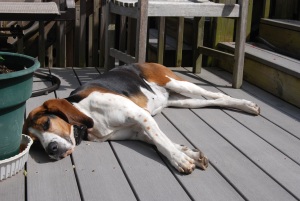 Carla is made for lazy summer. She’d look gorgeous lounging on anyone’s porch, but has been on mine much too long. I can’t help but worry that it will be a difficult transition for her once again when her forever family finally finds her. C’mon, people, pick her! She is so ready to shower her dedication, love, and solid snuggle with you.

Carla’s become such a part of the scenery around here that we decided to jump in and get a new foster from the next transport. As it turns out, we’re getting not one, but four new fosters.

We were on vacation riding the Cape May Lewes Ferry on a gorgeous hot sunny day when I irresponsibly took advantage of the free wifi to check e-mail. I could blame it on the rum drinks or the heat or the high of being on vacation with good friends, but when the pictures appeared in my feed I had to have these puppies. 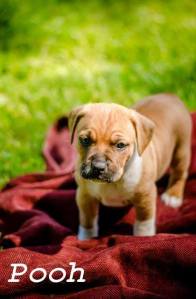 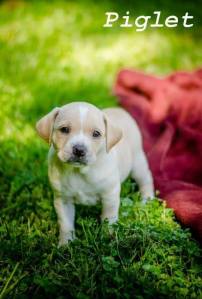 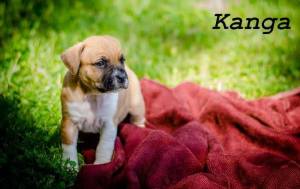 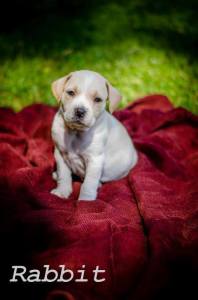 I know. You want them, too. My kids were over the moon about fostering them. I’d promised them we would foster a puppy this summer, so why not four? The way I see it is – if we have to quarantine one puppy for two weeks, why not four? I’m sure you’ll hear many stories of me eating those words in the weeks to come.  We’ve had Carla so long, the memory of cleaning up poop has faded, much like the pain of childbirth, and I’m ready for this. (I think.)

The puppies arrive on the 26th so we have a week to get things ready. This will be the push that finally forces me to clean out my large cluttered mudroom. I have everyone’s word that they will help with this adventure. I’m hoping that their word is better this time than it has been in the past. I distinctly remember hearing similar vows in regards to the gecko, beta fish, and bird that led to prolonged reminders on my part and eventual abdication on theirs. Sadly, all the small critters in cages lived short, tortured lives in our care. Everything will be different with the puppies! (cue the pretty music and birds singing.)

The first thing we had to do in preparation for the puppies was re-name them. With over 4800 dogs in the system, their Winnie the Pooh names were taken long ago. I was sad when I heard this news because the Winnie the Pooh names had been the clincher for me. We are a Pooh family. The baby nursery was all Pooh, the first videotapes (dating myself here), cds, books, and even computer games were all Pooh. I sang the song, “Christopher Robin” to my little cherubs when I tucked them in at night. My oldest son’s middle name is Christopher after you-know-who, which was a compromise because I seriously considered naming him Christopher Robin. (I told him about that this weekend and my now 18-year-old, said, “That would’ve been pretty cool.” Only my kid.)

So, I posed the question of names to a group of my dear friends while sitting around a table in our favorite brewery (Dogfish Head in Rehoboth). We considered using the names of the beers we were sampling, but decided that they didn’t sound like puppy names. No one would want to adopt Noble Rot or Hellhound.

After very little deliberation, we chose Jillie Bean (childhood nickname for one of the kids we were traveling with), Chick Pea (it just sounds cute), Lug Nut (a friend once had a dog named this and I’ve wanted to use it ever since), and Marzle (the main character in would-be Christopher Robin’s newly self-published book).

I’m sure it’s going to get pretty exciting around here, so stay tuned. And please send your positive juju out in the hopes that Carla finds her forever home before the puppies take over. She’s too big to get lost in the scuffle, but she deserves her own place and her own people to love. If you’d like to touch her gorgeous velvety ears or get a slobbery (but polite) kiss in the kissing booth, she’ll be at Codorus State Park on Saturday for the Codorus Blast. Just look for the OPH booth.

This weekend we were in Virginia wine country and decided to do a little winery-hopping. We stopped in Chrysalis Vineyards where OPH will be hosting their big fundraiser Bark, Wag, and Wine this September. It’s a gorgeous place with excellent wines, so we very much hope to attend. (You should, too!)

The day after we visited Chrysalis, we stopped into Barrel Oak Winery whose very name invites dogs (BOW – get it?) BOW was a bit over-the-top-dog-friendly.

In fact, on this day they were overrun with Westies. For those of you unfamiliar, these are small wiry-haired white dogs that yap. 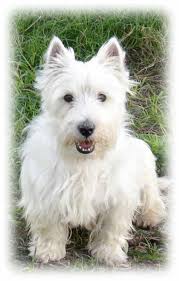 There were Westies everywhere you looked and it made for very intentional foot travel as I didn’t want to step on one.

There were a few dog-sized dogs visiting the winery as well and compared to the somewhat frenetic Westies they seemed like large, lumbering behemoths. I don’t sound like a dog person, do I?  I’m probably exaggerating and maybe it was just that I missed my BIG foster dog of the moment.

Nick and I kept whispering, “We should have brought Carla – she would shut these little guys up with a single booming bark.” Bringing Carla would have been like showing up the mini-bike rally with a tricked out Harley.

Upon further investigation I discovered that it was Westie Rescue day at the winery. END_OF_DOCUMENT_TOKEN_TO_BE_REPLACED 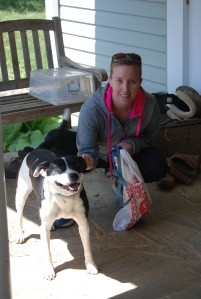 I’d be sad, except she’s found the perfect family. She’ll have kids to adore and be adored by, an active mommy, and no cats that are never in the mood to play anyway. This one was easier. I don’t worry about Stitch. I know what a good dog she is. I know she’s sweet and obedient and smart as a whip. Who wouldn’t love her? Especially cute kids like these… 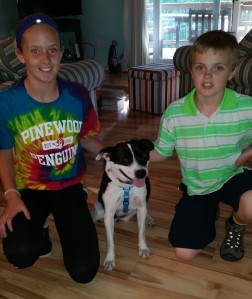 I’m happy for Stitch, so the lump in my throat is a little easier to swallow. What a great dog. What a lucky family. Amy e-mailed me tonight and said they’ve decided to keep the nickname we gave her, Stitch. We’re honored to have named such a stellar pup. Happy trails my little Stitcheroo! 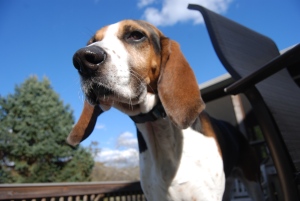 She may be here for a while. We’re okay with that. I want her to also find her perfect home. She will be harder to place and I’ll definitely worry more for her. She needs this next move to be her last. A dog can only have her heart broken so many times.

Carla will need someone who will give her plenty of exercise, indulge her affinity for soft beds, and not mind the fact that she barks. (And barks.). She has a lot to say.

When I’m slow mixing up breakfast, she swirls around my feet, chastising me excitedly, “Get a move on lady! My granny could whip that up faster than you with one hand tied behind her back!” The sheer volume is stressful and makes it hard for me to focus. Does she get the coconut oil in the morning or the probiotics? No matter, I’m certain she’d eat anything I served. END_OF_DOCUMENT_TOKEN_TO_BE_REPLACED

A very wise horse-whisperer friend of mine, a cowboy named Brad, once told me that when training any animal you need to make the right choice the easy choice. This concept was a great help to me while training my independently minded horse and even applied nicely to teenage children. I’ve recently discovered it is an excellent strategy with Carla as well.

Carla has earned the nickname Goldilocks at our house because she likes to try out all the chairs, sofas, and beds in search of the best spot. 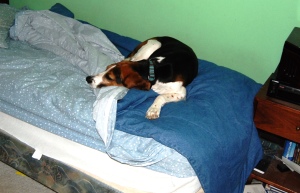 In the playroom… (amidst the noise) 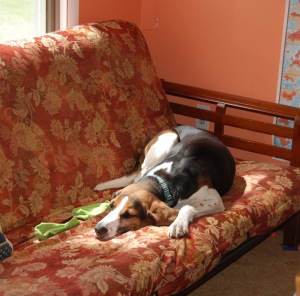 In the living room… 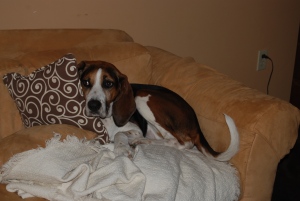 On my bed! (this picture gives you a point of reference as to her size – this is a queen size bed) END_OF_DOCUMENT_TOKEN_TO_BE_REPLACED