What a week it has been for Fruitcake! He is making great progress. A week ago, I took him to the vet because he couldn’t sit, stand, or walk. Whenever he tried, his hind legs did a split and flailed around helplessly like flippers. The vet told me what I’d already guessed(thanks to google) – he most likely had Swimmer Puppy Syndrome. Luckily, he only has it in his hind legs, many pups have it in all four.

She encouraged me to try to make a sling to support his body and allow his legs to get under him. She also said that just moving his legs into the proper position as much as possible would help. We needed to build muscle and reinforce his muscle memory. She told me that we might also consider putting hobbles on his hind legs by tying the legs together so they couldn’t slip out sideways. And then she said, “Because of his deformed feet (he has six toes on each back foot), there might be something else going on in there. We’ll just have to wait and see and maybe take xrays when he’s older.”

I went home with my mind spinning. How could I fix this? I set Fruitcake down in the puppy box with his siblings and watched him flatten out like a pancake, with his hind legs out to the side and his stomach spread across the floor. I don’t think a normal puppy could put their legs in that position even if it wanted to, so maybe there was another way of looking at this. Maybe we could say that Fruitcake is very special – he has six toes on his hind feet and he can do a split! With those big boots and flexible legs, certainly he could learn to walk.

I spent a good portion of Friday night and Saturday morning sitting in his box repositioning his feet underneath him again and again and then holding my hands on either side of him to keep them from slipping sideways. By Saturday evening he was sitting up on his own. I decided this was HUGE progress. But what else could I do?

Here’s a video of Fruitcake after he mastered sitting up.

I wrapped a scarf under his belly as a sling and held him up so that he could get his feet underneath himself. This was awkward and he spent as much time wriggling sideways to chew on the scarf as he did standing up. Again and again he squirmed and then his top heavy front end slid forward and he landed on his nose.

I took to the internet looking for more ideas and posted on the OPH family page to see if anybody else had ever had a swimmer pup. Ideas and sympathy flowed. The hobbles seemed like the best plan, but even with the vet’s instruction and the internet photos, I couldn’t figure out how to make hobbles out of vet rap and put them on my squirming puppy. Each time I attempted, Fruitcake screamed and fussed and Estelle grew frantic.

I texted my neighbors and Chris, who is also my vet, stopped by after work and brought tape and showed me how to make hobbles for Fruitcake. 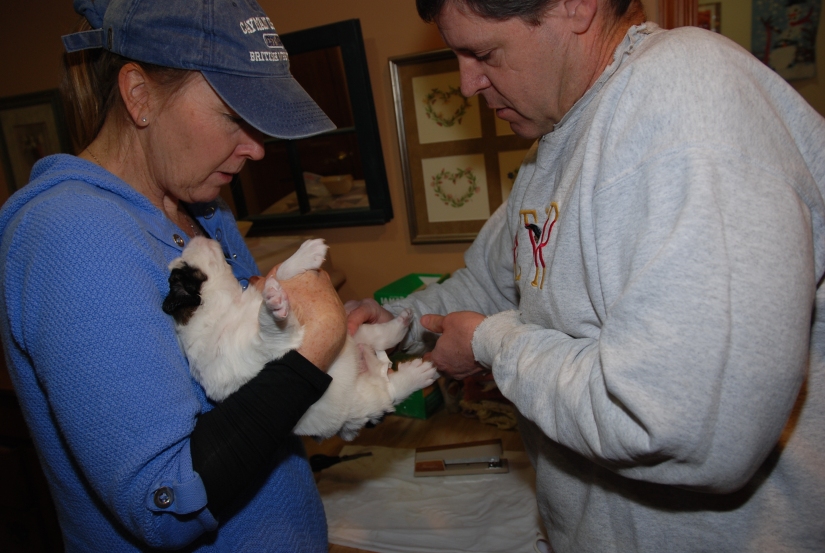 With the hobbles on, Fruitcake could stand and do a slow wobbly waddle across the box before spending the rest of his time trying to figure out how to get the hobbles off . Now I put hobbles on him in the morning and he is upright and easily able to tackle his siblings or wrestle a toy before successfully getting them off about mid-afternoon. I do think they will be key in his therapy.

The same day that Chris came with the hobbles, another OPH foster, Debbie, sent me a link to an article about bulldog puppies with swimmer syndrome. The breeder had built a chute that was just wide enough that the puppies could brace their legs against the sides and walk! It was amazing. I showed the article to Nick and he built a chute for Fruitcake. The first time we put him in it, Fruitcake was uncertain. He was cranky and complained about the confinement. Finally, he simply lay down and slept.

The next time, I put him in the chute he walked the entire length of it—his tail wagging and a look on his face that said, “Wow! Look at me!” END_OF_DOCUMENT_TOKEN_TO_BE_REPLACED

When I woke last Wednesday morning and the election was finally over, I was devastated. I looked out at the rain and it felt like my best plan of action was to crawl back in bed and not get up for four years.

But then I had another thought.

“Suck it up, Buttercup,” I told myself.

I can handle this. And besides, I’m not always right. It is my greatest hope that I am completely wrong on this one. Now, don’t let that sidetrack you. This is not a political post. That’s just a confession of where I was when I made a crazy decision.

I got out of bed, had some caffeine and changed the notifications on my Facebook (I did put on my big-girl panties, but that doesn’t mean I could stomach the taunting or rejoicing of those for which it was a bright sunny morning).

And then I decided what I really needed was some puppies. That would put everything in perspective for me, or at the very least, it would be a grand distraction and a place to channel my excess emotions. END_OF_DOCUMENT_TOKEN_TO_BE_REPLACED

A very wise horse-whisperer friend of mine, a cowboy named Brad, once told me that when training any animal you need to make the right choice the easy choice. This concept was a great help to me while training my independently minded horse and even applied nicely to teenage children. I’ve recently discovered it is an excellent strategy with Carla as well.

Carla has earned the nickname Goldilocks at our house because she likes to try out all the chairs, sofas, and beds in search of the best spot.

In the playroom… (amidst the noise)

In the living room…

On my bed! (this picture gives you a point of reference as to her size – this is a queen size bed) END_OF_DOCUMENT_TOKEN_TO_BE_REPLACED

I’ve heard it said, “I aspire to be the kind of person my dog thinks I am.”

Well, I aspire to be the kind of person my beagle is.

Is it dinner? OH I’M SO HAPPY!

I can’t chew on the toothbrush? I’M SO HAPPY NOT TO DO THAT!

It’s time to go out? OMG I AM THE HAPPIEST DOG EVER!

I have to go in my crate now? I’M STILL HAPPY!

You came back in the room after being gone one minute? I’M SO HAPPY TO SEE YOU!!!

She’s ear-flopping happy in every situation. I would love to have her enthusiasm and sunny attitude for just a few hours, let alone, full-on constant. END_OF_DOCUMENT_TOKEN_TO_BE_REPLACED