I know I don’t say a lot of positive things on the blog about my personal dog, Gracie. In fact, she is many times the foil in my stories. And for good reason as she is less than welcoming of any foster dog we bring home.

Other than that, it’s many times hard to find a redeeming quality in this dog we’ve had for eight years who still rolls in horse manure every chance she gets, spends entire days barking at imaginary dangers in our neighbor’s yard, chases the cats, has never (ever) come when she is called, and threatens to take out the poor UPS guy every week. (She bit the Fed Ex guy, so we don’t see him very often anymore.)

Because of the horse manure-rolling issue, she isn’t allowed on the furniture. As you would expect, this means that her days revolve around finding a way onto the furniture (this despite the fact that she has three dog beds to choose from). To combat this, bedroom doors are kept closed and every piece of furniture in my house is loaded with barricades – boards (expressly kept in the house for this task), upturned cushions, books, even shoes if that’s all I can find. Suffice it to say, our house will never be on a home tour.

She has periodic barking fits aimed at nothing visible to the rest of us (or the foster dogs, some of whom will back her up and others who only look at her like she’s possessed). She will run up and down the steps, circle the living room, racing from door to door and back to us as if she is clearly trying to tell us something. Sometimes when she is on a barking tear, Nick will tease her- “What is it Lassie? Did Johnny fall down the well?” 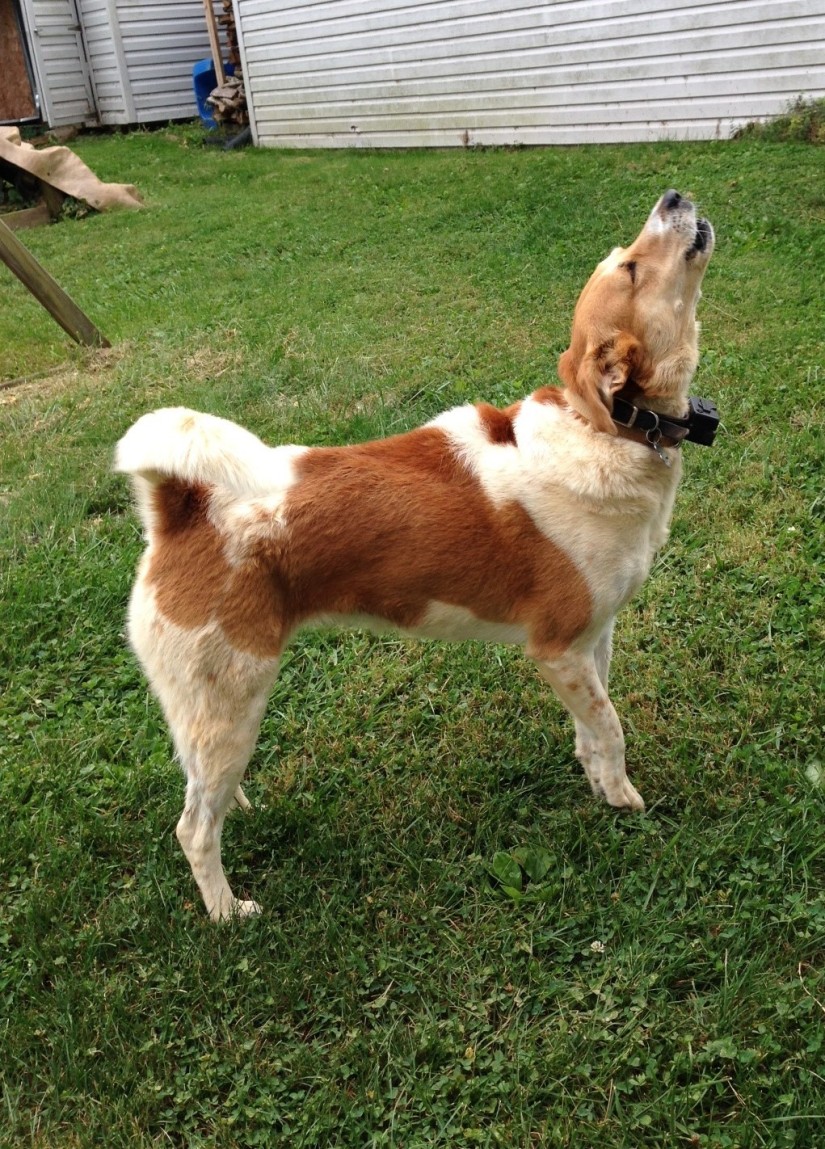 Whenever I complain about her, the kids come to her defense. They love her. (Although they rarely want to go track her down in the pouring rain when she’s run through her invisible fence and spent a few hours wallowing in horse poop.)

It was late, probably close to 3am, when she started barking like the lune she can be. I felt like I had just fallen asleep, having stayed up after midnight waiting to hear the sound of the car in the driveway (driven by my 16-year-old starlet coming home from a cast party 30 minutes away in a nasty storm).

Gracie was barking intensely, racing up and down the stairs between our door and the living room. I nudged my husband and got no response. I waited a few minutes hoping one of my teenage children might still be up and go deal with Gracie’s issue. Nothing. So I dragged myself out of bed and opened our door.

Gracie ran down the stairs still barking frantically. I followed her down, intending to put her in her crate, but when I reached the bottom of the stairs, I heard it. A puppy was wailing.

When I opened the door to the puppy room, the sound was crazy loud. All the puppies were up and Schuyler was whining, pacing frantically around the pen. It took me a minute to spot the source of the screaming. Peggy V had her head stuck between the puppy fence and the board we use to extend the puppy pen. The fence is connected to the board by small carabiner clips. I never imagined there was room for a puppy in the small gap between the fence and the board, but apparently there is. Much like a monkey who puts his hand in a jar, Peggy had somehow gotten her head squeezed through and when she straightened up and pulled back, it didn’t fit back out. She was trapped.

I quickly lifted the entire wall and board up and slipped her out. Schuyler gave her a complete once over and then licked her until she calmed and started nursing. I snuggled a few puppies to settle myself down, then barricaded the corner so that no puppies could get trapped before we had a chance to solve the problem in daylight.

I gave Gracie a treat and long talking to, telling her that she was my hero. Had Schuyler gotten too frantic and pushed at the walls of the pen, she could have inadvertently strangled her own puppy. I thanked my lucky stars, the powers that be, and my sweet dog who saved the day (night).

And then I lay awake for a long time thinking how crazy it is that I’m allowed to take in these precious pups and trusted with their care, yet I have no idea what I’m doing. I’m learning as I go and know I’ll do better next time and will never rig-up a puppy pen without thinking carefully about how all the panels are connected.

I remember having similar feelings when I fumbled with my own babies years ago. Leaving the hospital with my first one, I thought – they’re really letting me just take him? Shouldn’t someone make sure I know what I’m doing?

But I figured it out and while there were a few close calls, they all survived toddlerhood more or less intact. I suppose that’s the way it’s always been. While we have plenty of help and ideas and books and resources, when it comes down to it, we can only do the best we know how to do. And when we know better- we do better. (RIP Maya Angelou)

Five more weeks with these little precious babes…good thing we’ve got Gracie to keep them safe.

This week’s updated mugshots (I apologize that some are a little fuzzy, this was a solo gig and not all my subjects were inclined to cooperate) –