Our house is much quieter. (for now)

Rooney finally went home with her new forever mom after a long wait. They met over a week ago and fell in love, but we had to wait for Rooney to finish her antibiotics and be 100% healthy so she could go home. Which she did on Friday. And we all miss her. My little brother will be very happy to know Rooney is in the Air Force now! Her mom is one of America’s finest.

Before she left, she, Lucy, and Obie had a fun week.

And here’s Rooney and Obie not sharing a pumpkin: END_OF_DOCUMENT_TOKEN_TO_BE_REPLACED

I just forced myself to stop playing with the puppy-doll and get back to my desk. Obie is VERY hard to resist. He loves to be held. I wish I’d kept my baby-sling because I’m positive he would be super happy snuggled in it accompanying me about my day. Being the lone puppy is not easy, even despite the bags of toys he received this weekend!

This morning I lunged him in the side yard with my longest leash. If you’re a horse person, you might be familiar with that term. It’s when the person stands still and a horse on a lungeline works in a circle around the person. Obie lunges very well, also. He zooms around and around and around. When he really gets going, he almost looks like a rabbit because his hind legs are reaching in front of his front legs at times. 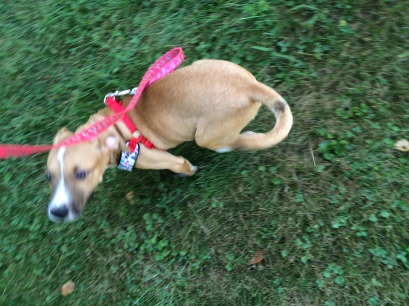 Kind of like a wind-up toy, this burst of energy expels itself fairly quickly. When he’s finished, he’d like you to pick him up and carry him around, thank you. All day, would be his preference. Obie is pretty much THE best snuggler I’ve encountered. I think that’s remarkable considering he’s a puppy (and most puppies prefer to keep moving). But if you’ll just hold him against your heart with his head tucked under your chin, he’ll be content forever. Yup, definitely a puppy-doll. He’s great therapy for this mom who is missing her oldest kiddo who just left for his second year in college.

Rooney has found her forever family, but is hanging out with us an extra week to complete a course of antibiotics to hopefully clear up the secondary infection she developed after her UTI. No one minds because Rooney is a most gracious guest. Ever since the end of the pee wars, she has been a model foster dog. END_OF_DOCUMENT_TOKEN_TO_BE_REPLACED

I’ve had about enough of the pee wars. Unbeknownst to you, this quiet war has been waging in my kitchen for three days. I don’t know who started it. I don’t know how it will be ‘won,’ but I’ve had entirely enough of it.

So today I armed myself. I bought a doggie diaper. I’m not sure yet which dog will be wearing it, but I’ve decided to place blame on the dog who should know better, so here she is modeling it for you:

Let me back up.